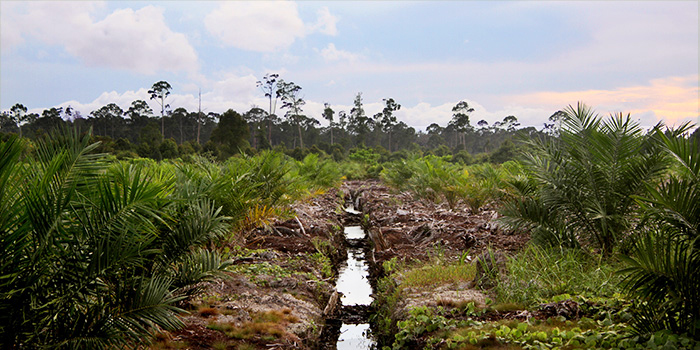 Draining tropical peatlands for oil palm plantations may result in nearly twice as much carbon loss as official estimates, according to a new study by researchers from the University of Minnesota Institute on the Environment and the Union of Concerned Scientists in the journal Environmental Research Letters.

Peatlands — waterlogged, organic soils — have developed over thousands of years as carbon storage systems. In Southeast Asia, peat swamp forests cover about 250,000 square kilometers, a land area about the size of Michigan. In the past 15 years, peatland forests have been rapidly drained and cleared to make way for oil palm and pulpwood plantations. Draining exposes the upper peat layer to oxygen, raising decomposition rates and soil carbon losses. Most of that carbon is emitted to the atmosphere, speeding up climate change.

Major international companies that buy and sell products sourced from peatland plantations have committed to reducing their climate footprints. These companies can now trace a product through the supply chain back to its source. Consequently, specific information about the carbon balance of a producing plantation helps companies and consumers better understand the climate implications of purchasing choices.

The researchers compared two measurements of carbon loss: subsidence and mass balance. To find the subsidence rate, scientists measure how much the land has sunk over time and how much carbon is stored in the soil. Subsidence models alone cannot inform the global warming potential of peatland drainage.

Mass balance models estimate carbon emissions from the balance of carbon gains such as leaf decomposition and losses such as soil carbon dioxide emissions. With this method, both carbon dioxide and methane — a much more potent greenhouse gas — can be measured, permitting more accurate global warming potential assessments.

Carbon losses calculated from mass balance and subsidence methods differed substantially for oil palm plantations. At plantation drainage depths of 70 centimeters, the annual rate of carbon loss determined from the subsidence method is about 20 tons of carbon per hectare per year. This is almost twice the rate of 12 tons of carbon per hectare per year that the International Panel on Climate Change uses to calculate emissions from oil palm land use. This rate, as put forth in the 2013 Supplement to the 2006 Guidelines for National Greenhouse Gas Inventories: Wetlands, is partly based on the mass balance method.

The researchers caution that additional field studies are needed to reconcile these estimates. “While our calculations take advantage of an exciting set of newly published data, a serious lack of research in tropical peatlands means that such estimates of peat carbon loss from plantation systems remain uncertain, and are frequently based on assumptions rather than empirical measurements,” Carlson said.

Water table depth is only one of many factors, such as fertilizer application, that should be considered when quantifying carbon losses from cultivated peatlands.

Key findings of the study:

The authors emphasize that reducing greenhouse gas emissions from peat requires preventing plantation expansion into intact peat swamp forests. “Our findings lend weight to the idea that draining peat soils should be avoided at all costs, due to the impact on global climate,” Goodman said.

The article, “Modeling relationships between water table depth and peat soil carbon loss in Southeast Asian plantations,” was written with support from the Gordon and Betty Moore Foundation, National Academies Keck Futures Initiative, and the European Federation for Transport & Environment.

U of M names Jessica Hellmann director of the IonE
What does climate change mean for Minnesota’s trees?