Earth science for your viewing pleasure 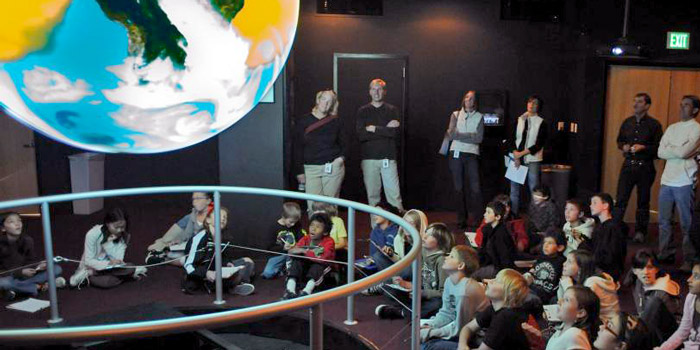 Did you know that humans eat more water than we drink? That tidbit is explained in “Eating Water,” one of four three-minute films that use data and imagery to explain scientific concepts. The films were created by the Science Museum of Minnesota as part of Science on Sphere, a project of the National Oceanographic and Atmospheric Administration that aims to explain complex environmental concepts in easy-to-digest portions.

The films feature three Institute on the Environment scientists discussing their research. Kate Brauman, lead scientist for the Global Water Initiative, explains that water used to produce our food far outweighs how much we drink in “Eating Water: Agriculture and Climate Change.” Tracy Twine, co-leader of Islands in the Sun, a collaboration of IonE and the College of Food, Agricultural and Natural Resource Sciences that monitors the Twin Cities heat island, reveals that the last time CO2 levels were as concentrated as they are now, humans didn’t exist on the planet in “Hot Air: Atmosphere and Climate Change.” And Patrick Hamilton, IonE resident fellow and director of SMM’s Global Change Initiatives, talks about how humans are facing the greatest challenges while also possessing the greatest capacity for connection and innovation to solve those challenges in “The Human Era: A World of Changes.”

As you watch the videos, imagine they are being screened on a 68-inch globe — about the diameter of a compact car — hanging above your head. That’s how they are presented at SMM and more than 100 museums, zoos, universities and research institutions around the world.

Banner photo by Will von Dauste, courtesy of NOAA