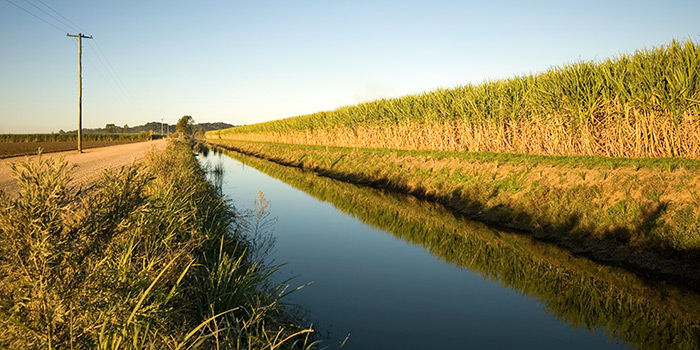 The Institute on the Environment’s mission is to discover solutions to Earth’s most pressing environmental challenges. Kate Brauman, lead scientist of the Global Water Initiative at IonE, is helping bring this mission to life. Her recent research looking at global irrigation patterns is now being used by Bonsucro, an organization working to use less water in the production of sugarcane around the world. IonE communications director Todd Reubold recently sat down with Brauman to hear the story.

How did you get started in this field?

Agriculture is heavily managed and most of the focus is on the food products that are grown. But at the end of the day crops are still just plants that need water. So when I was working with IonE’s Global Landscapes Initiative team and the data it produces around crop yield, I started asking, “How big a food bang are people getting for their water buck?” In other words, what is the “crop per drop?”

This was especially intriguing to me because I had often heard the statistic about how only one-quarter of the world’s cropland is irrigated, but irrigated agriculture produces about one-third of the world’s food.

Fortunately, it turned out that a researcher in Germany, Stefan Siebert, who has since become a friend and collaborator, had already put a lot of effort into calculating water consumption for different crops all over the world. And work from GLI had shown that crop yield varies a lot from place to place.

What we didn’t know was whether or not water consumption by those crops would vary in the same way. So I started comparing water consumption to crop yield all around the world. And it turns out that there is a lot of variation in crop per drop, even when we only compare places that have similar climates.

How did Bonsucro hear about your research?

After publishing the crop per drop paper in Environmental Research Letters, they encouraged me to make a video abstract. It was challenging but also really fun to figure out how to articulate the findings and impact of the paper in two minutes. Apparently it was worthwhile, too, because a few weeks later I got an email from Nicolas Viart, the head of sustainability at Bonsucro.

Bonsucro is made up of farmers, millers, buyers, intermediary companies — everyone in the sugar supply chain.

Sugarcane is a far-reaching commodity, grown industrially in over 100 countries for the last 200 years. In 2000, over 1,350 million tons of sugarcane were harvested from nearly 21 million hectares of farmland.

But the sugarcane sector has a dark past, with poor working conditions and negative environmental impacts often disregarded in favor of profits from sugar and, more recently, bioethanol.

Recently the sugarcane sector has been experiencing a sustainability revolution. From producers calling for increased recognition of improved practices to buyers requiring assurance about sugar production conditions, the sector started its own sustainability initiative by forming Bonsucro and developing a metric-based certification scheme.

To date, 38 mills in Brazil and Australia have been certified. This represents 3.66 percent of the global surface under sugarcane and more than 3.7 million tons of raw sugar. And Bonsucro’s goal is to be certifying 20 percent of global sugarcane production by 2020. That’s a lot of sugar!

In the summer of 2013, when my paper came out, Bonsucro was just starting to revise their production standards. Nicolas knew they needed to update the water standard, and when he stumbled across my video he was really excited about the possibility of using crop per drop as the science underlying the new production standard for water.

I was really excited about my work actually being used for something!

Water use in the sugarcane industry is an important sustainability hot spot. About 49 percent of sugarcane cropland, accounting for 54 percent of global production, is irrigated, so improving water productivity in the sector could have a really big impact.

Adapting the crop-per-drop research for use as an indicator turned out to be challenging in two very different ways. First, the standard had to be measurable. Measuring evapotranspiration is a pain — it requires a lot of expensive equipment and a bunch of computation and interpretation. Instead, we went back to the idea of variation in water consumption and in yield between climate zones such as arid versus humid and also within climate zones. We defined new climate zones and assumed every sugarcane farm would have the same evapotranspiration. Then, to figure out crop per drop the farmer only has to measure the “crop” part. They are already measuring production because that’s what they get paid for.

The second really important challenge came about because Bonsucro is a stakeholder organization and stakeholders want to adopt standards that they can attain. A farmer can’t realistically move their farm to a place with more water, but they could improve their management techniques and achieve higher yields. That’s why the standard compares crop per drop among farms in the same climate zones. The idea is to push producers to do the best job possible given their geographic constraints, not punish them because they live in a drier place.

The lead-up to publishing the revised standard and presenting it to their members was hectic. Nicolas was the one explaining how the climate zones were defined and talking about why using them means that comparing yield is really comparing crop per drop, and I had to get him just the right images and text.

He was traveling all over the place and talking with stakeholders, so I would often wake up to an email asking for a map showing a close-up of climate zones in India or the yield cutoff for a certain location in Brazil.

It was definitely not the kind of schedule regular academic research functions on — and it was exciting! All in a flurry, the standard was finally updated and the yield attainment maps were published, and then we just had to wait until the stakeholders voted.

They voted yes! The new production standards were approved. The standard says that producers need to have crop per drop as good as the best half of their peers. Globally, that means that as Bonsucro moves toward certifying 20 percent of the world’s sugarcane production by 2020, all that sugarcane will have tomeet the new water standard.

We don’t know exactly which farms will get certified, or what their crop per drop would have been before and after certification, but if we figure at least half of the farms will have to improve to meet the standard, we’re talking about getting better use out of more than 500 billion gallons of water each year.

Wow! So, what’s next for the Global Water Initiative you’re leading?

I’m really excited about where the Global Water Initiative is headed. I see a lot of benefit in providing context for on-the-ground projects.

First, we can help answer the question: “Are you doing a good job using water productively?” Because how can you even know what a “good job” is without knowing what’s possible? When GWI provides the range of crop per drop around the world, a farmer or project has a better idea of what goals to set, just like Bonsucro did.  I’m continuing to work with Bonsucro to see if we can develop a second part of the standard for water, in order to reward growers who don’t irrigate or who use the best technology available. That way, when the next iteration of the production standard comes along, we’ll be ready to go.

Second, GWI is working now to expand into sectors other than agriculture, particularly manufacturing. There’s some information about how much water an average widget factory uses — but, just like with crop per drop, there’s going to be a range of widget per drop, and we want to identify where people could get more widget bang for their water buck.

We can also think about energy per drop and households per drop — there’s a lot of room to expand.

GWI is working to figure out how big an impact an increase in water productivity can make. That helps provide guidance about the types of interventions that might be worth investing in for different regions.

And third, GWI is doing a lot of work with the Natural Capital Project on their water ecosystem services work. We’re thinking a lot about watershed investments and quantifying trade-offs and synergies between getting water and other valuable ecosystem services from the landscape.