Menu
HomeEducationAcaraTransforming the U’s food waste to gold (and maroon)

Transforming the U’s food waste to gold (and maroon) 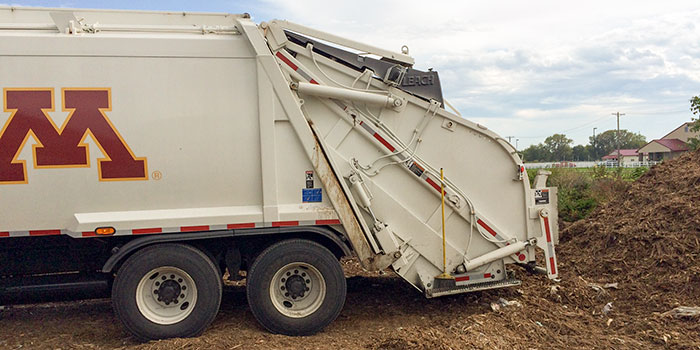 City Compost MN, the urban-based compost processing company that took silver in the domestic division, has now had a working compost site on the ground for just over two weeks. If you are thinking to yourself, “Wasn’t the Acara Challenge back in March?” Yes. “What took the company so long to get started?” That is what I want to focus on in this piece.

To give some perspective, my name is Peter Schmitt. I am the CEO and founder of City Compost MN. My wife, Katie, has also helped out throughout the startup process, but she is, admittedly, busier working her own full-time job and paying for my tuition (thanks!). I am in the final year of my dual-degree master’s program at the Carlson School of Management (MBA) and the Humphrey School of Public Affairs (MPP). Before I came back to pursue my graduate degrees, I also received two bachelor’s degrees from the University of Minnesota. Even with this much experience at the University, I can safely say that the 8 months since I began formulating this business idea with the J-term Acara class have been the most insightful and useful months that I have had here.

After a university amount of bureaucratic wrangling and a location search, City Compost MN was granted land on the St Paul campus. Hurdle number one was finally cleared. Another hurdle arose, however, when it came to securing the machinery necessary to move and turn the compostable materials (the inputs). As it turns out, the University of Minnesota has several areas that operate as individual small businesses under the bigger University umbrella. One of them, as fate may have it, was the land that I was being placed on. It was managed by a section of Farm and Field Maintenance that has independent budget, staff, and equipment. In my initial meetings with the site owner, I found out that I could hire his staff to do the turning of my compost pile, which would both save me a lot of time by not having to turn on my own AND be cheaper than I could do on my own.

Having solved the land and labor questions, two days of University food waste finally arrived during the first week of school. This represented about 20 cubic yards, which is the amount that we required based on our developed recipe. Since then, the work has really taken off. We measure temperatures and pull out contaminants (non-compostable waste) everyday. Though the pile is performing well, the amount of contamination has been disheartening. Just in the first two weeks, we have pulled out numerous pieces of metal silverware, plastic pop bottles, plastic food containers, non-compostable diapers, tin cans, rubber gloves, and Styrofoam.

As a positive note, though, our proposed biofilter has worked well and the smell has been very minimal. As we move towards winter and spring, our focus is slowly shifting towards final screening of the compost to ensure purity, as well as finalizing our packaging and securing customer orders. If anyone you know is interested in locally made, locally sourced compost starting in late May, mention our name and have them check out our website at www.CityCompostMN.com.