Getting ready for the Big Boreas Booya 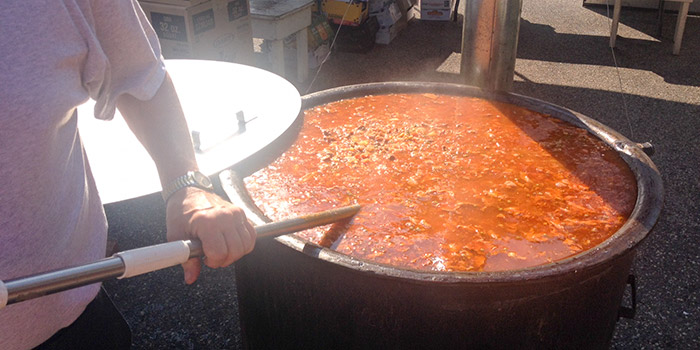 The first annual Big Boreas Booya is coming up soon! It will bring together the Boreas community with an event that has deep Minnesota roots. Booya is an upper-midwest tradition of community stew. “Booya” refers to both the stew and the event.

In preparation for the Boreas Booya, I’ve been learning about the history of booya and how to make it. Ron and Marianne Flor have been my guides through this process. The Flors are booya experts who’ve led the booya-cooking at St John’s Church in New Brighton for years. I went to New Brighton this past weekend to see first-hand how the booya comes together, learn some more about the history, and have a taste of this tasty fall treat. The more I learned, the more excited I got about the Big Boreas Booya.

The Making of Booya
Friday night I followed the smell of celery to the cafeteria at the church. Dozens of people were hard at work, peeling carrots, washing celery, and putting both through french fry cutting machines. Marianne greeted me, and noted the onions were being prepped outside “because of the smell.”

As she gave me a quick tour around the kitchen, Marianne explained the crew would prep 400 pounds of carrots, 250 pounds of pounds of potatoes, and a lot of other vegetables. She opened a large refrigerator and gestured toward the 1200 pounds of chicken that would go into the booya kettles before leading me outside to where the kettles were set up for cooking.

Ron met us outside and showed us the kettles. The booya would be cooked in nine 60-gallon cast-iron kettles. These kettles were being prepped to turn all that meat and vegetables into 540 gallons of booya. The booya is cooked outside over a wood fire. Each kettle is outfitted with a jacket and a chimney to keep the fire enclosed and to direct the smoke up.

These kettles are not easy to get, or to move. Ron explained the first kettle was acquired in 1931, the first year of the church’s booya, and the set was rounded out in the 1950s with 5-6 that were “made at a foundry in Northeast Minneapolis,” foundries that no longer exist. The kettles require a forklift to be put in place.  The booya kettles start to hint at the mysterious history of this community stew.

All nine kettles for booya

The History of Booya
According to Amy Thielen, author of The New Midwestern Table, “Like a lot of community food traditions of dubious or contested provenance, the truth [about booya origins] has been so larded with jokes and stories at to become nearly untraceable.” If you’re out in the Twin Cities and beyond during the fall, you’ll see signs for booyas at churches, VFWs and fire departments on most weekends. These are longstanding community traditions, so longstanding that people don’t remember the details of how exactly they came about.

The origins of booya generally are unclear, but I learned that the St John’s Booya go back to 1931 when a priest suggested a booya as a fundraiser for the Men’s Club. The St John’s Booya has been held every year since. New Brighton was originally a farm community (before becoming a suburb). Church families were asked to contribute ingredients from their farm, hinting at the idea that a booya can be viewed as a fall harvest festival.

At Boreas, we work to develop environmental leaders. A big part of this work is building a community to do so. Making progress on environmental leadership takes many perspectives, and making progress is hard. Community helps with both these challenges. We make connections across the University of Minnesota. These connections and the community growing out of them help support students who are willing to step up as leaders.

Why a Boreas Booya
On Sunday I went back to New Brighton to taste the booya. Before I joined the line to buy a ticket, I stopped by to say “hello” to Ron and see the booya being cooked. He’d been up all night with a crew of people cooking the stew, adding layer upon layer of ingredients and flavors. He pushed aside a kettle top and revealed the thick, bubbling, fragrant stew. Booya brings together many flavors of vegetables, meat and seasoning into one cohesive, complex whole.

A few minutes later, I sat down to enjoy my booya. As I sprinkled the traditional oyster crackers on top, I looked around at the hundreds of people gathering together to enjoy this fall treat. Booyas is ultimately about community.  As the weather starts to get chilly and the fall harvest comes in, booyas bring people together around the cooking and enjoyment of stew.

At Boreas, we work to develop environmental leaders. A big part of this work is building a community to do so. Making progress on environmental leadership takes many perspectives, and making progress is hard. Community helps with both these challenges. We make connections across the University of Minnesota. These connections and the community growing out of them help support students who are willing to step up as leaders.

I hope you will join us for the first Big Boreas Booya. If you want to learn more about the details of making booya, stop by for the noon brown bag lunch. Ron and Marianne Flor will be there and willing to discuss their booya-making expertise. Make sure to come back at 4 p.m. to taste the booya.