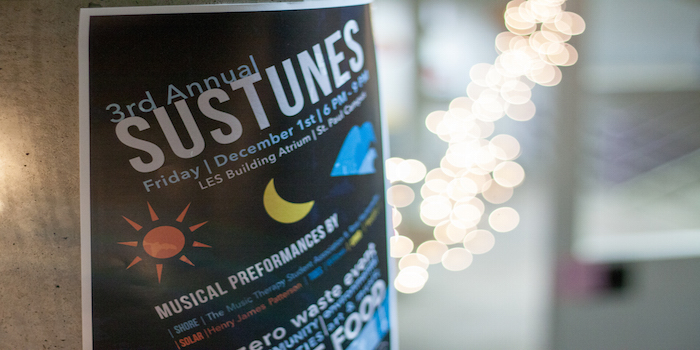 The event was kicked off by a fun and interactive drum circle courtesy of the Music Therapy Student Association featuring Ross Hackenmiller. This is how the event was opened last year and because of its popularity, we brought it back again for this year. In the next set, Henry James Patterson played acoustic songs all associated with the theme solar followed by the a capella group Vocal U with the theme lunar. The event was closed by Willows with their theme of tides, who have made an appearance at every Sustunes thus far.

The live music was only one great aspect of this event, there was also a variety of student groups, amazing food, and virtual reality. This year we had 18 student groups table all of which had fun and exciting activities to

promote their group. People flocked to the tables and the air was filled with conversation. Gandhi Mahal, a local sustainable Indian restaurant, catered the event for the third year in a row. Along with the delicious Indian food, Sustunes promoted the occasion as a BYOM (Bring Your Own Mug) event to fill at the yummy hot chocolate station that also had apples donated by the Co-op Partners Warehouse. This year was also the first time virtual reality made an appearance. Because of the LATIS program, we were able to bring virtual reality in for people to try and experience.

Overall, Sustunes was a success and we cannot wait to begin planning for next year. If you attended the event, feel free to give us your feedback to help with future planning by filling out this quick form!