A Place at the Table: Sustainability Film Series engages food justice in the U.S. food system 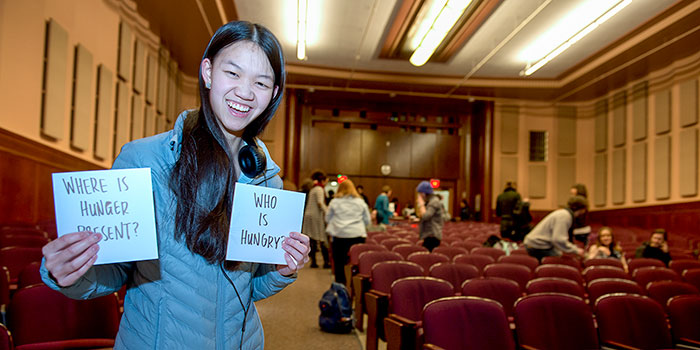 At the recent Sustainability Film Series, participants engaged with hunger and poverty in the United States with a thinking and doing evening on Thursday, March 5th, 6:30 PM at the Bell Museum.

A Place at the Table is a an acclaimed documentary detailing the social and environmental injustices between our food system, communities, poverty, and legislative processes. The event also featured a discussion with special guest speaker Michael Chaney, Executive Director of Project Sweetie Pie in North Minneapolis. “I wouldn’t call myself a gardener,” he stated, “but a freedom fighter.” Discussion ranged from Farm Bill politics, to changing things from the ground up (literally with the local youth-based gardening project within North Minneapolis’ food desert), to equity and sustainability.

The audience also was able to share their thoughts in a creative way and pass them along to decision makers in an interactive activist-art project on hunger. Participants filled in cards in response to questions like “what is hunger, why does hunger exist, what can we do to prevent hunger, how can we address food insecurity” which they then contributed to a collective mobile, to make a powerful statement about hunger and food insecurity. Copies of the cards will be sent to decision makers who are passing (or not) legislation on food-related policies and you can see the mobile at the Institute on the Environment. And hey, at the food-themed event, there was free food with a purpose. Jenny Breen, head chef at Health Foods, Healthy Lifes, featured various black bean recipes, showing how to prepare food on a budget.

Feat not if you missed the grand time. The next film in the series, Watermark, a documentary that explores our relationship with water and how it shapes humanity, will be shown Thursday, April 2 at the Bell Museum at 6:30 PM.

Many thanks to the Institute on the Environment’s Undergrad Leaders who planned and organized the fabulous time and project sponsors.