Menu
HomeEducationSustainability EducationA student’s sustainability story in the hippest city in the world…Berlin!

A student’s sustainability story in the hippest city in the world…Berlin! 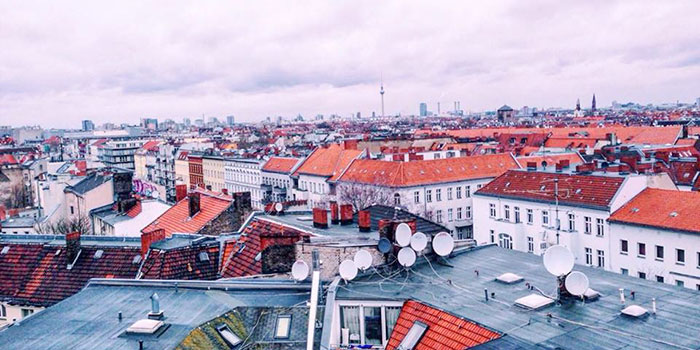 A sea of wind turbines greeted me through my airplane window as I prepared to land in the Tegel Airport of Berlin. The whirling blades lifted my spirits because it was a reassurance that I chose the right city to study sustainability. Berlin is a progressive, green thinking population, but that’s not all it is known for. It has an immense amount of green space for being an urban area, it has many sustainability oases, such as restaurants and community gardens, it contains a rich history juxtaposed with its important role in current events and, last but not least, Berlin contains some of the trendiest, hippest people I’ve ever set my eyes on.

For five months, January to May, I studied in Berlin through a partner institution in the heart of the Kreuzberg District. My mission was to fulfill 12 sustainability credits for my degree, through three different classes: a workshop, project, and seminar. My eight other classmates were from all over the nation, California to Massachusetts, each pairing their sustainability studies with different focuses: transportation, food & agriculture, forestry, political science, public health, etc. For the workshop, the nine of us created a physical product of a closed loop feedback system, which we called “A Bike Powered Garden Wall.”

Watch the powerpoint summary of our work, which includes pictures and a time-lapse video.

During my time in Berlin, I was able to explore many green initiatives in the city, such as community gardens, zero-energy houses, and cafes that serve locally grown food. Something unique about Berlin is that whenever there is an abandoned parking space or vacant lot, an overwhelming amount of people will try to fill it with green life. So even though Berlin has 3.5 million people and a dense urban landscape, it does not feel like a concrete jungle because of the countless parks and grass plots. It is filled with restaurants from various ethnic groups such as Thai, Italian and Turkish. One of my favorite cafes in Berlin was called “Roamers,” a tiny hidden gem that served me a delicious black bean egg mess in a pan with fresh arugula, carrots and other vegetables all grown in Berlin. There are vegetarian and vegan options practically wherever you go.

For anyone studying sustainability, Berlin is a fantastic place to study abroad. Besides being a city that is forward-thinking, it is cheap to live there and many Berliners are quite fluent in English. Although I also continued learning the German language there, nearly every local can speak English (other common languages include Turkish, French and Spanish). I have three pieces of advice for anyone thinking of studying in Berlin:

Overall I had a life-changing time in Berlin, which left me with unforgettable memories and a bigger belly. I cannot think of a better place for a student studying sustainability to travel to.

In January 2017, the Institute on the Environment is offering a new course to study energy in Duesseldorf, Saerbeck and Muenster. Click here for more information.

Check out the other Learning Abroad options for Sustainability programs here.