Bringing the Climate Strike to Campus 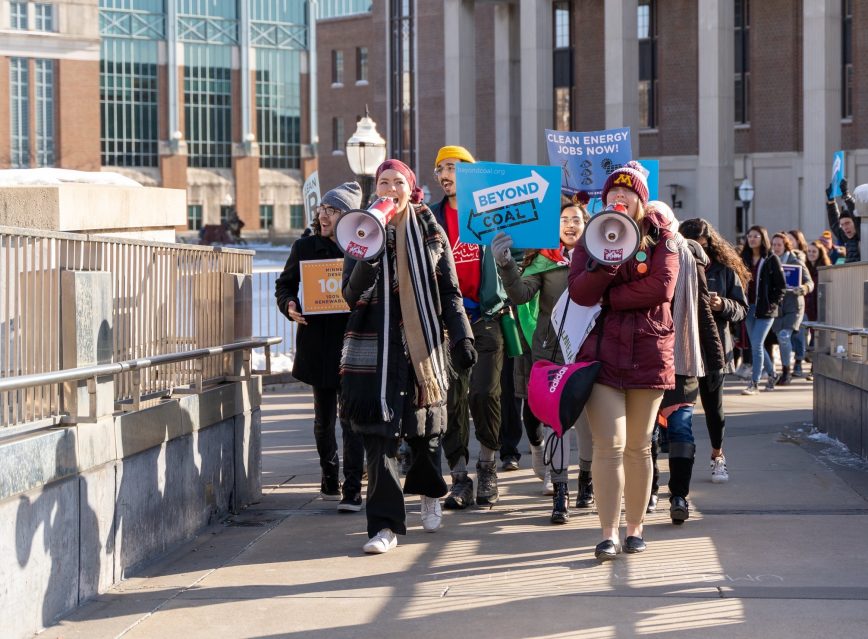 On December 6th, 2019, UMN students gathered on the back steps of Coffman Memorial Union in front of the Riverbend Plaza to call for climate action divestment by the University from fossil fuels. After the organizers had four impassioned speakers make their call to action to the crowd, the students marched to a locked-down Morrill Hall, where they were locked out under the pretense that they would disrupt the employees working inside. Sydney Murray, Katherine Schmid, and Savannah Wery are the three co-organizers of the UMN Climate Strike. Below, they talk about how they got involved with organizing the strike.

“I connected with the state organization at the strike in September, and they later reached out to me and a few others at the U about starting a chapter here. I was the only one who responded at first, then I reached out to a bunch of people, Kat and Sav joined, and here we are! I mainly got involved because someone needed to and no one else was stepping up. The September strike was the first one I’ve ever been to because I dislike big crowds…but look at me now. It wasn’t until I took SUST 3017 Environmental Justice with Michelle Garvey in 2018 that I found something I really felt encompassed every aspect of justice work, and ever since then, I’ve been more active in social justice because I learned that anyone can contribute in a meaningful way.”

Katherine Schmid is a junior studying Nursing with a minor in Spanish Studies.

“I’ve been passionate about the environment and the natural world for as long as I can remember, and was educated about the effects of climate change very early (I remember learning about the melting ice in third grade and running home to tell my family we had to use less water and energy). I attended the global climate strike in St. Paul on September 20th, which was very inspirational and motivating. I thought for a long time about how I could bring the movement to campus and if it would be possible. I knew there was a huge interest on campus with so many students passionate about climate action and wanting to help the cause. Eventually Savannah and I got together and started planning what is now our 12/6 strike. We reached out to Minnesota Youth Climate Strikes and learned we could be a local chapter of their organization, which is great because now we get to receive all their lovely support and resources as well as help them with planning the larger state-wide strikes! That’s how we met up with Sydney, who was also independently planning the 12/6 strike. So all three of us joined up about two weeks ago and we’ve been expanding the team and our network on campus since!”

Savannah Wery is a senior majoring in Political Science and minoring in Racial Justice in Urban Schooling, her future plans include becoming a social studies teacher.

“The professor that I was just meeting with runs an honors seminar called Reality 101, and so I took that as a freshman, and it was just all about human behavior and the reality of the world when it comes to energy and consumption. I took that class and then I didn’t know what I could possibly do because it was completely out of my reach, but I still really cared about doing something. So, I think that I kind of try to find lots of little ways to, so like the summer after freshman year I interned with the Sierra Club so maybe I could dip my toes into legislative/lobbying kind of stuff, and then kind of drifted away from it for a little bit, and then last Fall I did the HECUA Inequality in America program and that was all about social organizing and social change. So, after that, I was like okay, I don’t know if government or research is my area for doing something, but I definitely want to do something with the mobilizing and organizing part of it.”

Savannah gave more insight into the process of organizing the Climate Strike and creating their group’s list of demands from the perspective of the team’s policy lead.

Can you tell me why the UMN Climate Strike group was started?

So, the group started, all of the organizers attended the September 20th strike that was organized by the Minnesota Youth Climate Strike, and so, I think all of us just kind of had a realization that we wanted to see some sort of campus specific action, especially because the MN youth climate strike is intended to be local strikes. So, we kind of wanted to get together and figure out what the U itself could do policy wise and investment wise to change and do better. So, that’s kind of how we got together to start figuring out what to do.

What work has the group been doing so far?

What we’ve done so far is we put together a list of demands that include to declare a climate emergency, to establish a climate justice studies major, and then to disclose their investment information because we’re a public university and as a public university all of that should be public and accessible to students, to divest from fossil fuels, and then to reinvest in community controlled funds.

So, we came up with our demands and then we shared those with the  MSA Sustainability Committee, because they’re putting together a sustainability review for President Gabel for her climate action plan. So, they were super willing to hear what we were hoping for and had intentions of including something with divestment in their demands. Then, along with that, we’ve been working with a national organization called DivestEd, that’s been providing us coaching, resources, and support, so, we’ve had that support. We also met with President Gabel to ask her opinions on climate actions and also to ask about investment information because she’s kind of our first point of contact.

I feel like we’ve had to put everything else on the back burner because, you know, it’s finals time and we’ve been like okay, we’ll do a bunch of work and then catch up, but it’s hard to be a full-time student and trying to be an organizer on top of that. But, I think that we have a really strong core team right now, and it’s been hard because there’s not many people that we can delegate stuff to but the people we have are really willing to pick stuff up and do it. So even though it’s been a lot and it’s really stressful, it’s still coming together.

What are the long-term goals of the UMN chapter?

At different universities there’s different levels of divestment, so partial or full, and then that’s related to maybe they’re just divesting from coal or just from tar sands, so our goal is full divestment from fossil fuels. Then, the biggest thing that I want to flush out a little more next semester is what the reinvestment process will look like because we think that’s a really central area to the climate justice part of it. Especially, considering that the University of Minnesota is a land grant institution and in the development of the University there was a huge displacement of the indigenous people that lived here, and we think that we can reinvest in communities that we have incurred a debt with and invest in communities that are disproportionately impacted by climate change.

Do you have a story about how climate change has personally impacted you?

So, I personally struggle with mental health with anxiety and depression, and so for me, and we included this in the policy plan too that this is true for a lot of students that do have a lot of anxiety about climate change and what the world we are going to inhabit will look like in the next 10, 20, 30 years, and same with wanting to be an educator and working with young people and what that means for future students. So, it’s been very impactful on my mental health, very good. I think that a lot of the anxiety that comes with it is like feeling very hopeless and feeling like I can do nothing and especially with investment and government stuff that’s just so far out of my reach, but with organizing I feel like I have power and agency to do something. I have just been super inspired with the Minnesota Youth Climate Strike in general and having young people be like, no, you can’t do this, this is our future, and we’re going to be the ones on this planet, and I have been just super inspired by everything they do.

Fill out their volunteer/interest form

Email the team at umnclimatestrike@gmail.com