Menu
HomeEducationSustainability EducationClimate Strike: From the Eyes of a Student

Climate Strike: From the Eyes of a Student 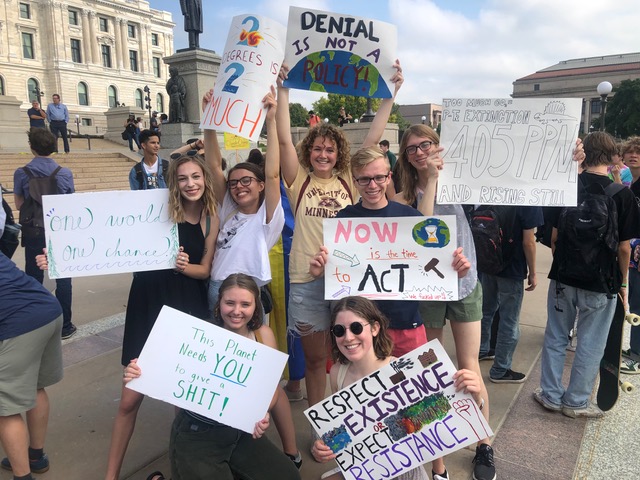 4 million people. That is how many people showed up to the global climate strikes around the globe on Friday, September 20th, 2019 to show solidarity in the call for climate action. In Minnesota, 6,000 students, parents, and other activists protested at the capital, calling for the state legislature to pass legislation that would transition Minnesota to carbon-free electric sources and block the construction of the Enbridge Line 3 crude oil pipeline. Thousands more across the state held climate strike rallies. Amid the protests, the Governor Walz administration declared the week of September 23-29 Climate Week to raise awareness about pressing environmental issues. Riding off of the momentum of the climate strikes, Greta Thunberg spoke at the 2019 UN Climate Summit, saying “The world is waking up and change is coming whether you like it or not” in a fiery speech that calls out the inactions of previous generations on climate issues.

Two University of Minnesota Twin Cities students talked about their experience and reflections from attending the climate strike in Saint Paul.

On the right is Rachel Linzbach (she/her), a third-year UMN student majoring in Political Science and majoring in Sustainability Studies and Public Health.

Question: What compelled you to attend the climate strike?

Rachel: In SUST4004 (sustainable communities) we learned about it and part of the experience was to attend the climate march on Friday. However, I was already planning on attending.

Donna: Well, I knew that it was a global climate strike, so it wasn’t just within the US, so because I wanted to show my solidarity with people around the world who are also experiencing the effects of climate change I thought it was important to show up. I also have been thinking about climate change for quite some time now as one of the most pressing issues of our time. When I was younger, I was involved in environmental activism to a very small degree, but after coming to the University and learning more about the ways climate change is a product of our imperialist and colonialist world, I feel really dedicated to dismantling the structures that are in place that perpetuate climate change.

Question: Do you have an inspiration to credit, a person, thing, etc., for your participation in the climate strikes? Or something or someone that inspired you to take action in the climate movement? Something in your daily life?

Rachel: I have always been very interested in taking care of the earth. For example, I used to celebrate Earth day, and I played with the neighbor kids by going to parks to clean up. I took a liberal arts science class where I learned about Rachel Carlson’s discovery of deet and how harmful it is to the earth. From there I became super passionate about it, and then added sustainability not only to my major, but to my life.

Donna: The people within my community are inspirational to me. I recently got politicized, maybe about two years now, that propelled me to be more active within community organizing spaces. I have met people who are friends of friends of organizers and people who are politically active, and the way that they show up for injustices and the way that they show up for justice really inspires me to collaborate with them and continue to work for a more just world. It’s even as simple as conversing with people in person; that’s inspiring. A week ago I went to a BIPOC happy hour, and we just sat down and started talking about our work with environmental justice. I also see things while scrolling through my Facebook feed.

Donna: When I go to direct actions, what really gets me going and pumped up is chanting, but there wasn’t a lot of chanting in the section of the march that I was walking. There was, at one point, where I caught up with the Democratic Socialists of America, and I think they were representing the eco-socialist branch, but I chanted with them “an-anti-anti-capi-talista”, it was one of my favorite moments at a protest being strictly anti-capitalist. Something that was inspiring to me was chanting with fellow members of the DSA. I had been to a handful of meetings so I knew the people marching. The most disheartening part (I didn’t feel as much of a charge compared to the first protest I ever went to which was protesting trump’s inauguration, but that was in Boston) was that there was electricity in the air that I didn’t really feel at the climate march, at least during the march, partially because of the lack of chanting.

Question: What are your thoughts on the turnout for the Saint Paul climate strike?

Rachel: A lot of young folks were there, which was nice, ages between 15 and 20- some kids were there with their parents. In regards to like diversity, it was nice to see some elements of diversity, like I said, most of the speakers were POC. But, we do live in a predominantly white state- there were more white people there, and that’s just a reality of where we live.

Donna: I expected there to be a lot of people there, but compared to other cities around the world there wasn’t that big of a turnout. I saw photos of other streets flooded by people, but it wasn’t like that in Saint Paul. It was a good turnout, but not as big as other cities. There were a lot of youth though, which makes sense though because it was started by Greta who started the Fridays for the Future. Some of the kids were chanting “we skipped a lesson to teach you a lesson!”

Question: Why do you believe that it is important to show solidarity with others for climate action?

Rachel: Because for so long these narratives and realities have been suppressed and come at the cost of other people’s success and development, and that is just inherently wrong. It’s a shame that it’s been going on so long and it is high time that we do this, and we need to take drastic steps towards environmental justice. It’s so easy to take a step back and say climate change isn’t affecting people in like Africa, but we are seeing people being displaced as a result of climate change, and it definitely does affect us and it is inherently wrong.

Donna:You know, I’m actually at the point where I am doing as much as I can to, not necessarily stop climate change, but at least lessen the effects of it. And it can be really isolating, and you know, one can easily fall into a place of despair and darkness when you’re by yourself and not communicating your grief about the world’s state. It can be difficult to express that when you’re by yourself, and when you’re with others there power to that, and it reinforces and reminds us that you’re not alone in this fight. And loneliness is one of the most paralyzing and worst human emotions. That’s why I think community and solidarity is important.

Question: What do you hope will come out of the worldwide climate strikes with the ongoing UN climate talks and the COP25 in Santiago, Chile in December?

Rachel: Well, I hope that nations who have previously not taken any, like, steps toward regulating their climate, I hope those states realize that the time is up and that there begins to be a global platform for climate collaboration. We need to provide different nations resources so they can help themselves, we shouldn’t just swoop in and fix it because it makes the inequities even wider. I just hope something changes, because we are out of time and we all know that, so I hope there are some serious moves towards change, like systems changes or institutional changes. Environmental standards and policies are going to be a huge influence on how I vote next Fall. Climate change does affect us, it’s not a red or blue or partisan issue, it affects everyone. That and collaboration are the two things I’m hoping for.

Donna: I’m not a huge policy buff, that’s something I would like to learn more about. So, in terms of where we are in terms of climate policy, I don’t know what to look for when it comes out of those summits. But I do support the Green New Deal, and I realize that we need to couple that climate policy with an approach that is centered around the people who will be experiencing the worst effects of climate change. In other words, we need to stand up for the Global South and in underdeveloped countries, and recognize that the Anthropocene is a Eurocentric concept that puts the fault of climate change on humanity in its entirety rather than recognizing that it’s a cause of Western ideals. I hope that we bring in and center the voice of those that are the most affected.

Question: What will you continue to do after the climate strikes to make your contribution to the climate movement?

Rachel: My long term goals are to get into the policy side of things, that’s what I’m most interested in and I think that that’s where the biggest change can happen. Short-term, how can we elevate voices that are being disproportionately affected by climate change, making sure that the narratives that are being pushed to the front are as diverse as possible. For example, Greta Thunberg is the face of this movement and is doing a fantastic job at it, but she is a white student from Sweden, so she comes from a very privileged place, so making sure that other narratives are also being told in the fight against climate change and what my role is in having this happen in my communities.

Donna: At this point in my life, I’m coming to the realization of how knowledge can be a tool of liberation. In order to have productive discourse on what we can do to mitigate climate change, and having discussions that address that, are people who are knowledgeable about the issues at hand and are able and willing to present that information to others in a way that motivates them to take action as well. And whether that means making small changes on an everyday basis, like individual choices to work towards reducing our impact on the earth or going into policy that makes those changes, I hope to be informed and knowledgeable enough to facilitate those discussions and propel them to take action. I’m also learning things that can make the greatest difference like plant based diets and the education of women. Learning and everyday choices are important.