Moving Forward, With or Without the UN 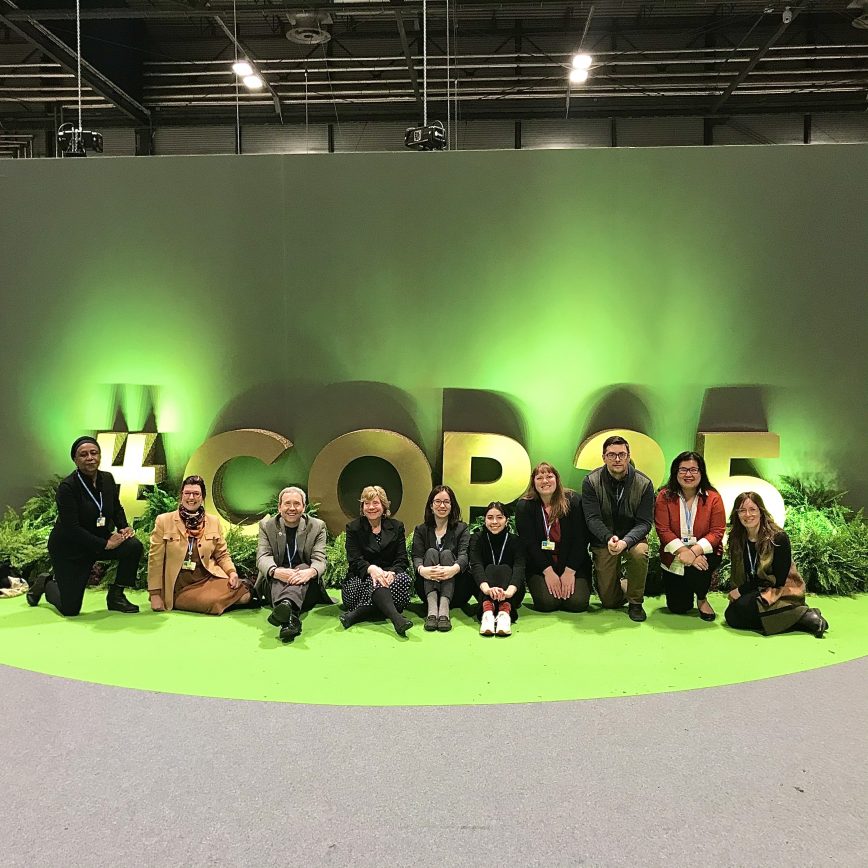 By Michelle Garvey, a faculty member teaching in Sustainability Studies and advisor to the Voices for Environmental Justice

What we knew going in:

Historically, the most monied and powerful governments control the outcomes of every UN COP, and this year would likely be no different.

However, given the extreme urgency of our climate emergency, one would think that if any year would interrupt that history, this would be that year. Every single government on this planet has been given an unprecedented mandate from their citizens to act swiftly; millions around the world have participated in protests, strikes, and marches, demanding action to forestall total catastrophe.

In light of this, Madrid could have provided an ambitious running start to the Paris Agreement’s 2020 deadline for implementation.

What we know now:

The COP25 ended in failure. No roadmap to limit global warming to 1.5 degrees Celsius above pre-industrial levels was achieved, thanks to the nations most frequently called out by the majority of world governments: China, European Union, India, Brazil, Japan, Australia, and—perhaps the worst offender—our own United States. By contrast, the rest of the world demanded ambitious climate action. But ambitious action requires a massive redistribution of wealth—and thus power—that nations like ours refuse to relinquish.

Our country is not only unwilling to embrace the benefits of a more equitable and clean planet; they are willing to expand and expedite climate catastrophe. A brief summary of the five agenda items I followed illustrates how:

The contrast is stark between a struggle for representation at the UN, and a demand for revolution at every adjacent People’s Summit since the Copenhagen COP15.  The people demand “System Change, Not Climate Change.”

Particularly egregious in debates around implementing a carbon market was that human rights actually became a sticking point. Apparently the highest-emitting countries removed human rights language from Article 6, taking us yet another decisive step backward from democratic responses to climate emergency.

The UNFCCC Women and Gender Constituency joined The Women’s Environment and Development Organization in applauding this advancement of the original GAP, but warns, “The GAP is a tool to advance progress on both gender equality and effective climate solutions, but gender equality does not live in the GAP. It is realized through just and bold climate action. We remain appalled by the lack of progress overall in these negotiations,” Bridget Burns, of U.S. WEDO.

By the middle of week two, delegates learned that the U.S. bullied other nations in Article 8 negotiations, protecting the fossil fuel industry at every turn. Without climate reparations for the Global South, we have no hope of achieving a 1.5-degree goal; many of the countries hardest-hit by climate catastrophe can neither achieve, nor increase, their NDCs without this financing.

Moving forward, with or without the UN:

At one UN side event led by the En-ROADS climate simulator research team, audience members were asked to suggest ways to confront climate change, with the goal of keeping global temperature rise within 1.5 degrees Celsius (try it yourself here!). The researchers then computed the effects of each solution, as the audience witnessed the extent to which the temperature fell.

What became clear was that 1.5 degrees is possible. This echoes similar assertions by climate experts around the globe; with very few exceptions, we have the technologies and the knowledge to surmount every sustainability and social justice challenge we face.

Making it to 1.5 degrees will take systems change in every sector of society. Retrofitting buildings, eliminating fossil fuels, shifting agriculture away from monocropping and CAFOs, expanding accessible and clean transportation, preserving oceans and forests while restoring more carbon sinks…each has a major role to play.  What struck me, however, is that so very many solutions exist, in many creative combinations of kinds and degree.

We cannot count on the UN to achieve climate justice, to ensure a healthy future for our children.  But we can—we must—forge ahead, at the municipal, state, county, province, and sometimes national levels, to carve a future for those cultures, ecologies, and species not already lost to climate catastrophe.

These are pathways not only through our loss and grief, but toward opportunity: as we implement ways to mitigate the worst of climate emergency, we simultaneously win the co-benefits of power redistribution. Clean air and water, not just for the elite, but for everyone. Leadership that reflects our wonderfully diverse peoples. Safety nets when disasters strike. Mobility without the need to own a car. Localized, more resilient food systems. Humanely treated animals. Natures that makes us feel healthy, not sick. Jobs that pay living wages. Renewable and emissions-free energy.

Climate justice advocates, what co-benefits are you eager to embrace…with or without UN support?

Big Talk for the Bare Minimum
Who gets to speak, to tell the story?: Reflections on COP25 Madrid, Spain