On Hope and Fear, and Serendipity, at COP26 by Beth Mercer-Taylor 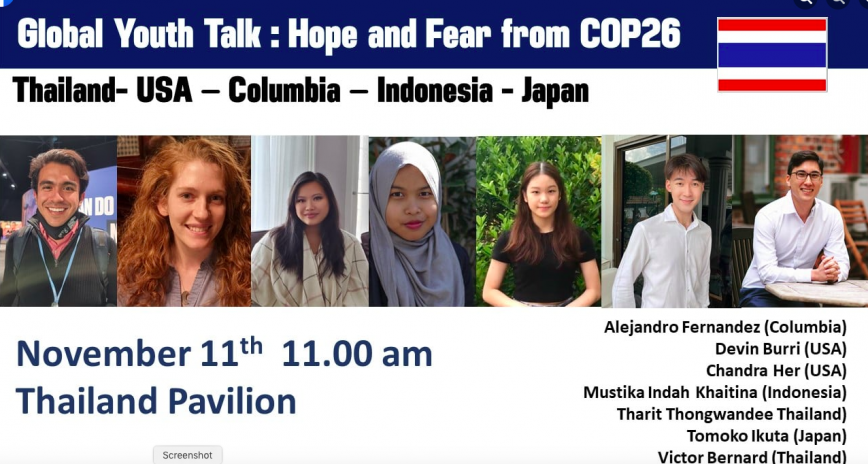 In my second week at Cop26 in Glasgow, I stayed in Edinborough, like most of the 11 students on our University delegation and alongside thousands of other delegates and media attending the global climate negotiations. At the Code Court Hostel, I slept in a former-jail cell “pod” in the historic court building, and arrived for my first breakfast hoping for coffee and fruit. There was a long wait and no fruit, except for tangerines in the backpack of my tablemate, Kotch Voraakohm. She turned out to be an exceedingly kind and friendly person. Voraakohm, a Bangkok-based landscape architect and winner of the United Nations Climate Action Award for work on Nature-Based Solutions to Increase Urban Adaptability | Thailand, offered me a ride to Glasgow with Thai party-member colleagues. A “party member” is an official representative of their country, so my hour-long ride was a great chance to learn how another country sees our global progress on climate change. I learned that Thai science leaders are interested in STEM education exchanges and are very aware of Minnesota’s leadership in biomedical research and device manufacturing. During this ride, we agreed it would be great to introduce Minnesota and Thai students to one another, and Voraakhohm offered to arrange a panel at the Thailand Pavilion inside the COP26 venue. I had no idea that this could happen in the course of two days- but with teamwork we pulled it off!

If you’ve read anything about COP26, you know that young people around the world are calling climate change an emergency and are loudly voicing their hopes and fears for the world. Our University of Minnesota students were very much aligned with the views expressed by youth speaking at official panels, side events and at protest activities outside the official COP26 venue. Across these different events, young people asked the world’s leaders to take faster action on climate change and to secure financing for emissions reductions, especially in the developing world. They also asked for more funding for adaptation projects to help those already suffering from climate change, which in the language of the UN, is called “loss and damages.” While most of the youth attending COP26 were officially serving as “observers,” they were acting as the conscience of the conference.

Three University of Minnesota graduate students, two from the U.S. and one from Colombia,  participated in an official youth panel at the Thailand Pavilion, where they joined fellow youth panelists from Thailand, Indonesia and Japan. They expressed their shared hopes that people and communities will take action on climate change, and their shared fears that calls for climate justice by indigenous people, youth and developing country leaders are being ignored. The UMN students were Alejandro Fernandez of the College of Science and Engineering and Devin Burri and Chandar Her of the Humphrey School. The panel drew 10 Minnesota delegates, including a couple of people watching online, and of course the best part was the dinner before the event and the small-talk after it ended, with trading contact information and making plans to stay in touch. As we head into Minnesota winter, we will think of a beautiful Thai urban rooftop garden serving as a nature-based solution to water and energy challenges, and of the climate innovator who made that project come to life, and who wants all of us to be inspired to act on climate.