What COP27 tells us about connecting climate ambition to climate action 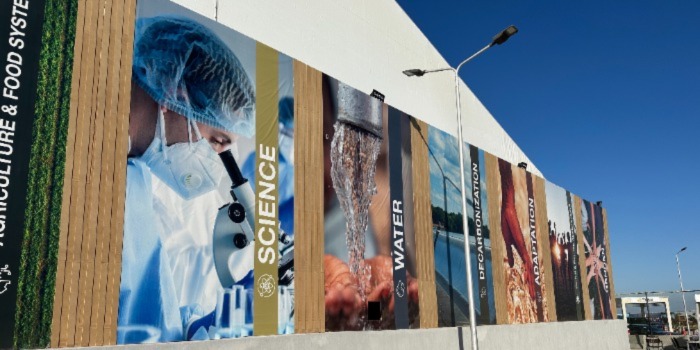 The 27th UNFCCC Conference of the Parties: COP27. 40,000 people gathered in one spot with a global, far-reaching agenda and a ticking clock each year. Corporations and NGOs and youth advocates and students and researchers – and even a few negotiators. All with the unenviable task of creating climate action against the backdrop of powerful, entrenched interests, a war in Europe, political division in one of the world’s largest greenhouse gas emitters (the US), and a growing autocracy in another (China).

But we know that the world is paying attention to the existential threat of climate change and COP27. The New York Times, the Guardian, and Al Jazeera  have all made COP27 a top story in November.

At the meeting itself, there’s an undeniable sense that abating climate change is actually achievable – that despite repeatedly falling behind in our shared ambition, it’s still possible to achieve the goals of the original UNFCCC charter and the Paris Agreement: holding the global average temperature increase to 2 degrees above historic baseline, if not 1.5. It’s not blind hope because rapid transitions do in fact happen. And without the hope of possibility and commitment to keep striving, what do we have at all?

For “observers” (everyone other than negotiators and the press), the main reason to attend COP27 is to be part of this global conversation and shared ambition. There are hundreds of panels and presentations at country pavilions, corporate-sponsored side events, and civil society venues. These presentations are extremely high-level; they are much more about rhetoric than substance. It’s not a place to learn the latest science or hear particulars about what climate actions are actually happening. Instead, the key is to listen for what is being talked about and how folks are talking about it, as well as the variation in that conversation among countries and constituencies. And to join in that conversation with your own expertise or agenda.

It’s the blend of my own interests and the new things I learn from being in the mix of the moment that makes being at the COP so valuable.

The gap between action and commitment

Because the science and impacts of climate change is so clear, countless countries and corporations have set emission reduction goals. Yet, greenhouse gas emissions continue to rise, revealing a substantial gap between commitment and meaningful action – or at least kicking the can.

What’s causing this gap? Sustainability goals that live so far out in the future that it’s easy to delay action today, thinking there’s still time to take action later. And goals for which a current president, prime minister, or CEO won’t be around to be held accountable when the deadline arrives.  We also lack incentives for longer-term thinking and robust, reliable, and independent measures and methods of accountability. Most current accounting and reporting methods are self-reported and based on process, not outcome. But new research can change that; in fact, it’s already starting to.

A case in point is methane. Methane is a powerful greenhouse gas with known sources. Approximately one-quarter of anthropogenic methane emissions comes from the oil and gas sector where technology exists to stop the leakage. But we lack verifiable measurement to generate accountability.

That accountability is now coming online through public and private satellites, together with smart analytics, resampling of satellite data, and packaging atmospheric data with other information. These data make it possible to know how much methane is entering the atmosphere, where it is coming from, and who is responsible for that source. Researchers at universities, governments, and several start-ups, including a spin-off from the Institute on the Environment called Geofinancial Analytics, collect, collate, and distribute this information. New detection and accounting tools are critical to bringing greater attention and action to methane – and other greenhouse gases in other sectors, too.

The connectivity of nature and climate

In some respects, climate change has become so prominent on the international stage that it outshines other critical issues, but no issue that affects people and the environment operates in isolation. Thanks to the confluence of COP27 under the UNFCCC (climate, Nov. 6-18) and COP15 of the UNCBD (biodiversity, Dec. 7-19) it’s more likely than ever that nature and climate, and their relationship to human well-being, will interact on the global stage. Climate change ranks among the top three threats to biodiversity globally (some argue it’s the top threat) and nature solutions offer some of the most cost-effective techniques for greenhouse gas abatement and enhancing climate resilience.

Increasingly, NGOs, scientists, and government leaders are advancing the idea of “nature positive,” that addressing climate change is essential to limit biodiversity loss and offers unprecedented opportunity and reason for ecosystem restoration and expansion. We need new science to achieve this potential, from reducing uncertainty about the capacity for carbon uptake and storage in soils, grasslands, and forests to testing viable techniques for helping ecosystems adapt to a changing climate. Fortunately, IonE is doing that scientific work through Impact Goal grants on interdisciplinary soil health and sequestration project teams and leading a Climate Adaptation Science Center.

The primary power of the UNFCCC (now that the era of compulsory emission reduction of the Kyoto Protocol is over) is its global goal-setting. It establishes a shared commitment to specific emission reduction targets and mechanisms and financing platforms to achieve them. In 2001, the UNFCCC established an adaptation fund to build global adaptation capacity. At COP27, the global community is exploring the possibility of setting adaptation goals. These goals would need to be specific, equitable, and traceable with regular national reports to the UNFCCC, like occurs for mitigation today.

But setting adaptation goals is really difficult. Adaptation does not have the comparatively easy units of tonnes of carbon (or CO2-equivalents). Unlike greenhouse gases, adaptation does not circulate globally, and almost all adaptation happens locally. Yet, common frameworks for adaptation tactics and priorities are possible, and measurable outcomes of lives and ecosystems protected may be possible.

Here again, science is critical to the UN ambition. Researchers provide robust empirical standards for adaptation evaluation (e.g., emerging from the field of monitoring and evaluation), and academia is a key place for innovation in adaptation techniques. For example,  managed relocation or assisted migration – a concept that first emerged in the ecological literature – is now actively considered part of the ecosystem-based adaptation tool box. I’ll certainly be watching the UNFCCC for its evolving global understanding of adaptation, and I’ll be fascinated to see what goal-setting for adaptation gets settled at COP27, if any.

Of course, it’s my job to help represent science and education in the climate change ecosystem, and make sure that the University of Minnesota is active and recognized for its leadership and commitment to sustainability, climate action, and justice. I come home with gratitude for that opportunity and responsibility.

The duty of all COP observers is to share – share what we’ve seen and what we think, to bring further attention and context to the UNFCCC process and the parties that enliven it. To strive in our way to bring about change and protect the things that make life on earth possible for humans and enable a future where people and planet prosper together.