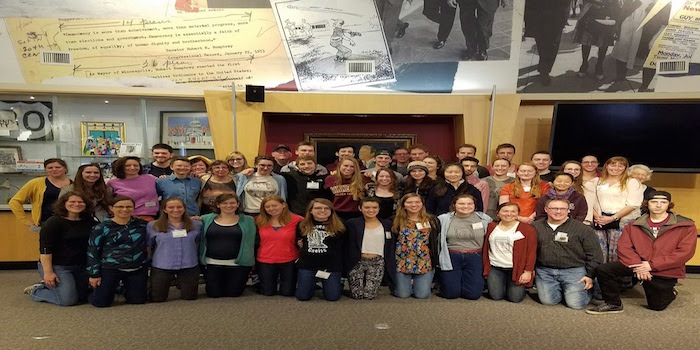 The Twin-Cities campus hosted the 6th annual SELF-Sustain conference that provided a collaborative, and engaging atmosphere for students from all five University of Minnesota campuses (Twin-Cities, Morris, Duluth, Rochester, and Crookston) to converse in. The event kicked off with many students participating in the Sustainability and Energy Expo followed by a circle talk with Francis Bettelyoun, involved with the Native American Medicine Gardens, who offered a Lakota perspective on our nation’s methods of dealing with climate change.

After a two hour break, the students met back up at the Gopher Spot for a fun-filled night of bowling. This was a great opportunity for the students to get to know each other better as well as converse and reflect on the day’s activities before the following day’s activities!

on campus. First up was the Cornercopia Student Organic Farm, a student-driven, certified organic farm on the Experiment Station of the St. Paul Campus. This farm, which is a little over five acres, produces hundreds of varieties of fruits and vegetables and market them here on the Twin Cities campus each season. On the tour the students were able to get an inside look of the greenhouses, which were growing a large variety of produce such as sprouts, fennel, and sweet potatoes.

The second tour took place at the West Bank Community Garden, located between the Carlson School of Management, Wilson Library and Rarig Center. At this tour, Kristen Anderson, one of the students who put this project into motion, recited the history of how the garden came to be. The story she told was incredibly informative and enlightening about how to start a project or group on campus and continue to grow and improve it. The garden’s project design and implementation were led by a core group of students to create a space where faculty, community members, and students would be able to collectively design, implement and grow gardens for education and experimentation centered on healthy food and the environment.

Although the plants hadn’t started growing yet, touring the garden and hearing Kristen’s story had a lasting impact on the students. Ally Glasford, a freshman from the Twin Cities campus, commented on her experience, “I had no idea there was a garden on West Bank that was started by students. I’m really glad we toured here because it gave me a lot of insight on how to start projects on campus and the different successes and failures I might encounter.”

The adventure continued with an “Uncomfortable Lunch”, which included delicious locally sourced food and a discussion on food insecurity and the campus initiatives to combat this issue. This was followed by an hour long student-led round table discussion on a variety of topics, such as divestment, art and sustainability, renewable energy, and community engagement. Katie Ledermann, a student from University of Minnesota Morris who is an essential contributor to planning the SELF Sustian event itself, stated, “Getting to hear about what everyone was working on across the campuses throughout the two day event and being able to see examples of the good things happening at the Twin Cities campus felt like a big success.”

Two alumni speakers, Dominique Boczek, a UMN Alumni and Sustainability Education student worker, and Andy Pearson from MN350, told their story of life after graduating with a sustainability minor, which was insightful for the many soon-to-be graduates. SELF-Sustain concluded with one final group picture and the big announcement of who’s hosting the event next year—Duluth!