Kicking Off the Undergraduate Leaders Program 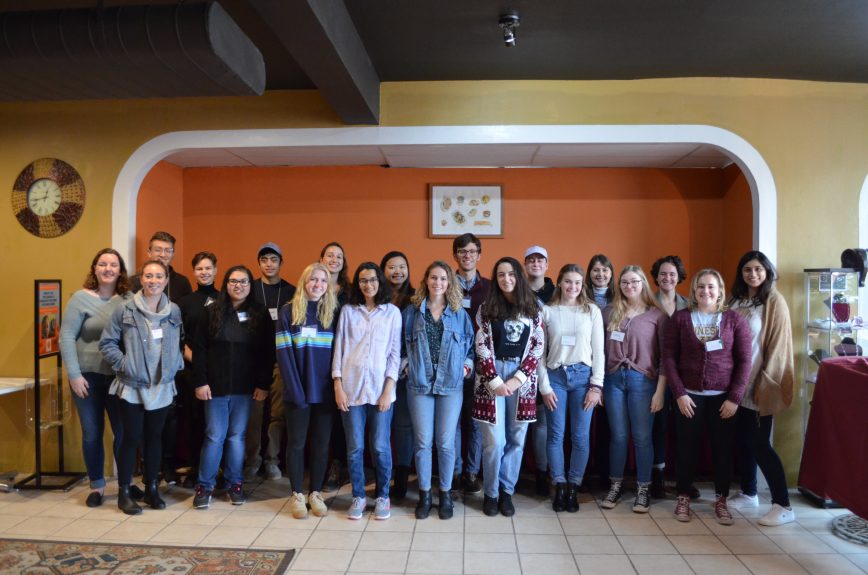 On October 12th at Gandhi Mahal, a fine Indian cuisine restaurant in Minneapolis, the new cohort of the Undergraduate Leaders Program kicked off an exciting year of leadership and community building. For the first meeting, the leaders were focused on making connections with each other, sharing their leadership stories, bonding over a meal and diverse perspectives, and beginning the initial stages of their sustainable projects and practices.

Sai Powar, an alumna of the Undergraduate Leaders Program and of the University of Minnesota, spoke about her experience in integrating sustainability principles into her education and her daily life.

Sai signed up for SUST4096 Sustainability Internship the first semester that it was available. After reading the Principles of Environmental Justice for the course, Sai realized “This is me! This is what I want to do!” She felt she had finally found herself represented outside of the stereotypes associated with sustainability. Sai found that these principles could be applied to her life, reminiscing on how in her home country of India, despite coming from a relatively affluent family, droughts limit water access to two hours a day. “This isn’t normal, this is not okay,” Sai said during her speech. The lack of available environmental justice courses made it difficult for her to explore her new passion. So, Sai partnered with the Minnesota Student Association on passing a resolution for environmental justice education, saying “Why doesn’t someone in Carlson or CSE have to learn about environmental justice? Because they are going to be making decisions about business and technology that will affect everyone.”  Sai went on to discuss her current job in medical technology research, her future hopes for grad school, and her dreams of one day running a non-profit in India working on climate change education.

After Sai’s speech, the leaders bonded over a sustainably sourced meal provided by Gandhi Mahal . Not only did students get to enjoy great Indian cuisine, they also got to see exactly where the food on their plate was coming from by touring the restaurant’s aquaponics system. The owner, Ruhel, works tirelessly to ensure that his restaurant sources food locally if he cannot grow it himself in the aquaponics system. The undergraduate leaders spoke with Ruhel and one of the local urban organic farmers that helps him with the system. “In Bangladesh, we grow our own food, enough to feed ourselves and a couple of other people,” Ruhel said, “So, why would I change that here? Why wouldn’t I grow my own food?”

Not wasting a second after seeing sustainability in action, the leaders immediately jumped into discussing future steps for their projects and practices. The leaders’ topics ranged from textile recycling to sustainable urban design. However, the diversity of projects did not keep them from coming together on common issues. For example, the leaders had to think critically about the scale of their project, the community they wanted to impact, and the ecological, equity, economic, and wellness issues that their project would be addressing. By coming together with different perspectives on the environmental issues they are passionate about, the new Undergraduate Leaders Program cohort truly embodies how diversity and intersectionality can play an important role in sustainability.

The meeting ended with short or one word summaries by cohort members, shown below.