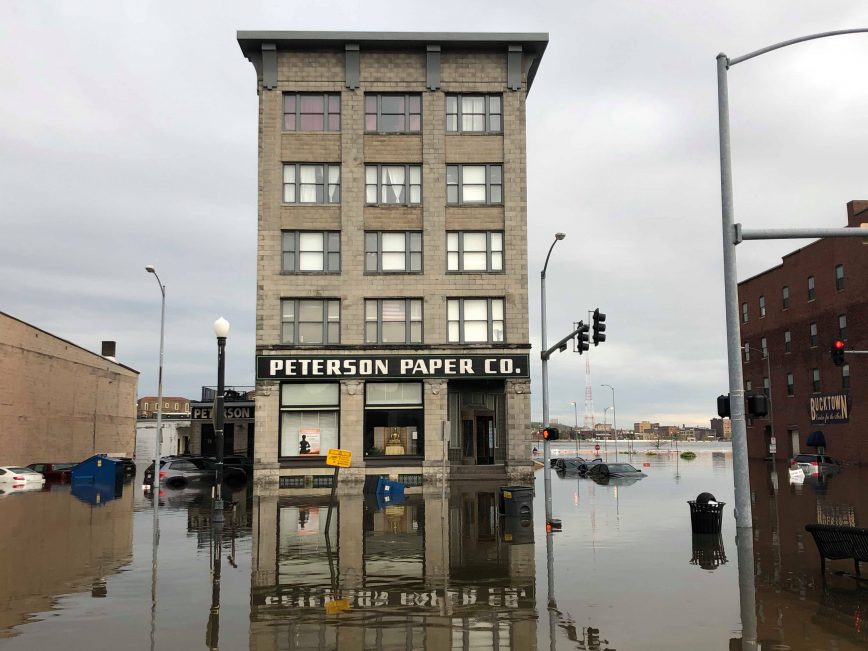 Lilli Ambort is a UMN junior studying Global Studies with a minor in Asian and Middle Eastern Studies. She started working for Sustainability Education in Fall of 2019. In the Summer of 2019, her hometown Davenport, Iowa was engulfed by one of the worst floods the small city had seen in 20+ years.

All pictures were taken by Darcey Friske.

We hear about typhoons in the Philippines, thick smog in China, and wildfires in California, but how do these things relate to climate change and to us? The disconnect in the media between environmental catastrophes and climate change makes it difficult for us to understand how climate change is impacting the world around us. Telling our own climate change stories can transform climate change from a vague and distant issue to an urgent and pressing challenge that holds the safety of our home’s future in its grasp. One UMN student shares her story:

Growing up, I never paid much attention to the annual Spring flooding that took over the riverfront areas of Davenport- the HESCO barriers kept the furiously strong currents of the Mississippi river far away. Davenport is one of the four cities that make up the Quad Cities, which spans across the Iowa-Illinois border, bridging the divide created by the Mississippi river with two bridges (pun intended). When I was little, driving over the bridge was fun during flooding season because the baseball stadium looked like a reverse fish bowl, with the river water knocking at the door of the stadium but never letting it inside.

In early May of 2019, I was wrapping up the last of my final papers when I decided to hop on Facebook and take a mental break. When I started scrolling, every post was about the same thing: a HESCO barrier had broken, and the flood had arrived in downtown Davenport. While my family was safely inside our home in the suburbs of Davenport, residents of the downtown area were being evacuated as flood water seeped into businesses, homes, and apartment buildings. My former co-workers at a local restaurant were out of a job for nearly two weeks.

What I didn’t see in the coverage of the flood was a discussion of how the flooding exacerbated existing inequities. Those that were out of a job were mostly waitstaff and bartenders, who are already paid below minimum wage. The downtown area is relatively gentrified, but there is still a high concentration of poor people of color who may not have had the option to find a different apartment for two or three months or who may not be able to purchase new household items in the interim between the damage and the disbursement of flood insurance. This made me question, how many voices aren’t being heard in the aftermath of environmental catastrophes?

With climate change, flooding in my hometown has become worse. The flood waters reach higher peak levels every year, and I’ve started to wonder if my hometown will be on the news in 50-100 years – another city fallen victim to climate change. How many other communities are experiencing the same thing? Telling our climate change stories makes the struggles of other communities visible and creates greater understanding of how we are all in the fight for climate action. Together, we can make the invisible visible and actionable in the fight for planetary health.

Are you interested in telling your climate change story? Go to z.umn.edu/climatechangestories and fill in your information. A member of the Sustainability Education team will contact you for an interview!

U of M Student at a National Sustainability Conference: Unpacking What I Learned
Climate change solutions: Convening academics and advocates

One thought on “My Climate Change Story: Davenport, Iowa”