Energy and Environmental Cost of Dairy and Non-Dairy Alternatives 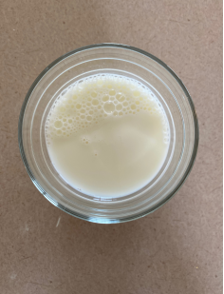 There has been growing concern about the sustainability, ethical choices, and health benefits associated with dairy milk. Many people, including children, have avoided milk due to an allergy to a protein found in dairy, lactose. In some countries, people have fallen ill by consuming raw milk that has been contaminated with Escherichia coli or Salmonella spp.  In addition to health concerns, undercover footage surfacing of the treatment of animals at Fair Oaks Farm sparked discussion about the ethical treatment of cows as the video showed workers abusing cows, separating calves from their mothers, and cows being kept in close captivity with little to no space to graze. While there may be concerns about the consumption of dairy, there are many necessary vitamins and minerals found in dairy such as calcium, vitamin D, protein, vitamin A, as well as probiotics in cultured dairy.

However, there are numerous non-dairy alternatives commonly derived from plants that allow people to replace milk with, such as soy milk, almond milk, coconut milk, oatmilk, and many more options. While these options may be ethically derived and sustainable, nutrition and vitamins present in dairy may be absent, as well as the possibility of allergies to these plants. But how do dairy alternatives further compare to dairy produced by Holstein cows?

In order to care for cows, farmers must utilize water and fertilizer to grow crops that may be consumed by the cows. This affects the environment as 64% of suspended sediment is due to agricultural land and excessive nitrogen and phosphorus in waterways due to fertilizer runoff accelerates eutrophication. However, manure produced by the cows may in turn be used as  fertilizer for crops. In addition the 318 g/day of methane produced by these cows is a concern as there is currently an increased awareness surrounding greenhouse gas emissions. These methane emissions produced by large, commercial farms may impact air quality as well as nearby plants and animals due to increasing concentrations of NH3, N2O, and CH4. Unlike small family farms, commercial farms often utilize machines in most steps of production such as collecting milk from their many cows, separation of raw milk, fortification, pasteurization and bottling, using machines for all of these steps requires a significant amount of energy.

While soy milk may not have ethical concerns associated with its production, many people may have a soy allergy, preventing the use of this dairy alternative. Soy milk has reduced cholesterol and is rich in protein as each bean contains 35-45% protein. To produce soy milk a farmer must grow soybeans, which has a water footprint of 181 liters of water for a liter of soymilk. Similar to fertilizers used to produce cow feed, fertilizers used to grow soybeans may runoff into waterways and contaminate drinking water, widespread usage of fertilizer may release nitrous oxide into the atmosphere as well.  Producing soy milk has a very large water footprint as the soybeans must be ground and dissolved in water. However the water footprint may be decreased 98% with organic production of soybeans by minimized soil evaporation. While soybeans have a large water footprint, less water is used in the production of soymilk than dairy. A large amount of energy must be used to produce one liter of soy milk as enzymes in the beans must be deactivated, the beans must be ground and dissolved in water, the product must be centrifuged and mixed with flavoring all before sterilization and homogenization.

Almond milk production is quite ethical but may cause some health concerns as nut allergies are a prevalent allergy. A thickening agent and stabilizer used by some in the production of almond milk, carrageenan, has been linked to digestive issues. However almond milk contributes to a balanced diet in a low caloric manner due to protein, fiber, vitamin E, and manganese. Similar to soy milk, almond milk production requires an abundance of water to grow almond trees and produce milk from almond powder as 15 gallons of water are required to grow just 16 almonds. Almonds are often grown in California, a state quite familiar with droughts, in order to water almond trees, water must be diverted which may cause land to sink due to a depletion of groundwater. In California 23,000 acres of land that has been previously used for low water crops have been converted into almond farms, requiring water irrigation to divert extensively. In addition to land sinking due to diverting water to almond farms, ecosystems may be left in drought which will affect the growth of flowers, inhibiting the ability of bees to reproduce due to the limited amount of flowers to pollinate.

While all of these options have positive and negative components, it is important to acknowledge the ecological effects of agriculture as it may affect biodiversity. The use of water for agriculture may cause animals to travel further distances to reach drinking water. Clearing land for farming may affect habitats of plants and animals. Gas used by tractors for farming also has significant impacts on the quality of air. It is important for consumers to consider all aspects and steps involved in the production of a product that they consume in order for consumers to make educated choices. Buying small and supporting local farmers may be a great option for some as well as promoting better utilization of land to increase crop yield and decrease water footprints.

Solar Window
There is Energy in Your Recycling