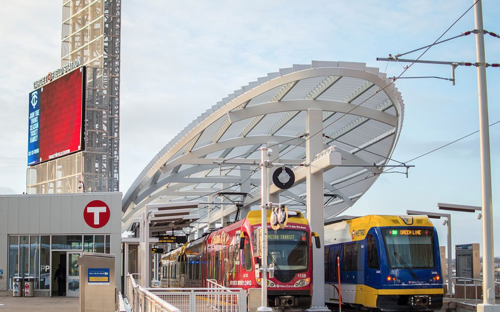 As college students at the University of Minnesota, many of us may use the Light Rail at least once a week, if not daily, to get to our destination on campus or off campus. The light rail was first instituted in 2004 with major expansions occurring from 2008-2014 for a total of 37 stations in the Twin Cities. On average, it is estimated by AAA that “it costs more than $9,000 per year to operate and maintain a standard-sized car for a year” (Smart-trip.org 2020). Not only would this give more money to individuals, but it would also create less reliance on the consumption of fuel for cars as it was recorded that the Light Rail gives nearly 23 million rides a year (minneapolis.org 2019). With this many rides given to people, where it is predicted that over 60% of the riders of the Light Rail actually do own a vehicle, it would greatly decrease the use of automobiles, which means less air pollution would occur and in turn contribute to the slow of climate change. The success of the Light Rail has been not only economically but also environmentally, with plans to add 27 new light rail stations ranging from St. Louis park to Eden Prairie by the year 2024 (metrocouncil.rog 2019). This increase in Light Rail stations would not only increase the number of users of the light rail which in turn decreases the number of cars in use and fuel emissions. I would explore the idea of more Light Rail stations as a system connecting the Twin Cities to areas such as Duluth and Rochester. I believe this would be an interesting topic to cover as there are many in the state of Minnesota who travel to Duluth regularly and having a light rail/train system to connect the Twin Cities would not only be cost effective for individuals, but also would aid in the decrease in carbon emissions. It could also be possible to have more people work up in Duluth from the Twin Cities if the Train/Light rail was fast enough (such as the ones they have in Japan). I think this would be very interesting, especially in the state of Minnesota, as we don’t have such a system in place, though there are many who utilize the Light Rail within the Twin Cities. So, expanding not only the Twin Cities system, but also connecting to other cities would hopefully have a positive effect, not only economically, but also in decreasing carbon emissions. It could also be viewed as a way to increase job opportunities and economic growth.