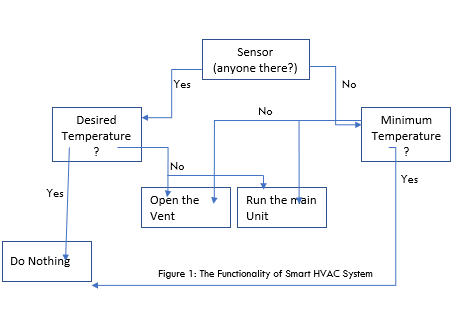 Have you ever noticed how quickly smart devices are getting popular these days?  Many people get really excited when it comes to making their home smart. Stores are full of smart devices from tiny ones such as smart speakers and smart light bulbs, to the bigger stuff such as smart fridges and smart blinds. While many of these devices could be unnecessary to have, there is a need for some other smart devices that either don’t exist or are only available in a limited amount; smart HVAC systems are one of them. Of course, there are smart thermostats and smart vents in the market, but they are different from what you are going to read here. In this article, the idea of having a fully smart HVAC system will be considered as well as its advantages and disadvantages.

What most of us have in our homes are a central single unit HVAC system with one (or sometimes more) thermostat. The way the traditional system (I call it that because they probably should’ve been replaced long ago) works is that the thermostat is located somewhere in the house, it reads the temperature and if it’s not reading the desired temp, it either turns the heat or A/C on. Now let’s ask this question: what if I’m in room A (main floor), and I don’t need heat in room B in the basement? Is my HVAC system smart enough to figure this out? No, it’s not. It’s either on or off. Either cold or hot. Now let’s talk a little more about a better system.

A smart HVAC is a smart system (not a single unit). It adjusts the temperature of each part of the house based on the demand, therefore, an empty workshop downstairs won’t be heated all the time for no reason (or at least the temperature won’t be as cold/hot as the living room upstairs). In other words, each part of the house will have its own specific temperature. With this system, the consumer will not notice any change in his/her home’s temperature, however, they will notice a little change in their utility bill. Now, let’s dig a little deeper to see how this system actually works.

The system consists of a smart HVAC unit, smart vents, smart thermostats, and sensors. There is one sensor, one thermostat, and one smart vent in each room. All the vents, sensors, and thermostats talk to each other and to the main unit. Sensors detect the presence of people (or pets) in a room. Thermostats read the temperature of each room and send it to both the main unit and the consumers’ smart device. The vents can be closed or open based on the demand. If a person is in a specific room (let’s say room A), the sensor will sense his/her presence. It will then talk to the associated thermostat to make sure that the temperature is set to the desired temp. If the occupied room is colder/warmer than what it’s supposed to be, the thermostat sends a command to the main unit to turn on the heat or A/C. Also, the smart vent associated with room A will be open all the way to let the warm/cool air enter the room. Meanwhile, let’s say that there’s no one in the basement. Since the sensors in the basement haven’t recognized any movements for a while, they send a command to all the vents in the basement to shut off; they will also send a command to the main unit to adjust its power to only one vent (the one located in room A). Now, what if the person moves from room A to room B (in basement)? Is he/she going to notice a big temperature difference? No. The thermostat and smart vents make sure that the temperature of different parts of the house doesn’t fall below or go above a certain temperature; this could be adjusted by the consumer. For example, I can set the minimum temperature to 60°F and my desired temperature to 68°F; the system will keep the room that I’m in at 68°F while it doesn’t let the temperature of other rooms to drop below 60°F. Another good feature of the unit would be learning ability. This system will learn from a person’s presence and adjust itself accordingly. The system will know when the consumer leaves the house and by what time she/he comes back; also, it can predict at what time (roughly) the consumer enters or leaves a certain room. It’s worthwhile to mention that the sensors are activated all the time; therefore, if for any reason, the person’s schedule changes, the system won’t be surprised. It can also track the location of the consumer, and adjust the temperature based on that.

Another cool feature of this system is the ability to detect air leakage in a certain room. Utilizing the thermostats in each room, the device can quickly notice where the temperature changes too quickly. For example, if rooms A and B are heated to the same temperature, and now the heat is off, each thermostat will keep monitoring the temperature change over a period of time. If it takes 15 minutes for room B to drop the temperature by 1°F, but it takes 5 minutes for room A for the same temperature drop, the device will notice air leakage in room A, and will notify the consumer. This will definitely save energy from getting wasted.

For better illustration, the image at the top of the article illustrates how the system works, and the figure below shows associated temperature for each part of the house based on people’s presence.

Now, this question might come up- how much would it cost to actually have one of these fancy systems in a house? Also, how much would a consumer save by switching his/her outdated unit to a fully smart one?

Let’s answer the second question, first. According to the U.S. Department of Energy, “You can save as much as 10% a year on heating and cooling by simply turning your thermostat back 7°-10°F for 8 hours a day from its normal setting. The percentage of savings from setback is greater for buildings in milder climates than for those in more severe climates.” With smart HVAC technology, you can lower the temperature of most parts of your house by 10°F without even noticing it. So, when you are watching your favorite show in your warm, cozy living room, the empty workshop downstairs is 10°F colder (and nobody really cares!). Also keep in mind that during the day (when you are out for work), the system will reduce the temperature by 10°F as well. Therefore, by doing some quick math, for an average $50 utility bill, over $10 a month will be saved (8 hours when you are away (the entire home) + 16 hours (only empty rooms)).

Now, let’s get back to the first question. First of all, there’s no right answer to this question, and it all depends on the number of rooms, the square footage of the house, the number of vents and so forth. However, to have a rough estimate, for a 1600 square foot house with 3 bedrooms, consumers will need around 5 thermostats and 5 smart vents. The price of a smart thermostat is around $100 dollars more than a regular thermostat, and the price of a smart vent is also around $100 dollars more than a regular one. The main unit, however, should be around the same price; therefore, for the house mentioned above, the total extra cost would be around $1000.

Notice that the consumer will save an average of $10 on every bill, so in less than 9 years, the extra cost would be paid off. Besides, the consumer will take advantage of the other features of the systems which are summarized below.

At the end, it’s worthwhile to re-mention that it’s time to move on! We all have had these old, outdated units for too many years, and it’s time to get them replaced. Many readers might argue on the high price of the system and mention that $10 saving a month is not worth it to pay an extra $1000 upfront; but, first of all, it adds up, and secondly, it’s not all about the money, it’s more about how wisely we use the energy and prevent it from being wasted.

Utility Municipalization: Empowered by the People, For the People
Our Future Energy Portfolio