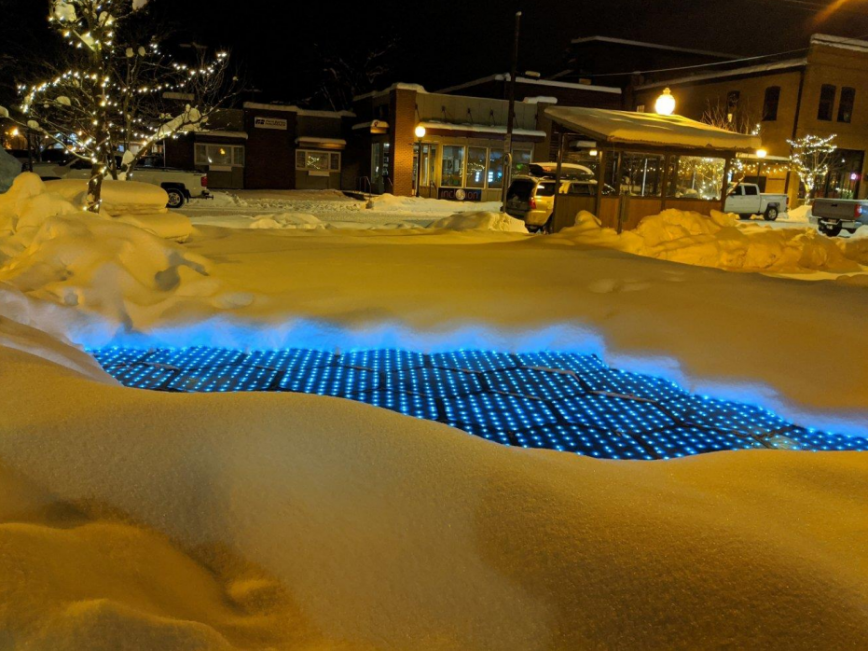 The Twin Cities averages around 50 inches of snowfall every year. As a result, we spend on average 100 days per year sanding, salting, plowing, and slipping on snow and ice every year. This process generates significant amounts of environmental and property damage. It also requires a large budget to store the salt, maintain the plows, and employ the drivers. A city in Michigan found a way to solve these problems by heating their downtown roadways and sidewalks.

The City of Minneapolis has the task every winter to remove roughly 1,500 miles of snow and ice every year. This requires the city to have an annual budget of $13 million for snow and ice removal. They operate up to 100 carbon-emitting plows at a time, dumping thousands of pounds of salt on the road. While the salt melts the ice from the roads, up to 70% of that ends up in ditches that get absorbed in our lakes and rivers. We can more efficiently remove snow and ice by simply heating the surfaces we walk and drive on. Here are a few examples that currently use this technology.

Holland, Michigan has operated a water-heated snowmelt system since 1988, heating approximately 500,000 square feet of driving and walking surfaces downtown. This system has an annual operating cost of $20,000 – $80,000 with an overall $8 million investment. It utilizes heated water, pumped through tubing laid into the concrete. It can melt an inch of snow per hour at 20 degrees Fahrenheit. This is also very similar to Nordic countries, but they use their plentiful geothermal energy for heating. Geothermal is not as easily accessible everywhere so electricity is the next best option.

Electrified concrete was pioneered by Chris Tuan, from the University of Nebraska, Lincoln. This concrete material is specifically designed to conduct electricity using just 48 volts. The conductive concrete material costs a little more than twice the price of normal concrete but only requires about 2 cents per square foot to operate. Airports have been testing similar materials in search of a solution to keep their runways clear. Whether it’s tubes laid in concrete or electrified concrete, we are still driving on the same material we are used to. Imagine driving at night over road markings that are illuminated by LEDs while it melts snow on contact. A small startup in Sandpoint, Idaho is trying to make this a reality.

The solar roadways project is trying to provide a more robust solution to heating roads by using hardened solar panels as sidewalks and road surfaces. They integrate LEDs, heating elements and solar heating to provide a unique walking or driving experience. It would replace concrete and asphalt roadways and provide clear roads, road markings, and no potholes among many other things. This would be perfect for Downtown Minneapolis but requires a hefty investment like many of the other snowmelt systems.

It sounds nice to always have clear roads and sidewalks, but at what cost are we willing to pay to have those? Considering Minneapolis’s enormous budget for snow removal, it would not seem unreasonable to install these systems in high traffic areas. We also must look at just how we provide power to these systems. Heated roadways need to also be environmentally safe. It would do us no good to reduce carbon emissions by reducing the number of plow trucks and then add all that back by burning coal to provide power. Minnesota is pioneering the push to green energy by expanding wind and solar. Nearly half of its power is generated from zero-carbon sources. This makes Minneapolis, Minnesota the perfect candidate to electrify its roads and sidewalks.

Snow removal is an expensive, labor-intensive, environmentally unfriendly process. By utilizing renewable energy, we can provide some much-needed comfort during the winter months while continuing to reduce our carbon footprint.

A Cleaner Way to Get Around the U
Solar Window