The Great Leap of Faith in Renewables 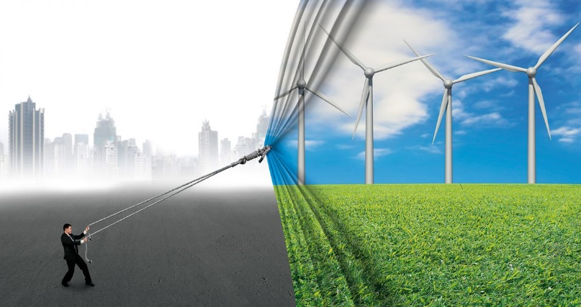 The biggest issue in our energy consumption in this modern age is the rate at which fossil fuels are being consumed. The waste excreted from the use of fossil fuels is very damaging to the atmosphere and will have a profound impact on the future of civilization. Fossil fuels are responsible for ever increasing carbon emissions emitted into the atmosphere, harming global temperatures, and is the root of the infamous “Global Warming”. There is more bad news as fossil fuels reserves are estimated to only last another 50 years at our current consumption rate. With the lack of resources, there is no telling what potential future conflicts might occur in 50 years because of this limitation. There has been a major revamp on the energy industry in the past 20 years because of this, and it has greatly impacted the livelihoods of many people. Many Initiatives have been put in place by the government to help change the energy industry in many different states in the US. I will be mainly focusing on Minnesota’s energy transition from the early 2000’s to 2019, showcasing the impact it has done to the environment and economy.

Minnesota has come a long way from the beginning of their energy transition and continues to put up good numbers in their campaign to go carbon free by 2050. With global initiatives to transition into renewable energy, Minnesota is currently doing well in the US, being 7th in wind energy output in the nation. Based on the data by Minnesota Commerce Department, Minnesota’s clean energy generated 25% of the state’s energy in 2017 compared to 8% in 2008, a 3 fold increase over the past decade. This increase of renewable output has also prompted a decrease of coal energy from 59% to 39%, further reducing carbon emissions. Carbon dioxide emissions reached 180 metric tons in 2004 and it declined to 150 metric tons in 2016 because of the transition. Wind energy is Minnesota’s biggest contributor in renewable energy, covering a total of 18% of the total 25% of clean energy generation, and has continued to be a powerhouse in providing clean and sustainable energy for the people. Currently, the biggest contributor to energy is still coal, as it makes up 39% of the energy output of the state, it also produces more carbon emissions than any other source, coming in at 27.5 million metric tonnes of harmful CO2 being released to the atmosphere. Even though the numbers are staggering, it still pales in comparison with the carbon emissions from 2005, coming in as high as 40 million tonnes of CO2 emissions. During that time, coal energy took up 70 % of the state’s energy output, which has shown a great deal of progression in their journey to zero emissions. Through the transition, the renewables sector managed to create 50,000 new jobs in 2017, compared to 10,000 jobs in 2005, creating a total of 60,000 jobs in just the renewable sector over time.

I know that the statistics stated above can be very daunting to read and filter through but my intention is to showcase the progression of Minnesota’s energy industry transition in hopes to give you a better understanding of our current position in the race to a zero emission future. I hope that through this information I was able to convince you that not all hope is lost in the future for energy as we are only at the beginning of our journey to a cleaner and brighter future.

The World Needs a Revolution … and it’s not Nearly as Dangerous as it Sounds
Why Aren’t You Driving an Electric Car?