Menu
HomeEducationSustainability EducationPlastic Paradise Film Screening – Where is “Away” in “Throw Away”?

Plastic Paradise Film Screening – Where is “Away” in “Throw Away”? 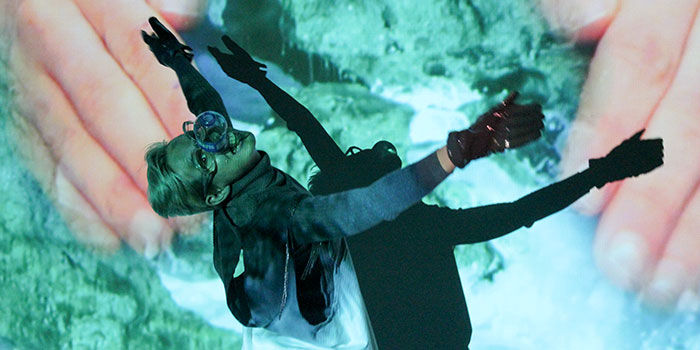 “With the absence of a viable predator, the species faced the threat of extinction through unrestricted consumption of resources and destruction of the global system of life forms necessary for survival.” – Sean Connaughty

The quote is from the work of artist and University of Minnesota art professor Sean Connaughty, who spoke after our screening of Plastic Paradise, the last film in Sustainability Education’s annual Sustainability Film Series. This film concluded the 6th annual Sustainability Film Series, in partnership with the Bell Museum of Natural History, University Services Office of Sustainability, and University Dining Services. Plastic Paradise is a documentary about the Great Pacific Garbage Patch, two giant, spinning, soupy areas of debris and tiny pieces of broken down microplastics between Japan and the U.S., with Midway Island in the middle acting as a big comb, sweeping larger debris onto land and killing thousands of marine birds and mammals. The microplastics, which outnumber plankton in many areas, release toxic persistent organic compounds that are moving up the food chain right to humans, the apex predator. According to the National Geographic Society, most of the debris comes from land-based activity Asia and North America, with fishing and oil rigs and cargo ships dumping trash and fishing nets.

In the film, Angela Sun, Plastic Paradise filmmaker, works to remove abandoned nylon fishing nets with researchers. It seems like an endless endeavor to save all the sea creatures ensnared in the nets and also try to stop them from removing coral and other sea floor creatures. Our culture prizes the  convenience of one time use plastics, a clear contributor to the nightmare that is happening in our oceans. As the film makes clear, there is no “away” when we throw things away. Every piece of plastic ever made is still out there, with only about 5 percent getting recycled globally and most of that downcycled into products that cannot be recycled.

Connaughty is examining the plastic and trash problem closer to home in South Minneapolis with his projects “Lake Hiawatha (anthropocenic midden survey)” and the follow up “Anthropocenic Midden Survey – Preliminary Report.” As of May 10, 2016, he had removed 118 bags of trash from Lake Hiawatha since 2015, weighing in at over 2,000 pounds. The trash, referred to as a midden, or ancient trash pile in archaeologica; terms,  is sorted, counted and analyzed for cultural clues. Polystyrene is the most numerous type of trash, at about 30,000 pieces. As an archaeologist from the future trying to discern the culture and values of these people from the trash pile, the findings have just been published in the “Anthropocenic Midden Survey – Preliminary Report,” giving us a look in the mirror from the future. It is an ugly and sobering look at our habits as humans, who are also capable of so much sublime beauty.

All this talk of trash and the mindlessness of humans can be depressing. But, the point of the Sustainability Film Series and the making of Plastic Paradise is not just to depress us, but to serve as a wake-up call, an alarm and an honest look in the mirror at our part in the problem and more importantly, our agency and power in addressing the problem. We had three artists, Reb Limerick, Ryan Seibold and Sean Connaughty, present before and after the film in hopes of moving people from shock and sadness to action, using art to stir emotion. Connaughty spoke after the film, showing us his projects in Lake Hiawatha and the power of empathy to connect us to each other and other living creatures as the heart of the solution.

Reb Limerick, a University of Minnesota grad student in interdisciplinary art and social practice and multimedia performance artist, performed “Go Dolphins! (What Is Our Porpoise?),” a 14-minute sonic swim through the plastic-littered sea of humanity, before the film. Limerick used a compelling mix of images, wordplay and interaction with the audience as she took us as a “bottlenose” dolphin, with a plastic bottle on her face, through chants of “Go Dolphins” and doing the wave, first as football fans and then to cheering for dolphins as we were asked over and over “What is our porpoise? What is our purpose?” The cognitive dissonance of cheering for the Dolphins football team as a “bottlenose dolphin” swam in front of us was palpable. Just as we entertain ourselves with sports and TV, an easy antidote to looking nature square in the face and asking ourselves “What is our purpose?”

Ryan Seibold, a University of Minnesota landscape architecture graduate, artist and community organizer, presented on his partnership with Connaughty in restoring the land around Lake Hiawatha back to its natural state as a wetland and creating the Hiawatha Food Forest. As an artist and activist working on a big challenging issue, he stressed the power of small, local projects to make waves of change in larger and larger circles. Seibold remarked on the ubiquity of plastic “from paper clips to spaceships” and remarked that one of the first things he found in his search of the Lake Hiawatha trash haul was a plastic leaf — a representation of plant life made of the eons-old fossilized material of the earth. Ryan wants to tell new story of the relationship between plants and human survival, using permaculture and the food forest to reconnect city citizens to nature and our food systems.

Sustainability efforts are widespread across different entities on campus and are pockets of environmental activism and enthusiasm that are growing. This past spring semester three Grand Challenge Curriculum courses related to climate change were offered. Two students from GCC 3010/5010 Empowering a Movement for Change displayed their project on the effects of how to reduce use of single-use plastics, with examples of no-sew shopping bags made from old T-shirts. They were happy to spread information about the plastic bag ban that will go into effect in Minneapolis in 2017, proof that when enough act politically for change, it can happen. There was a big push from plastic bag lobbyists to kill this initiative, but citizen voices mattered and won!

The solution to the problems brought up in Plastic Paradise (and evident in other negative effects of our obsession with consumption and amnesia about disposal), starts with us — you and me. I can consume less. You can use a reusable water bottle. We can demand that companies are held accountable for waste they produce, as citizens, consumers, employees and shareholders. We can do it with small actions and large campaigns and with love and empathy.