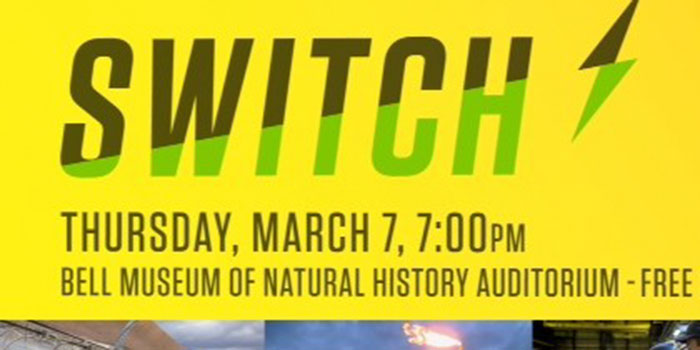 On Thursday March 7, Sustainability Studies hosted a showing of Switch, an in-depth and balanced look at our energy system’s past, present, and future. This was the second installment in the 2013 Sustainability Film Series: Edge of Civilization, a set of four films dealing with the ecological crisis and its impact on human livelihood. About a hundred University students, faculty, and staff, as well as several members of the local community, gathered at the Bell Museum for an evening of pizza, mingling, and learning.

Switch analyzed the present and future viability of several energy sources, including coal, oil, solar, wind, and biofuels. It touched on the technical and economic aspects of each source and went into the relationship each has with the environment.

Elizabeth Wilson, an expert in energy and environmental policy from the Humphrey School of Public Affairs, addressed the issue of energy sustainability after the film. “How do we create a system that is resilient in the face of challenges that we don’t completely understand?” she posed. She went on to discuss her knowledge in the reality of the current energy structure as well as possibilities for the future.

Attendees were asked to respond to a short survey about the experience. Of those who responded, all said they would consider attending another film in the series.