This Changes Everything Film Screening 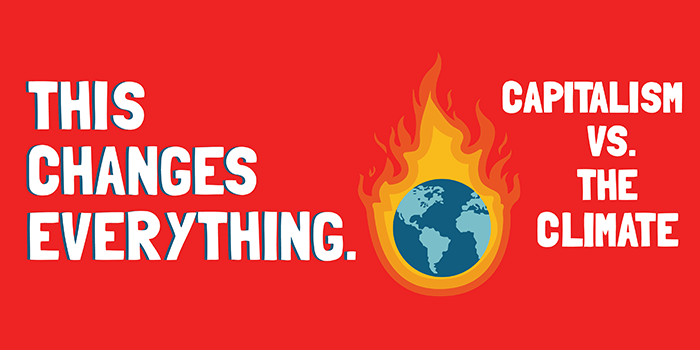 Come see the film that sold out two Minneapolis based screenings last fall, based on the best-selling book by Naomi Klein, This Changes Everything, Capitalism vs the Climate. Here is what the New York Times Book Review had to say about the book: “A book of such ambition and consequence that it is almost unreviewable … the most momentous and contentious environmental book since “Silent Spring.”

From the filmmakers:
“Directed by Avi Lewis, and inspired by Naomi Klein’s international non-fiction bestseller, This Changes Everything presents seven powerful portraits of communities on the front lines, from Montana’s Powder River Basin to the Alberta Tar Sands, from the coast of South India to Beijing and beyond.
Interwoven with these stories of struggle is Klein’s narration, connecting the carbon in the air with the economic system that put it there. Throughout the film, Klein builds to her most controversial and exciting idea: that we can seize the existential crisis of climate change to transform our failed economic system into something radically better.
Filmed over 211 shoot days in nine countries and five continents over four years, This Changes Everything is an epic attempt to re-imagine the vast challenge of climate change.”

Following the film, the panel will:

Panelist Information:
Charlie Thayer is Anishinaabe from the Lac Courte Oreilles and White Earth Nation. He is currently working on his MA from the University of Minnesota focusing on Educational Policy and Leadership. Charlie Thayer is a 2014 Bush Fellow, sits on the coordinating committee for MN350, and is a volunteer campaign and art organizer for Honor the
Earth focusing on environmental justice issues. Thayer has co-authored two publications currently published in the Harvard-Smithsonian Center for Astrophysics and NASA Astrophysics Data System about the effects of invasive species on tribal lands and policy implications regarding scientific research within tribal land boundaries.

Melissa Hortman is a Minnesota State Representative with a legislative focus on renewable energy. Rep. Hortman chaired the Minnesota House Energy Policy Committee from 2013-2014 and was the chief author of a solar energy bill requiring utilities to get 4% of their power from solar by 2025. She co-taught an undergraduate Grand Challenge Curriculum class on climate science and policy in Fall 2015.

Jay Coggins is a Distinguished University Teaching Professor of Applied Economics at the University of Minnesota. He was raised on a small dairy farm in Northern Wisconsin. After completing a B.S. in Animal Science at UW-River Falls, he went on to complete a PhD in Applied Economics at the University of Minnesota in 1989. Professor Coggins’s research interests are primarily in environmental economics and environmental policy. He has published widely on questions related to clean air and water policy, with an emphasis on the role of market mechanisms in achieving environmental protection at low cost. For four years he served as associate editor of the Journal of Environmental Economics and Management. He teaches PhD courses in Environmental Economics, Microeconomic Theory, and Welfare Economics.