U of M students storm AASHE conference in Portland 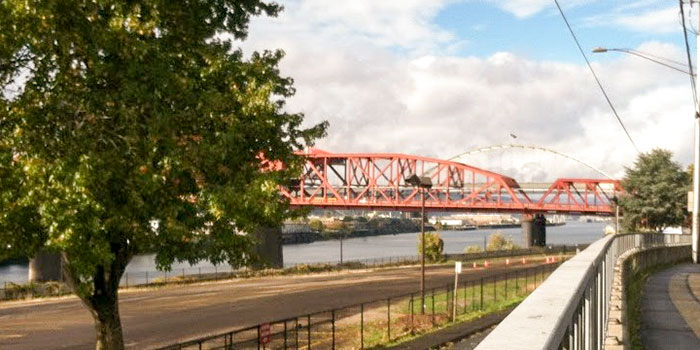 Last week five students from the University of Minnesota—Twin Cities jetted off to Portland to exchange ideas for campus sustainability with students, staff, and faculty at the Association for the Advancement of Sustainability in Higher Education (AASHE) annual conference. AASHE holds the largest conference of its kind in the world, and this year it drew members from every state and twelve countries on six continents. Simone Childs-Walker, Tyler Redden, Bailey Rockwell, Jeff Tierney, and Madeline Giefer represented Sustainability Education during many workshops, roundtable discussions, and networking sessions. Out of the experience they brought back plenty of new ideas from these sessions as well as presentations by high-profile sustainability advocates.

Sunday was dedicated to student action with the AASHE Student Summit, where students participated in workshops on student engagement. From leadership theory to strategizing specific campus initiatives, there was something to support the work of any student activist. The Student Summit closed with a keynote address by Anna Lappé, world-renowned author and educator on sustainable food systems. She raised questions of health inequities, environmental risk, the implications of advertising to children, and corporate power in the American democratic system.

The full conference officially kicked off with another keynote presentation by Annie Leonard, creator of the Story of Stuff campaign. She argued for “busting out of the environmental silo” to bring more disciplines into the sustainability movement. She also mapped out human behavior in terms of our “consumer muscle,” which is continuously rewarded, and our “citizen muscle,” which has atrophied. Leonard believes a collective decision to “flex” our citizen muscles is necessary to “get corporations out of our democracy and the citizens back in” and ultimately achieve a sustainable economy and society. Though Leonard is more optimistic than many about our ability to change for the better, she nonetheless delivered a stern ultimatum: “Are we going to change by design? Or are we going to change by disaster?”

On Monday the conference continued with more sessions on curriculum design, student leadership, and enhancing a university’s role as a sustainability leader and exemplar. There was also a poster session with more than one hundred presenters, which drew so much engagement the session was running strong well past its one-hour time slot.

Monday closed with an address by sustainability and diversity advocate Marcelo Bonta. Sporting bright orange pants, Bonta explained the value of “color” in his life as a metaphor for cultural diversity. Bonta grew up in a multi-racial family and now has one of his own. Early in his environmental career, he had encountered blatantly racist remarks from coworkers and felt a constant sense of exclusion in the field, which later inspired him to found the Center for Diversity and the Environment and Young Environmental Professionals of Color. While he now has a much more positive outlook on this issue, he worries the environmental movement may not be able to incorporate the rising percentage of minorities in the United States, especially children of color who are expected to make up half the U.S. child population by 2019. “In order to be for all, we have to be with all,” he said in his appeal for more active incorporation of people of color into environmental organizations.

The Oregon Convention Center was full of info on proper waste sorting.

The conference closed on Tuesday with a closing presentation by EcoDistricts founder Rob Bennett. EcoDistricts works to heal communities and neighborhoods that are victims of environmental injustice. The organization focuses on “urban renewal,” or working sustainability and community building into urban planning. Bennett believes strongly in the potential of community and campus organizers. “We are the disruptors!” he told the crowd. Bennett’s speech nicely tied together the conference’s themes of university responsibility, community and student action, and diversity and justice within the environmental movement.

Medical student Simone Childs-Walker had great success connecting with other sustainability enthusiasts at the conference, which she believes is critical in her sustainability work. “Place matters. Stories matter. Relationships matter. It is our work to meet people where they are and to be present, humble, and grateful.”

Next year we are fortunate enough to have the AASHE conference in Minneapolis. Organizing such a large international event is a monumental task, so if you are interested in getting involved, contact Madeline Giefer at giefe025@umn.edu.

Sustainability Education was able to send so many students thanks to a grant from the Coca-Cola Foundation through Student Unions and Activities.

Food manufacturers not off the hook: big potential for reducing carbon footprint
Day at the museum: Undergraduate Leaders’ kickoff inspires and connects