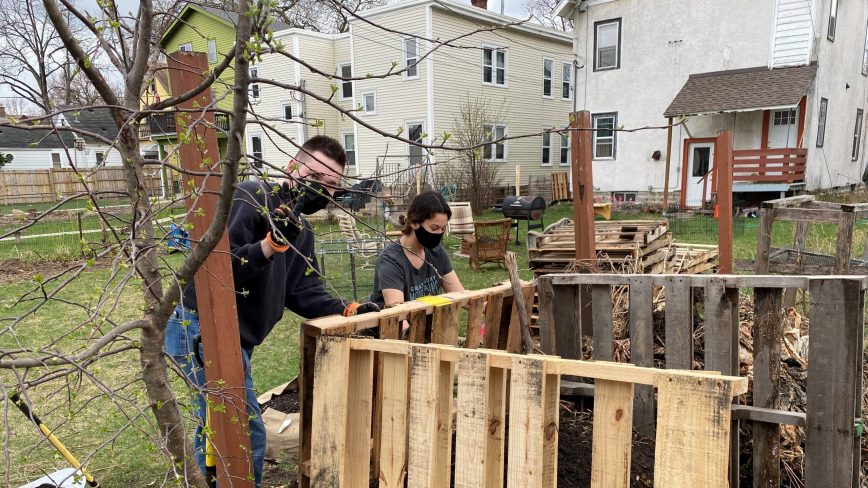 SUST 3017: Environmental Justice at the University of Minnesota is no ordinary class. Born out of a call by students for an environmental curriculum that included intersectionality and social justice, the class connects students with community leaders to work on projects throughout the Twin Cities. From building gardens to telling stories, students in SUST 3017 learned by doing – or in some cases, digging – this spring.

This semester, the class took on a new format. Monday sessions featured lectures on environmental justice topics by Dr. Michelle Garvey, who has taught the class for several semesters. On Wednesdays, students worked with Dr. Julia Nerbonne, TA and doctoral student Hannah Jo King, and several community mentors on scholar activism. Several weeks into the semester, students divided themselves into project groups, each of which was led by one of the community mentors. The students spent the rest of the semester working in their groups, which ranged from Line 3 opposition to regenerative agriculture.

Nick Waskosky, a retail merchandising student who hopes to work in sustainable fashion, was a member of a group focused on regenerative agriculture and community gardening. His group updated and expanded a community garden near the East Phillips neighborhood. They worked with Ruhel Islam, former owner of Gandhi Mahal Restaurant and current owner of Gandhi Mahal’s Curry in a Hurry.

Although Waskosky didn’t go into the project with much knowledge about gardening, he said that it was inspiring to learn from other peoples’ passion, interests and expertise. In addition to learning about community gardening, he also learned about the importance of relationships in environmental justice-centered activism.

“If I’ve learned anything about the EJ movement, it’s that it’s such an interconnected, close-knit movement of people fighting for the same thing in a bunch of different ways. And it’s all through interpersonal relationships and connections that things move forward,” Waskosky said.

Noelle Worstman, a fourth-year graphic design student, said she learned a lot during the Monday class lectures about how she can better plug in to local EJ activism. Her project group was focused on mass incarceration and renewable energy, but due to the pandemic and time constraints was not able to accomplish all that they planned. Still, Worstman said that she learned a lot about community organizing from members of the nonprofit Pueblos de Lucha y Esperanza, who her group worked closely with.

Going forward, Worstman said she will be able to use what she learned about the intersectionalities of design and how the products we create affect people in different places in her work. She also plans to stay involved in the EJ movement after the semester wraps up.

“I’m going to continue to live in the Cities for a while, and I think this is a great place to be involved. And now I have the tools to be involved and I know people,” Worstman said.

Across all of this semester’s project groups, one thing that stood out to Hannah Jo King, who served as a TA and group mentor, was the students’ commitment and self-reflection. “They were such superstars,” King said.

On the last day of class, Dr. Michelle Garvey began class as she often does with an “EJ spotlight” where she takes a moment to recognize someone working for the movement. However, this time, she recognized the students in class who have all been equipped this semester with some of the knowledge and skills they’ll need to work for a just, sustainable future.

SUST 3017 is an elective for the Sustainability Studies Minor. However, it’s open to all UMN students. Consider adding the course to your schedule in Spring 2022!