Menu
HomeEvents7 things we learned about science and community engagement

7 things we learned about science and community engagement 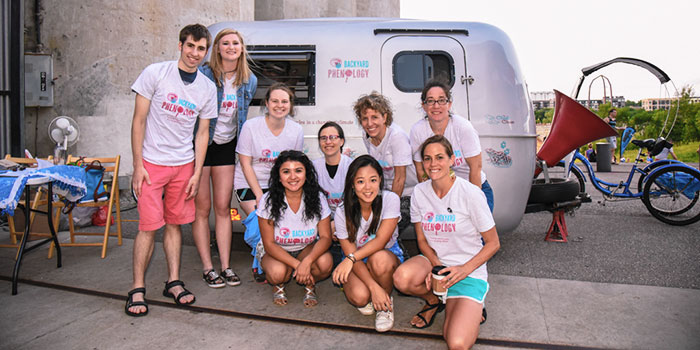 “This year we decided to take a slightly different angle,” said IonE communications director Todd Reubold. “We asked for speakers who could talk about issues that were breaking the bubble or reaching new audiences.”

Ring ring: A phone starts the story. About a year and a half ago, Baeumler got a call from Steve Dietz, president and artistic director of the all-night Minneapolis arts festival Northern Spark. Dietz explained that in 2016 and 2017 the festival would explore climate change, and asked Baeumler to create art related to the theme. Baeumler and Montgomery soon joined together for an interrelated series of projects, often with other collaborators as well.

Here are seven activities they shared with the Frontiers audience:

Backyard Phenology’s participant contributions will form a multimedia artwork slated to appear at the next Northern Spark, which takes place 8:59 PM to 5:26 AM on June 10, 2017. If you’re interested in learning more about the project before then, check out the full video recording of Montgomery and Baeumler’s Frontiers talk on YouTube.

This semester’s Frontiers will happen once every other week. Frontiers will next take place on February 23rd at the University’s Digital Technology Center, located in Walter Library on the east bank of the Minneapolis campus.