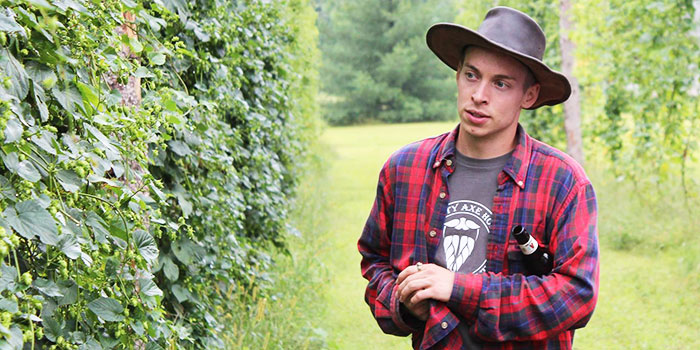 A student-led start-up that was launched during a course taught by IonE’s Acara program has just announced a $4.6 million investment that will support a major expansion of their hops growing business near St. Cloud, Minnesota.

According to a story in Minneapolis/St. Paul Business Journal, the investment will support a “$1.3 million harvest facility and farmland in Benton County’s Gilmanton Township” and involve hiring 6–10 new employees.

Mighty Axe Hops started as a three-acre test plot on a family farm in Ham Lake in 2013. This new financing from Bremer Bank will allow the company to purchase a 120-acre site on which to plant 80 acres of hops which, once planted, will make Mighty Axe the largest grower of hops in the state and larger than all other Minnesota hop farms combined.

Two of the founders, Brian Krohn (CFANS) and Eric Sannerud (CCE), refined the idea of developing a local hops distributorship for the state’s growing craft beer market during an Acara Social Venture Launchpad course. They went on to win the Gold Prize in the year-end 2013 Acara Challenge — a student venture competition — and used the $5,000 award to plant their first market crop.

“Without that first five grand from Acara we wouldn’t have gotten here,” says Sannerud, then a student in the College of Continuing Education. “Acara helped us create and test the model that is becoming a sizeable business. I’d say that’s a pretty good return on investment.”

Few hops are grown in Minnesota at the moment, according to Sannerud, forcing local brewers to shop outside the state and sending about $27 million to mostly West Coast growers. With the new acreage, Sannerud estimates Mighty Hops can keep about 10 percent of those dollars in the state.

“Acara helps students understand how to develop innovative solutions to address community and global social and environmental issues,” said Fred Rose, Acara director. “Mighty Axe Hops certainly has done that. It’s more than a hops farm — it’s a viable way to diversify crop land and allow very small operators to enter the farming economy while also striving to be a model of a sustainable business.”

While Mighty Axe’s business viability is virtually assured thanks to the state’s craft beer boom, the company is equally committed to environmentally friendly farming practices. The company became the first non-corn grower to get Minnesota Agricultural Water Quality-certified and plans to incorporate pollinator-friendly landscaping on their land. Future plans also include installing solar panels in the main building to run farm equipment and a fleet of electric delivery vehicles.

Thanks to this major new investment, the future is bright for both Mighty Axe Hops and local brewers seeking a high quality, locally grown source of hops.