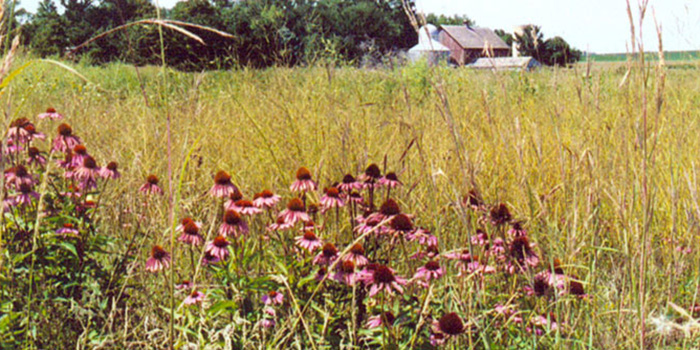 This article is part of a series of profiles of IonE Institute fellows highlighting the value of their collaborations across the U of M, Minnesota and the world.

Conventional wisdom has it that farmers and conservationists don’t see eye to eye. Conservationists want to see farmers plant diverse vegetation, in addition to crops like corn and soybeans, that produces ecosystem services; farmers’ main priority is earning a living. Right?

“Farmers care just as much about the environment as anyone, but there are financial realities,” says Nick Jordan, a resident fellow with the Institute on the Environment and an agroecology professor in the College of Food, Agricultural and Natural Resource Sciences.

Tim Gieseke, a fourth-generation Minnesota farmer with a background in environmental science, explains that it’s just not that easy to plant multiple crops on a landscape. “Adding crops means more work, more equipment, more time. Plus, lots of third- and fourth-generation farmers don’t know how to grow crops other than the ones they’ve been growing,” says Gieseke. “The level of expertise for the crop they know is high and the margin of error is tight. You only get one season, one chance.”

How can these interests be reconciled? With the help of two cool technologies, Jordan and a cross-disciplinary team from the University of Minnesota are bringing farmers and conservationists together in an attempt to satisfy both economic and environmental bottom lines.

Jordan aims to prove that farmers and conservationists can find common ground. What makes him optimistic is — cool technology number one — a process being developed at Michigan State University that can turn biomass (plant material) into a marketable commodity. “This could be a game-changer,” he says.

“Traditionally, biomass has conservation value but little economic value,” Jordan says. The new technology treats biomass with ammonia to make the sugars accessible, transforming it into a high source of energy. “It has the potential to increase the value of a cornstalk 80 percent,” says Jordan.

Biomass, typically corn stover in Minnesota, is considered an untapped resource, constituting up to half of crop residue. “A very large amount of biomass can be produced in the upper midwest with little competition from food production and lots of environmental benefits,” says Jordan. “The new technology makes pellets that look like alfalfa pellets that you can feed to cows or sell to a biorefinery that’s making cellulosic ethanol. Or make biodegradable plastic bottles.”

With a market for biomass comes greater incentive to grow a variety of crops, such as perennial grasses that improve water quality and filtration while increasing biodiversity. And there is an added benefit of making existing cropland more productive.

“It was a chicken and egg problem. Farmers could grow biomass crops, but there was no market to sell them to. Investors were reluctant to build the refinery because there wasn’t enough supply to make it cost-effective. This technology brings both sides together,” Jordan says.

With the possibility of a market for biomass crops, Jordan and his team needed to get farmers and conservationists together. They convened eight workshops in the Seven Mile Creek Watershed in south-central Minnesota, a high- producing agricultural region with poor water quality and good potential for improved biodiversity and water quality services. The first four workshops offered farmers, resource conservationists, state agencies and business interests a forum for sharing concerns and perspectives.

“The touch screens give a good visualization of the landscape, the soil, slope, water quality and habitat protection laid out with metrics to calculate the risks and benefits of different planting patterns,” says Gieseke. “The next step would be to get down to the field scale, at the level where farmers make decisions.”

The workshops provided Jordan and his team encouragment to move forward with the next phase of the project. “We wanted to see if we could get folks to go through the process, see if there could be a win-win.” And the answer? “Yes!”

With funding from an IonE Initiative for Renewable Energy and the Environment grant, Jordan and his team will try to match farmers willing to produce biomass with buyers who can market it.

“As a land-grant University, the U of M needs to provide a constructive presence, highlight opportunities and reduce friction. And we need to apply research in the real world,” says Jordan. “We have good funding and good tools and good folks on the team – U-Spatial, landscape architecture, Extension. And we have a business model we think will work.”

Check out this video, put together by U-Spatial’s Molly McDonald, that shows the touch screens in action.

“These workshops were like a fast-forward for the evolution of a conversation — from the very simplistic agriculture-vs.-environment ‘conflict’ to a much more nuanced, complicated and respectful understanding of costs, benefits, trade-offs and perspectives surrounding the potential of biomass production to be a driving force of positive outcomes for multiple interests,” says Karen Galles, coordinator for the Seven Mile Creek Watershed. “It started out  feeling like people were there to defend their own positions and silos of interest. But as people began to get to know each other and work together toward a shared vision for the watershed, those barriers began to subside. A little bit of empathy goes a long way to creating the mental space for meaningful collaboration on tough issues.”

Enter cool technology number two. For the next four workshops, participants got to roll up their sleeves and “plant” crops on a parcel of land in various configurations without ever getting their boots dirty. Using a touch screen technology developed by U-Spatial, a transdisciplinary, collaborative U of M project, attendees were able to choose and place crops on a 5,000-acre farm, get instant feedback on the economic and environmental impact of their design, and compare alternatives side-by-side.