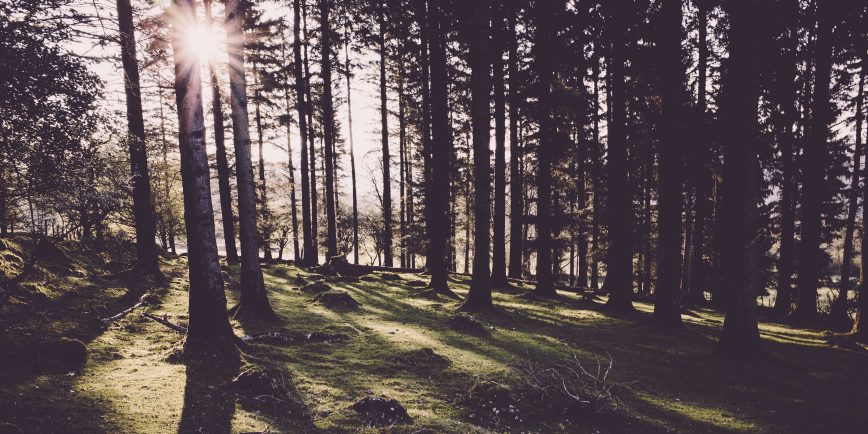 Over the past year at the Institute on the Environment, we’ve been rolling out new Impact Goals, outcomes that the IonE community can rally around and work together to move the needle on sustainability. One of the first goals now underway is helping to build a carbon-neutral Minnesota – for our region and for our planet.

To achieve this goal, we will need to dramatically reduce, and potentially eliminate, fossil fuels used for energy. This will require new technology, new business models, and other innovations, and all of those things require open and fearless dialogue with one another. To share his thoughts and experiences in this work, I’ve invited Troy Goodnough, sustainability director at the University of Minnesota Morris and member of our IonE community, to take over my Director’s Almanac this month. Troy and his Morris colleagues have proven that ambition, collaboration, and openness to new ways of thinking CAN pave the way to a better future, and we all have much to learn from the “Morris Model.”

Having a Vision Pays Dividends

What do calculators, TVs, computers, mobile phones, and modern wind turbines all have in common? All of these things were expensive in the not-too-distant past. Lots of folks thought we didn’t need them, and now we can’t imagine life without them. They also all originate from a person (or persons) with a vision, a vision that things could be different. With a few quick internet searches, you can read quote after quote from business leaders who were dead wrong about transformation in their own industries. They were wrong about the speed of adoption and the rate of social change. Here’s a simple example: in 1970, a calculator cost a week or more of wages; five years later, the cost dropped 20x and nearly every household had one.

Americans have a strange relationship with invention. On the one hand, we venerate innovators like Bill Gates and Elon Musk. Icon-inventor Steve Wozniak was at HP working on scientific calculators when he imagined a personal computing device. HP couldn’t imagine why people would want them; so Wozniak found another path and invented the Apple computer.

But when it comes to understanding the process of innovation – rather than the inventors themselves – we seem to be much less interested. Perhaps we prefer the cult of personality to the culture of process. When I hear someone say that an important innovation is expensive or slow, I wonder if they are speaking off the cuff or if they really know what they are talking about. In truth, the story of innovation is replicable, but it seems like we have to continually rediscover it.

Innovation is rarely just about a technology, but also the process of uptake and adoption. That takes vision too. In Minnesota, for example, corn ethanol didn’t just appear from the invisible hand. There was an ecosystem of innovation that worked to create policies that promoted it, created a market for it, and brought the technology to the new market. Farmers, co-ops, commodity groups, scientists, and politicians collaborated to create the conditions that opened up new economic possibilities. Ethanol production grew from 1M gallons in 1987 to 1B by 2011. Today, the business generates nearly $7B in revenue for Minnesota’s businesses, adds about $2B to the state economy, and provides $204M in state and local taxes.

The same technology and market innovation is happening now — and needs to be accelerated — to stop emissions of greenhouse gases. Only ten years ago, utilities in Minnesota did not think wind turbines would be a good investment. The entrenched wisdom was that wind energy was expensive, and we couldn’t reliably integrate significant amounts of it onto the grid. Ergo, it wasn’t worth pursuing with vigor, even though we knew climate disruption was getting worse. That tide turned, however, thanks to innovation.

Technology, environmental activism, and policy were key ingredients in the innovation process that made wind power the energy of choice today. On the policy side, Minnesota passed the bipartisan Next Generation Energy Act in 2007. The law set a goal of 25% renewable energy by 2025. Minnesota met that goal almost a decade ahead of schedule. Over this same timeframe, wind industry leaders fought hard to improve the technology. In 2007, Vestas was installing one turbine every 4 hours somewhere in the world, and activism at college campuses compelled 284 institutions across the country to sign the American College and University Presidents’ Climate Commitment — with each campus making a commitment to carbon neutrality and a planning process. In 2007, environmental organizations and students were working together to shape a clean energy future and were protesting future expansion of coal-fired power plants. By 2016, the US Bureau of Labor of Statistics named wind service technician their fastest growing job of the decade.

These wind innovations, like all innovation, did not follow a linear path. But people with vision came together; they found funding to test their vision (as start-up companies, university scientists, and even countries); they engaged early adopters to share in their vision – and eventually convinced larger entities (companies and governments) to promote, make room for, and adopt their vision too. And in the case of wind, steadily, prices went down.

A key innovation we need now in Minnesota and around the world is cheap energy storage, because renewables are intermittent and batteries can store that clean energy. To achieve this, we will need to follow the same path of innovation we have walked before.

In truth, there is an opportunity cost when we don’t innovate and use our state and national dollars to incentivize that innovation. In Minnesota, for example, we could have built new coal plants 10 years ago, and some utilities wanted just that. If we had pursued an energy path with old technology, we would have nationally wasted billions of dollars using an aging technology on the verge of being replaced with something cheaper and cleaner. Just one of the coal-fired power plants proposed in Minnesota was over $1B.

Finally, the clean energy revolution is providing new opportunities for rural Minnesota. The UMN Morris campus gets 70% of its electricity from renewables. The majority of that power comes from two 1.65MW wind turbines. The UMN West Central Research and Outreach Center (WCROC) is researching new ways to make ammonia fertilizer from prairie winds and water, feeding our crops with fossil-free nutrients. Within one mile of Morris, you can see wind, solar, and biomass projects that are helping to build local energy solutions.

The community of Morris is also working together as a team to make this sustainability progress. This group of changemakers call themselves—and the work they are doing—the Morris Model and includes the city, county, public schools, hospital, UMN Morris, WCROC, and other partners. The team has created a Strategic Plan for the community to advance sustainability initiatives in energy, waste, transportation, and education. Together, the team is making progress. Electric cars and charging stations have been added to city and campus fleets. LED lighting has been installed across the city and campus. Solar projects have been installed at the school and WCROC. A new renewable natural gas (RNG) project is taking shape in the county. The city of Morris was also the first city to join IonE’s Climate Smart Municipalities program, which has paired Morris together with Saerbeck, Germany, a winner of the European Energy Award and one of the greenest cities in Europe. Saerbeck’s remarkable transformation began with a community vision.

In Morris, innovation is a team process and is a replicable model for other communities in Minnesota. All of these projects in Morris have taken vision and persistence, and each one has a fun story of how it came to fruition. As a team, we have brainstormed over 100 projects we want to tackle to advance our shared sustainability aspirations. What are 100 projects your community could get started on?