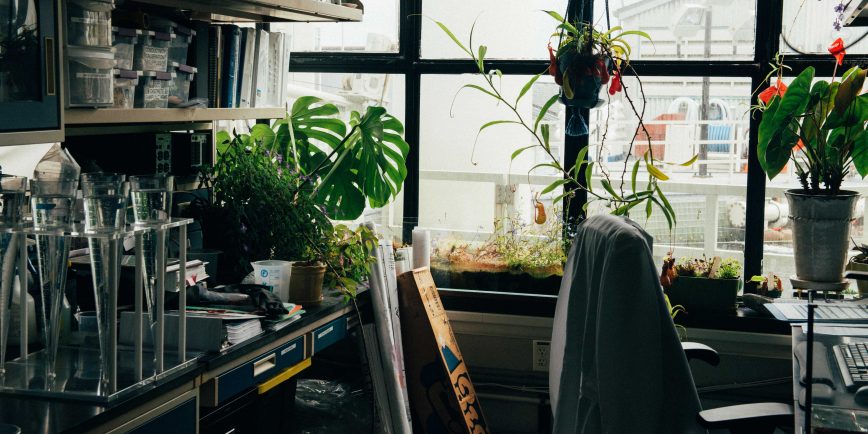 This month I’m writing about my friend and author, Hope Jahren. Hope was the keynote speaker at our recent symposium, Speaking Science, and I had the pleasure of introducing her. The opportunity prompted me not only to think about why Hope is such a compelling and interesting person, but also gave me a chance to share some thoughts about the broader topic of science communication. I reproduce some of those thoughts here because I know this topic is top of mind for many of us these days.

More than a decade ago now, the Institute on the Environment started pursuing science communication – the deliberate effort to inform and inspire the public with science, and to seek input and feedback. We were part of a small group of people and organizations that believed that environmental scholars could and should be engaged in active conversation with society — even that they had a duty to do so. At first it was a bold claim that academic researchers deserved a public voice and a seat at the table of societal decision-making.

Today, we find ourselves in a different moment — a moment when science communication (or in shorthand, #scicomm) in all fields is much more widely accepted. Scientists that value and engage in science communication are now part of a broader movement — a transformation in the extent to which scientists engage the public in conversation. Today, communicating with non-scientific audiences is not just an add-on. It has become a core part of many scientists’ work, and that’s the case for many other fields, as well.

Even in this heyday of science communication, studies — including a very recent one in the Proceedings of the National Academy of Sciences — suggest that a persistent barrier to engagement in public communication is a perceived lack of institutional support. Close on its heels is lack of confidence — the widespread sentiment of those who have important stories to share that they lack the ability or skill to do so.

At IonE, we are proud to have helped build a University where #scicomm is not only respected, but the topic of a university-wide symposium for anybody and everybody who’s ready and willing to improve. We’re also making the topic accessible to the public — and, of course, streamable — in an upcoming Second Mondays event featuring a panel of professional journalists who cover the environment. Through these initiatives and others, we’re doing our best to help scholars clear those institutional and confidence hurdles.

But speaking both from my experience and what I’ve heard from others, there’s a third barrier to engaging in #scicomm that leads me to Hope Jahren. That barrier is a lack of role models and mentors. Hope is mine.

I’ve known Hope since 2011, when we were members of a cohort of environmental scientists called Leopold Fellows. Being a Leopold Fellow basically meant joining #scicomm boot camp.

Most of us were relatively early in our career, and though we had ambition, none of us really knew what we were doing or how we were going to pull off what was being asked of us. Two intensive weeks of training and a decade later, each of us has come a long way. Today we actively support one another in our #scicomm work, and all my Leopold mates have gained the pleasure of calling Hope Jahren a friend.

I won’t recount Hope’s entire bio here. There are plenty of places you can go to learn about her significant accomplishments and contributions to her field, which is the study of fossil and living plants with the use of stable isotopes. She is a scientist of the highest caliber. But Hope is additionally something most scientists aren’t: She’s the author of the highly acclaimed Lab Girl, a personal narrative about a life of science, and The Story of More, a forthcoming book that explores the underlying causes of climate change and what we can do about them.

According to a review of Lab Girl in the New York Times, Hope “communicates the electric excitement of discovering something new — something no one ever knew or definitely proved before — and the boring scientific grunt work involved in conducting studies and experiments: the days and weeks and months of watching and wanting and gathering data, the all-nighters, the repetitions, the detours, both serendipitous and unfruitful.”

What I think is extraordinary about Hope’s popular writing is her ability to speak with an authentic voice. I invite you to think of any long-form narrative about a living, breathing scientist that is both brutally honest and awe-inspiring. Lab Girl does exactly that.

Hope writes in Lab Girl that as a scientist, she’s really just an ant: “insufficient and anonymous, but stronger than I look and part of something that is much bigger than I am.” I don’t see her contributions as insufficient, and certainly not anonymous. In writing about herself—and really about all of us who work as scientists, in any field or form — Hope has given the world an extraordinary gift. She has shown us the human side of science — that science is conducted by real people — and she produces a stellar example of how to write about scientific ideas in a compelling and approachable way.

That gift of inspiration and example is much bigger than Hope herself. We all have much to learn from it. And we all owe her gratitude.

Sometimes reflecting on a role model can make all the difference. Hope inspires me, and I hope she will do the same for you.

P.S. Want to hear more about the science communication we do at IonE? Check out a presentation I will be giving with my colleagues at the American Association for the Advancement Science meeting next month: Public Engagement at Universities: Pathways for Institutional Support. I’ll be talking about the importance of peer mentoring and peer support in building the capacity of emerging science leaders.