Menu
HomeDiscoveryGlobal Water InitiativeGlobalDispatch from Paris: A global assessment of biodiversity and ecosystem services, three years in the making

Dispatch from Paris: A global assessment of biodiversity and ecosystem services, three years in the making 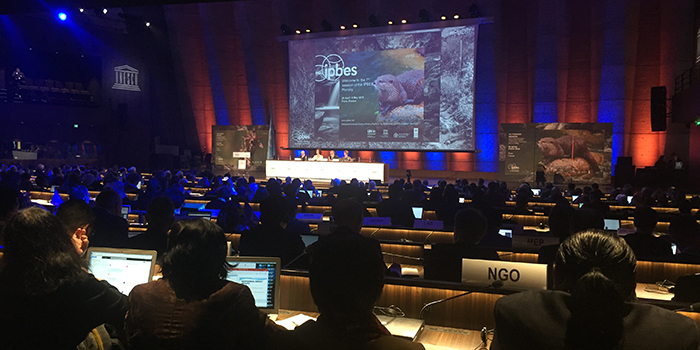 If you’re not familiar with IPBES, it’s a worldwide alliance established in 2012 whose mission is to strengthen the knowledge foundations for better policy through science. It taps into expertise across all disciplines and knowledge communities, producing objective assessments about the planet’s biodiversity, ecosystems, and the benefits they provide to people – as well as the tools and methods to protect and sustainably use these natural assets.

Today I’m sitting on stage in the second row, looking out at delegates from the 132 IPBES member states, who’ve all come to Paris to discuss the Global Assessment that more than 150 experts have been working on for three years – dividing and conquering, chapter by chapter.

Drawing on nearly 15,000 references, it’s the first synthesis of the global state of nature since the Millennium Ecosystem Assessment of 2005, and the first ever to be intergovernmental as well as to systematically include indigenous and local knowledge on a global scale. Yesterday I was front and center, with the privilege of kicking off the part of the plenary where the countries negotiate and (hopefully!) approve the “Summary for Policy Makers.”

The key messages from the chapter I helped lead are the first points in the Summary (or “SPM” in United Nations lingo), so my role was to present our text and responses to initial comments. It went well, but it still took nearly the whole first session to get through our three paragraphs, and as the Chair kept reminding us: There are 72 paragraphs all together. The translators go home at 10:30 p.m., but we kept working until midnight last night.

I might have seen this coming, since the U.N. has a procedure for everything! But three years ago, when the Institute on the Environment nominated me to serve as an expert on the IPBES Global Assessment, I didn’t have a clue how it would unfold. I’ve been researching the way land management affects water affects people – hydrologic ecosystem services – for nearly 15 years. That knowledge base has been critical, but the fun part is that I have also learned a ton about all kinds of other benefits of nature – and met some amazing colleagues along the way.

From the first Lead Author meeting in Bonn (followed by Leipzig, Cape Town, Frankfurt, and St. Paul – a special meeting for just our chapter at IonE) Steve Polasky and I, along with Lucas Garibaldi and Chim Zayas, have been coordinating a group of experts from across the globe as we evaluate and summarize the huge body of research and report on the status and trends of nature’s contributions to people. That would be all of them (we’ve been working with 18), everywhere, for the past 50 years. Did I mention our work is only a subset of chapter 2 of the assessment? There’s a lot going on here.

Curious what we learned? I can’t talk about the findings until the governments negotiate and (again, hopefully!) approve the summary and it is released this coming Monday, May 6. But I can say that the science-policy interface is messy – in the best of ways. It’s both boring and exciting, predictable and unexpected. The Summary for Policy Makers was written by a team of coordinating authors, including the co-chairs of the assessment and leads from all six chapters, summarizing all of the larger report into 28 key messages, 40 background/supporting paragraphs, 11 figures, and one monster of a table. That probably sounds like a lot, but the three key messages from our sub-chapter alone had to be summarized from some 34,000 words spanning more than 60 pages, plus 30 extra pages with 616 references.

Before we gathered in Paris, the U.N. translated the summary into six official languages, and many governments submitted comments ahead of time – asking for clarifications, why use one statistic instead of another, and ensuring ideas critical to their positions were included. We spent four days holed up in the basement of UNESCO, where the plenary is being hosted, addressing those comments and preparing to get in front of the governments and explain what we did. That happened yesterday!

Only 60 more paragraphs to go…

Stay tuned on Monday! The IPBES Global Assessment Report on Biodiversity and Ecosystem Services has been three years in development. It covers all land-based ecosystems (except Antarctica), inland water, and the open oceans, and evaluates changes over the past 50 years. A primer about the scope of the report is available in six languages. Kate Brauman is a lead scientist at IonE and director of its Global Water Initiative.

2019 Sustainability and Energy Expo
A running start: The newest round of Mini Grant recipients