In Germany, U of M students learned from renewable energy leaders – and vice versa 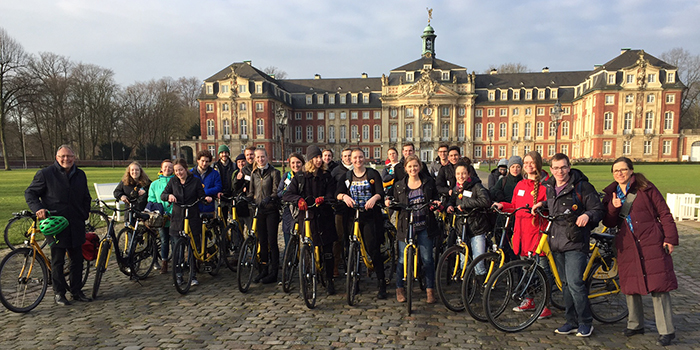 Few college students can say they’ve traveled to Germany. Far fewer can say they have — and that they laid the foundation for generations of environmental innovations along the way.

From January 2 to 14, a 22-member delegation of students from the University of Minnesota Twin Cities and Morris campuses traveled to Germany to study the ways in which cities, farms, and regions can best address environmental challenges. The program, called Germany: Leading the Renewables Revolution, is a study abroad opportunity co-developed and led by Sabine Engel, Director of International Partnerships, and Beth Mercer-Taylor, Sustainability Education Coordinator, both of the Institute on the Environment. The College of Food, Agriculture & Natural Resource Sciences (CFANS) partnered with IonE to develop this new study abroad opportunity.

Leading the Renewables Revolution was developed to accompany Climate Smart Municipalities, which pairs Minnesota cities with sustainability-leading German cities to collaboratively explore and advance economically beneficial, climate-smart energy strategies. To achieve its sustainability goals, Engel says, Germany has turned to its youth. “To get there, they know that a full collective effort is needed that includes grooming the next generation of citizens.”

The same is true close to home. “We have been thinking about how to create additional momentum for the city initiatives,” Engel says. “Minnesota’s energy transition has so much to gain from involving the next generation.” Thus, with the collaboration of IonE and Climate Smart Municipalities’ other Minnesota partners, Leading the Renewables Revolution was born.

The students met on three Saturdays to prepare for their trip, learning about both Minnesota and Germany’s approaches to renewable energy. During their two weeks abroad, students interacted with a range of German partners, including state agency deputy directors, department heads, specialists, municipal leaders, private sector company leaders, and researchers. “Delegation members demonstrated to all German partners that sustainability and renewable energy efforts will continue to move forward in the United States at the state and municipal level,” says Engel. “Hearing from 22 young people gave the Germans hope for the future.”

One such partner was the Honorable Heinrich Botterman, deputy minister of North Rhine Westphalia’s Ministry for the Environment, Agriculture, Nature and Consumer Protection, who gave a presentation to students on January 4. The following day, the delegation met with members of the North Rhine Westphalia Landtag (Parliament), where CFANS sophomore Anna Brekke spoke on behalf of the students, sharing how she became interested in sustainable energy and her plans to implement her newfound knowledge upon her return from Germany. At the trip’s conclusion, teams of student delegates created renewable energy plans for the City of Morris, Minnesota and presented them to the Mayor of Saerbeck for review and feedback.

The students made a positive impact. “The delegation’s enthusiasm was contagious and encourages all of us at the U.S. Consulate General Dusseldorf to continue to promote transatlantic partnerships at the state level,” the U.S. Consulate shared on Facebook. One such partnership has already been established. For three to five months in 2018, the University of Minnesota will host three energy interns from the Muenster University of Applied Sciences and the University of Siegen, and, in turn, two students from the U of M will have a chance to intern with IonE’s German partners.

Brekke values these connections, as well. “Exploring the renewables revolution in Germany confirmed that these actions are possible and that there is vast potential to make lasting change,” says the sustainable systems management major.  “I now have a community that shares my passion for sustainability that I look forward to working with in the future.”

IonE and CFANS plan to continue to offer Germany: Leading the Renewables Revolution to students in coming years.

Grace Becker is the communications assistant at the Institute on the Environment and an undergraduate student at the University of Minnesota, where she studies Strategic Communications and Spanish.