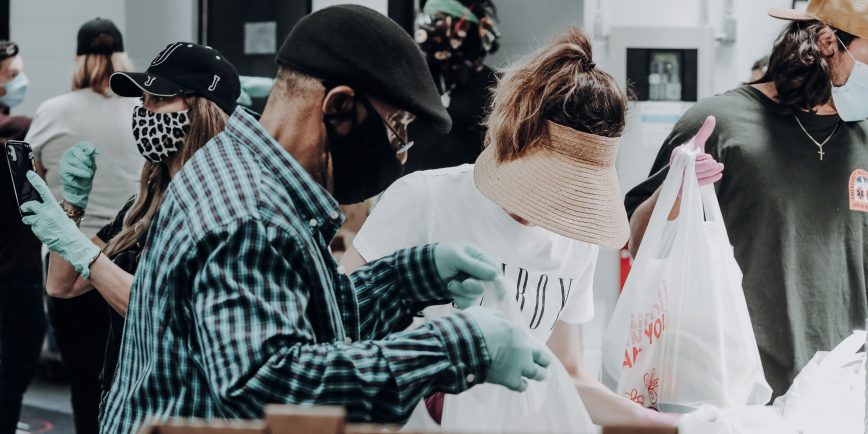 Per the USDA, an estimated 10.5 percent of households in the United States experienced unreliable access to affordable healthy food, or food insecurity, in 2019. That’s a staggering statistic – and yet it had been a 20-year low for the country. But in 2020, with massive unemployment caused by the global COVID-19 pandemic and widespread property damage caused by a summer of civil unrest, that number quickly escalated. Hunger-relief nonprofit Feeding America estimates that nearly 50 million additional people will experience food insecurity this year.

In the Twin Cities, home of the Institute on the Environment, property damage following the killing of George Floyd in May led to several major grocery stores having to board up and pop-up food shelves having to close, creating an even more urgent food-security crisis. It made IonE lead scientist Eric Lonsdorf wonder if he and other IonE staff could redirect their research and data visualization skills to help city and neighborhood leaders respond to the problem.

Together with Barb Jacobs, then an IonE staff member, Lonsdorf first reached out to city, neighborhood, and NGO leaders to determine if this kind of analysis would be helpful. Originally, they aimed to simply measure changes in how far people had to travel to reach the closest grocery store, but when the City of Minneapolis requested that they also map the locations of food shelves and pop-ups, that goal grew. IonE staff, including Lonsdorf, Jacobs, Heidi Ries, Melissa Kenney, Peter Hawthorne, and Chris Nootenboom tackled the work, with Hawthorne and Nootenboom leading the mapping efforts.

“Our approach to mapping food security was to assess the potential demand for low-cost or free food relative to its supply across location and time in Minneapolis,” Lonsdorf explains. In comparing the number of food markets and shelves from June 2020 to September 2020, the team found that food pop-ups declined by half and that the intensity of food demand nearly doubled. (Read the full assessment.)

By rapidly prototyping multiple maps showing newly-formed food deserts in the Twin Cities metro area, the IonE team helped city planners and others involved in front-line efforts to distribute food and other household supplies to families in need. The City of Minneapolis was also able to use the maps they created to advocate internally for $1 million of the Coronavirus Aid, Relief, and Economic Security (CARES) funding be spent on addressing food insecurity, says Patty Bowler, Director of Policy and Healthy Communities for the City of Minneapolis’ Health Department.

“As a result, the Minneapolis Health Department worked with the Mayor’s office to issue approximately $970,000 of CARES funding to 37 organizations to increase food security in response to COVID-19,” she reports.

Thanks to IonE’s assessment and the City’s direct response, important steps towards reducing socio-economic and racial disparities in food security have been taken. Awards ranging from $2,000 to $53,000 from CARES funding were granted to organizations that serve BIPOC communities and vulnerable populations, including older adults and people experiencing homelessness, Bowler says.

IonE’s ability and success in responding to the emerging needs of its community has much to do with how the Institute approaches research: with an interdisciplinary lens, and by prioritizing methods such as decision support and systems analysis and modeling. These methods allow IonE and its community to lend expertise in a variety of contexts.

When crisis or time-sensitive situations arise, “it’s not just one kind of expertise that’s needed to solve the problem,” says Melissa Kenney, IonE’s Associate Director for Knowledge Initiatives. “We need people thinking about [the challenge] in lots of different ways, and that’s one of the things that IonE does well.”

Lauren Klemstein is a student communications assistant at the Institute on the Environment.

Forces of change for our future: Our newest batch of Mini Grant recipients
Director’s Almanac: The impact of patience