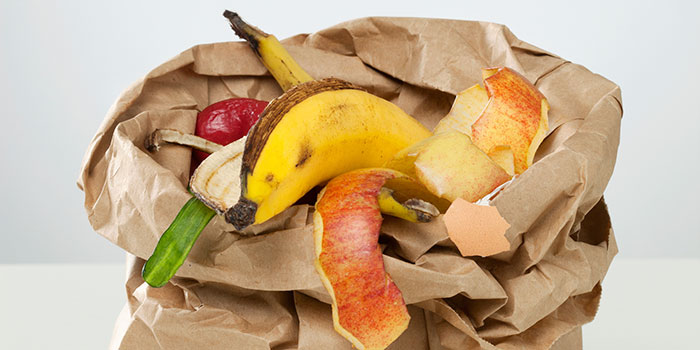 Wouldn’t it be cool if you could turn those discarded banana peels and eggshells into fuel for your car, just like Doc Brown did in “Back to the Future?”

Technology to do that is in development at the University of Minnesota College of Food, Agricultural and Natural Resource Sciences. The project, called WasteNot and funded by a grant from MnDRIVE Global Food Ventures, is looking at such technology as one of three options to stem the tide of food waste going to landfills in the Twin Cities metropolitan area. Turning food waste into animal feed and farm fertilizer are other options being explored. IonE’s NorthStar Initiative for Sustainable Enterprise is helping project researchers identify where food waste is being generated and possible pathways to end users.

The goal of WasteNot is “to learn how to re-engineer our system of handling organic wastes — food and sewage biosolids,” says project lead Lawrence Baker, bioproducts and biosystems engineering professor in CFANS.  “Currently, most food waste is disposed to landfills directly or incinerated followed by burial of the ash in landfills.”

Twin Cities households generate about 495 million pounds of food waste a year — 430 pounds per person — and grocery stores and restaurants contribute another 800 million pounds, according to NiSE lead scientists Jennifer Schmitt, who is part of the WasteNot research team.

“This level of waste is both an environmental problem and an opportunity, if we can identify markets for the by-products,” Schmitt says.

Food waste is an environmental problem in many ways. Greenhouse gas emissions such as methane and nitrous oxide from decomposing food are greater than total emissions from every country in the world except the U.S. and China, according to the Food and Agriculture Organization of the United Nations. Wasting food also wastes the irrigation water, fertilizer and impacts to land and water that went into producing it in the first place. On top of that, there are costs to sending waste to landfills, and landfills in densely populated areas are beginning to fill up. WasteNot was initiated to address these issues.

The research team includes expertise in engineering, animal nutrition, applied economics, political science and law. “We are moving some aspects of the projects from the lab to the demonstration scale,  planning an experiment to feed swine dried, processed food waste,” which Baker said is vital step toward commercialization. “Another experiment has shown that the phosphorus in biosolids ash can support crop growth nearly as well as commercial fertilizer, and economic modeling shows that full-scale implementation might be more cost-effective than burying the ash in a landfill,” he said.

As for turning food into fuel, CFANS professor Roger Ruan thinks the technology he’s developing holds a lot of promise. Called microwave-assisted pyrolysis, the process turns food waste, including any nonfood materials that may be mixed in, into three marketable products: char residue (the biosolids ash Baker refers to), synthetic gas (syngas) and bio oil. The gas can be used as heating fuel to make electricity and the bio oil can be upgraded to make engine fuel.

“Restaurant waste, with its plastics and fats, makes a good quality bio oil,” says Ruan. His research team has built a mobile unit that can work right where the food waste is generated. It takes propane to start, but after being fed the food waste it continues to run off the syngas it produces while also producing char residue and bio oil. So far it has only been tested on a small scale. The technology needs investors to refine and scale up to accommodate a waste stream such as that of a city which, says Ruan, could benefit from such a system.

“Businesses and municipalities such as cities and counties have to pay to dispose of their waste,” he says. “With this type of technology, they could not only save on disposal costs, but generate their own energy in the process.”

Baker says that the greatest obstacle is lack of government investment. “There has been a rapid surge of interest in reducing the volume of food waste disposal through reduction and recycling. So far, however, there has been very little research funding allocated to meet this goal efficiently,” he says.

For her part, Schmitt is continuing to collect data to complete a Minnesota grocery and restaurant food waste map that could be a resource for possible users of food waste, such as farmers. “We want to reduce costs associated with using food waste for things other than landfilling by providing better information on food waste across the state, where it can be found and what’s in it,” she says.

“Ultimately we will succeed and our children will look back at our obsolescent practice of burying organic wastes with the same amazement that boomers experience when they recall the disposal of wastes in open garbage dumps prior to the adoption of covered landfills,” Baker said.

4 thoughts on “Research aims to turn food waste into fuel, feed and fertilizer”