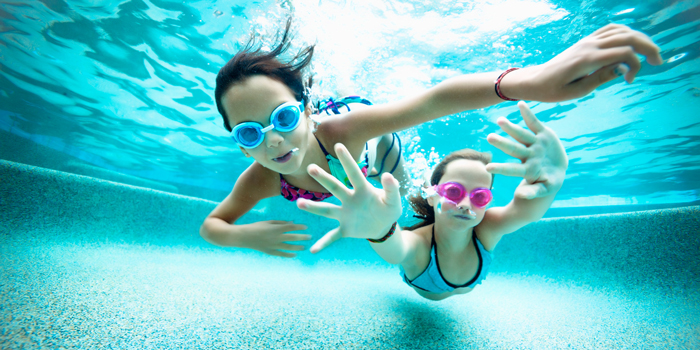 A dip in a cool blue swimming pool can be just what the doctor ordered on these sweltering summer days. Lucky for us there are plenty of pools on the planet — some 9 million residential and 300,000 commercial pools in the U.S. alone. But what happens with all that water when we’re done with it?

Most pools are maintained with chemicals to keep harmful bacteria from growing in the water. These chemicals include cyanuric acid, which keeps chlorine from degrading under sunlight. Once it begins to degrade, more of the compound must be added. Eventually, concentrations of cyanuric acid reach a level that impairs chlorine disinfection and the pool water has to be drained and discarded. Fresh water is added and the process begins again.

Considering billions of gallons of water a year are dumped in the U.S. alone — along with the chemicals and energy that went in to clean and heat it — there’s a big water conservation opportunity, says Institute on the Environment fellow Lawrence Wackett, a professor in the College of Biological Sciences.

“In the not-too-distant future, water will be more precious than oil. We need to do a better job of reusing it,” Wackett says.

Wackett is leading a project aimed at developing a device to filter up to 100,000 gallons of chemical-laden pool water on site. It takes advantage of a common process called bioremediation that employs bacteria to consume toxins in water. What’s unique here is that the filter can be made to “snap into existing systems,” says Wackett.

Wackett says the device wouldn’t have been possible without support from institutions such as the University of Minnesota’s BioTechnology Institute and IonE that promote people with different ideas getting together.

“We have a good team with different strengths,” Wackett says. “My partner, Al, is a mechanical engineer. He was able to take the chemical process and design a body to house it and make it work.”

“Al” Alptekin Aksan, an associate professor in the College of Science and Engineering and the project co-lead, says they faced three big engineering challenges.

“The first was creating an isolated environment that can protect the toxin-degrading bacteria. Second, since few companies are willing to spend money to change their systems, the filter needs to be designed to function within an existing system. Third, companies that need to conduct bioremediation want it done quickly and cheaply, so the filter needs to be affordable and also scalable up to millions of gallons a day,” he says.

With guidance from the University’s Office for Technology Commercialization, which connects scientists to industry leaders who can help put their inventions into practice, Wackett and Aksan patented their bioremediation technology and licensed it to Minnepura Technologies, a company they co-founded in 2014. The company has developed and is currently testing and evaluating several prototypes, and expects a product to be available in 2017 through several global distribution partners.

“We have an opportunity to prevent up to 100 billion gallons of water a year from being wasted from swimming pools, not to mention the energy and chemicals,” says Paul Hansen, Minnepura’s CEO.

The company is also looking into other uses of the filtration device, which can be adapted to clean up a wide variety of chemicals.

“We’re exploring other solutions to clean water that would otherwise be unusable, including removing pesticides from agricultural runoff,” Wackett says. “The challenges there are to scale it up to the size of a field and figuring out how to capture the water for filtration.” Other uses include scrubbing hydrocarbons from water used in energy generation as well removing pharmaceuticals from drinking water, he says. They’re also working on biodegradation processes for chemicals such as aromatic hydrocarbons, developing innovative approaches in which oxygen is delivered by one bacterium that supports degradation by another bacterium.

“Everything comes down to water. Having clean water, not wasting water,” says Aksan. “This technology could help us save a lot of water, making it available for us to use again.”

The Institute on the Environment announces call for new Fellows and Affiliates
What do those “eco-friendly” labels mean, anyway?