Seeing is believing: A new tool to visualize climate change 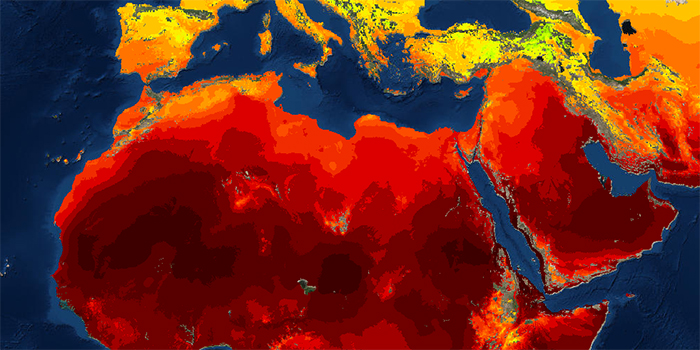 Climate change is a gradual process unfolding on a grand scale, which means it’s hard for people to visualize. It’s a challenge to conceptualize the impact of tangible outputs (such as actual degrees of temperature increase) that result from less tangible inputs (such as changes in emissions). This means that better visual representations of climate change can serve as powerful motivators for conservation efforts.

A new tool, developed by Peder Engstrom, a GIS Scientist with the Global Landscapes Initiative, allows users to see exactly how different regions might be affected under different future climate change scenarios.

The app, which is called Climate Explorer, was developed in partnership with Cargill. The Fortune 500 company wanted to raise its employees’ awareness of climate change and the potential impacts on supply chains, says Peter Dahm, Cargill’s Director of Sustainability and Clean Energy. “Climate change can seem somewhat abstract,” Dahm says, “and we were seeking a way to make it tangible to people who are not immersed in the topic.”

The core idea behind the tool is to present different temperature maps colored in two-degree increments. Since all of the maps share the same color scheme (for example, yellow is always 11-12 C), users are able to visualize how the average temperature in a place such as southern Minnesota, for example, might shift to feel more like central Missouri.

Different “layers” can be switched on and off to help visualize different scenarios.  The layers include current mean temperatures based on the WorldClim dataset, as well as projections for mean temperatures in 2030, 2050, and 2070, based on data from CGIAR’s Research Program on Climate Change, Agriculture and Food Security (CCAFS). The tool uses two of the four available climate scenarios, or Representative Concentration Pathways, where RCP 4.5 is based on significantly more optimistic policy outcomes than RCP 8.5.

As a result, users can explore the regional temperature changes in both the more and less optimistic scenarios. This is key because there’s a large degree of difference between the two outcomes – even if the actual temperature shifts don’t seem that dramatic.

This is the power of a map, according to Engstrom. “If someone tells you a two-degree shift, it doesn’t mean a lot,” he says. “But if you see it, it really drives the point home that different areas are going to look very different.”

The further you look forward via the Climate Explorer, the more the two futures separate: “In 2030 the different scenarios look pretty alike, but when you get to 2050 things really start to diverge.” Understanding this long-term outcome has powerful implications for the importance of action today.

The Climate Explorer “could continue to evolve as new uses and data sets become available,” Dahm notes. From his perspective at Cargill, the tool already has added value and “is helping to shape thinking.” He points out that even though much of the information used for the map was previously available, the Climate Explorer – through visual interactivity – makes the data more usable. “Now, our sustainability and operations teams have access to more tangible localized information to assist in their decision making.”

Adds Enstrom: “We hope that [even] if you don’t agree that climate change is a big deal right now that seeing the maps and being able to touch and feel the different patterns will drive home the point that things are changing.”