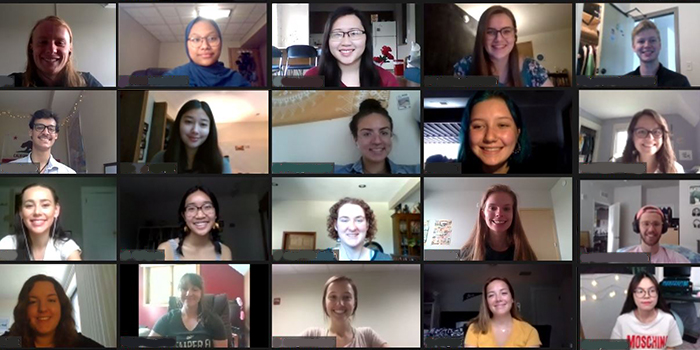 At the beginning of this summer, in-person internship opportunities were dwindling and students were being sent home from college campuses due to COVID-19. Many University programs were being postponed or cancelled. Organizers of the Ecolab Experiential Education Scholarship program, a new philanthropically funded education opportunity at IonE, thought they would have to do the same. However, a huge gap in opportunity for students and environmental organizations began to arise: more and more students began competing for limited online internships. Unable to offer paid remote internships, many environmental organizations were also in need of a helping hand. In response, the Ecolab Experiential Education Scholarship program made a rapid transition to an entirely virtual format for the summer of 2020.

Ecolab Experiential Education Scholarships provide sustainability-focused leadership and professional development activities for students with financial need. In the summer 2020 program, 21 students received Ecolab Sustainability Internship Scholarships and were placed with a virtual internship site focused on sustainability and/or environmental grand challenges. Additionally, one student received an Ecolab Student-Initiated Sustainability Leadership Project award, which gives students the ability to propose their own project. These 22 Ecolab Scholars completed approximately 2,420 hours of work total over the course of 10 weeks. A total of $30,250 was awarded to 22 students who represented five colleges and over 17 different majors.

Led by IonE’s Energy Program Specialist, Aaron Hanson, students attended weekly Zoom cohort meetings in which they could talk through their experiences and share their work. The cohort meetings focused on professional development through activities such as a resume-building workshop. At the end of the program, many students were able to see their community impact through the work that they accomplished. We were honored to have all 22 Ecolab Scholars demonstrate their resilience, flexibility and positivity throughout our summer program.

“Having a cohort of like-minded people to connect with every week has been really valuable for me,” said Trinity Ek, who received a Student-Initiated Sustainability Leadership Project award. “It’s been really nice to virtually see people who are going through the same thing that I am.”

Drew Birschbach, an Energy Democracy Intern for the Institute for Local Self Reliance, noted that the cohort meetings were “a really good source for bouncing off of other people, especially within breakout groups.” In summation, he noted that the Ecolab program provided “not only an experience for the summer, but a moment to be learned from and leverage for the future.”

Drew honed his professional skills by combining his two passions: journalism and sustainability. A lot of his time was spent editing material for the Institute for Local Self Reliance’s Local Energy Rules podcast. He said that maintaining a productive schedule in a remote work setting was challenging for him at first, but “being flexible and adaptable” were two very important skills he improved on during his internship.

Another student who discussed her professional growth was Maggie Keller, a research assistant for the Green Neighbor Challenge. In addition to conducting research, she was able to learn new skills in graphic design and GIS from her team members. She described her work as a “unique” project, an opportunity to “diversify [her] portfolio and skills.”

Stephanie Finch, who worked with Professor Jacques Finlay at the University of Minnesota, conducted stormwater research to understand the ecology of stormwater ponds fed by water runoff of urban developed areas. She considered her internship to be a huge learning experience, giving her “an opportunity to learn more about the intricacies of something that [she] never would have considered.”

Nisa Khairunnisa worked with the University of Minnesota Duluth and Ecolibrium3, collecting data from Duluth’s small businesses to analyze their creative economy. She discussed how the Ecolab program widened her perspective on the type of work she can do with her degree. “I went into my Econ degree without thinking that I would have a job related to sustainability at all, but in the past two summers I’ve had sustainability internships,” she said. “Being an Ecolab scholar now has pushed me into wanting to have more of a sustainability-focused career path.”

The Student-Initiated Sustainability Leadership Project recipient, Trinity, worked on a project with one of her professors, Patrick Nunnally. Through this project, she conducted a condition assessment of the St. Anthony Falls Heritage Trail. By visiting the trail, assessing its physical conditions and taking pictures of interpretive materials at the falls, Trinity collected information for the St. Anthony Falls Heritage Board to “encourage them to tell more diverse stories on the trail.” She added, “The biggest thing that I’ve learned is how important storytelling is. We can talk about numbers and data and hard facts all day, but the way to really engage people is through telling stories.”

For all of the students, the impact and value of their work was clear. As Nisa reflected on the importance of sustainability, she said, “The world is shifting, and I think that as time goes by sustainability will be more and more prominent, people will become more and more focused on it, and in the future we all have to start focusing on it more. It’s going to be something that is much more widespread. And starting earlier, starting now, is better than starting later.”