Menu
HomeNewsTop prizes for a map of micronutrients

Top prizes for a map of micronutrients 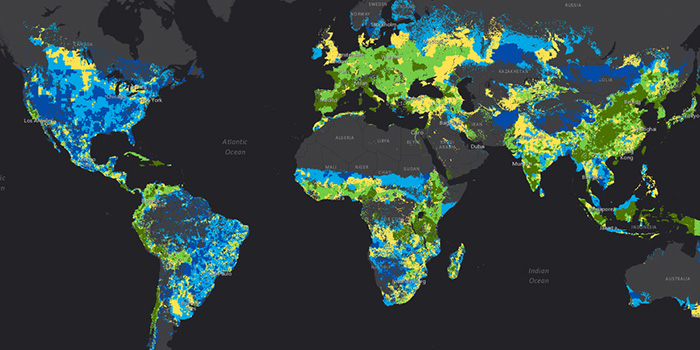 An interactive map exploring the distribution of nutrients across the world was the recipient of the 2017 U-Spatial Mapping Prize. Peder Engstrom, lead creator of the map, is a GIS scientist with the Global Landscapes Initiative at the Institute on the Environment and is also pursuing his master’s of GIS at the University of Minnesota. The map, which explores the correlation between the size of a farm and its diversity of nutrient production, illustrates the importance of small farms, especially in developing nations.

Engstrom compiled data from several different sources for the map, creating a comprehensive visual depiction of agricultural nutrient diversity globally. The story map, entitled “Diverse Farms, Diverse Foods,” illustrates that “small farms are the critical provider of micro nutrients for the food supply, especially for many of the world’s poorest and most vulnerable people.” Large farms, by contrast, “provide the majority of the global supply of oil crops and about half of total sugar crop production.”

The map was published this spring as a supplement to Food Matters, a series of interactive primers on our global food system. Engstrom used international GIS software company Esri’s multimedia Story Maps platform to create it.

U-Spatial, part of Research Computing at the University of Minnesota, provides support for spatial research, and it awards this distinction annually in several categories, from “Best Cartography” to “Most Provocative/Transformative.” The awards are sponsored by Esri President and UMN alumnus Jack Dangermond.

Andrew Urevig, a communications assistant at IonE and student of scientific interpretation and communication at the College of Continuing Education, was the winner of “Best Cartography” among all undergraduates. Urevig’s map shows the spatial distribution of beekeeping permits in Minneapolis. Frank Wagner, another master’s of GIS student with the College of Liberal Arts who has also served as a sustainability grad assistant with IonE, took the graduate-level prize for “Best Body of Work.”

Engstrom’s top prize included an invitation to attend the Esri User Conference, which took place in San Diego from July 10 though 14. In California, Engstrom’s map received a second round of recognition – winning first prize in the Conservation, Environment, and Sustainability category of Esri’s “2017 Storytelling with Maps” contest. Engstrom’s map was selected out of nearly 1,000 submissions worldwide.

Julie Berger is a summer communications intern at the Institute on the Environment.

A feast – and a forum – to fight food waste
Seeing is believing: A new tool to visualize climate change