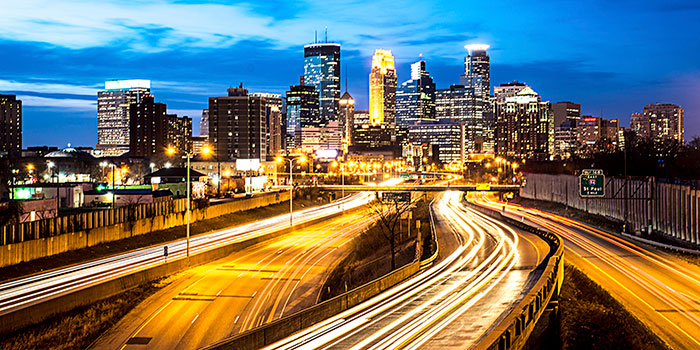 MINNEAPOLIS / ST. PAUL (11/14/2015) Some parts of the Twin Cities can spike temperatures up to 9° F higher than surrounding communities thanks to the “urban heat island” effect, according to a new study from the University of Minnesota.

The study, which was funded by the Institute on the Environment and published in the Journal of Applied Meteorology and Climatology, used a network of 180 sensors deployed throughout the Twin Cities metropolitan area in residential backyards and city parks to paint the most detailed picture anywhere in the world of how temperature varies with time and place across pavement-filled metropolitan areas and surrounding communities.

Recording surface air temperatures every 15 minutes from August 2011 through August 2014 across nearly 2,000 square miles and using U.S. Geological Survey data to fine-tune differences at the neighborhood level, the study uncovered several surprises. Among them:

“We’ve long known that heat radiated by buildings, roads, bridges and other structures keeps surface air temperature higher in cities than in surrounding areas. However, temperature is officially measured at just a few locations in most cities, so awareness of the extent and variability of urban heat island effects was limited,” said lead author Brian Smoliak. “Our study highlights the usefulness of dense sensor networks for urban weather and climate research with practical implications for human health, energy consumption, and environmental quality.” Smoliak began the project as a postdoctoral researcher in CFANS and is now an atmospheric scientist at the Climate Corporation in Seattle, Washington.

The more detailed understanding of urban heat islands provided by the study can help health professionals and others target efforts to protect people and infrastructure from heat-related problems, according to project co-leads Tracy Twine and Peter Snyder, associate professors in the College of Food, Agricultural and Natural Resource Sciences.

“This level of detail in real time can provide specific information to agencies tasked with protecting our citizenry during extreme heat events,” Snyder said. “It can also be used to identify persistently warm areas of the metro where green infrastructure projects could be implemented to offset some of the warming.”