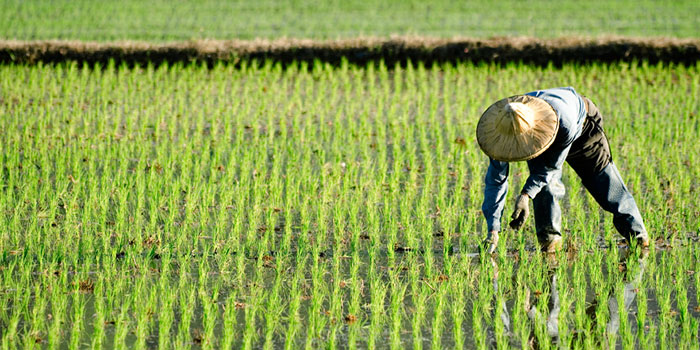 How will we continue to feed the world while reducing climate-changing greenhouse gas emissions? Global food systems contribute about one-third of human-induced GHG emissions, including carbon dioxide from peatland draining, methane from rice paddies and nitrous oxide from fertilizer. With demand for food and fiber expected to grow as global population increases and people become richer, reducing GHG emissions from agriculture is imperative. Where do we start?

To help answer this pressing question, researchers from the University of Minnesota Institute on the Environment used models and geospatial data to determine which crops and cropping practices are the biggest emissions culprits. In a paper published today in the journal Nature Climate Change, they report that peatland drainage and rice paddy cultivation together contribute about 80 percent of total global cropland GHG emissions.

The study provides the first subnational, crop-specific estimates of emissions from cropland management. It also delivers methods, data and maps for estimating emissions and reducing emissions from the agricultural sector. The authors focused not only on total emissions but also on emissions intensity, which compares GHG emissions to the corresponding amount of calories produced.

“With growing global competition for water, land and energy, it will be crucial to increase agricultural production while reducing environmental harm,” said Kimberly Carlson, the study’s lead author and an assistant professor at the University of Hawai’i, who did this work during her time as a post-doctoral fellow at IonE. “Knowing which crops, management practices and regions have the greatest emissions intensity makes it possible to target strategies to reduce GHG emissions.”

Peatlands are carbon-rich soils that emit CO2 when drained for agriculture. Although crops planted on peatlands produce less than 1 percent of global calories, they account for 32 percent of GHG emissions from croplands. The researchers suggest halting crop expansion into peatlands as an important way to reduce agricultural emissions.

Paddy rice cultivation emits methane, a greenhouse gas 34 times more potent than CO2 over a 100-year period. Rice is a food staple for billions of people worldwide. “The science on how to mitigate emissions from paddy rice while maintaining high yields is still evolving. Better understanding of this widely consumed crop is needed to provide effective strategies that reduce rice’s emission intensity,” said Carlson.

Fertilizers containing nitrogen are critical to sustain soil health and crop yields, but increasing fertilizer application typically increases nitrous oxide emissions. Nitrous oxide is an even more potent GHG than methane, with 298 times the global warming power of CO2. While nitrogen fertilizer application was the least emissions intensive of all management practices considered in the study, certain regions such as China, India and Vietnam, and crops such as rapeseed (canola) and potato, had high emissions intensity. “Growing crops less dependent on nitrogen and managing fertilizer inputs more efficiently are two key strategies to reduce nitrous oxide emissions,” said Paul West, a lead scientist at IonE’s Global Landscapes Initiative and a study author.

A major contribution of the research is its spatially explicit nature. Previously, global cropland emissions were reported at the national or subnational level for just a few crops or a single management technique, such as fertilization. “Now, we can compare emissions across different locations, crop types and management practices,” said Carlson.

“Adapting agricultural management practices has to be part of the solution to limit climate change,” said West. “Not producing food is obviously not an option. But how we manage croplands to get more food with fewer GHG emissions is an option.”

The study was funded with support from the Gordon and Betty Moore Foundation.