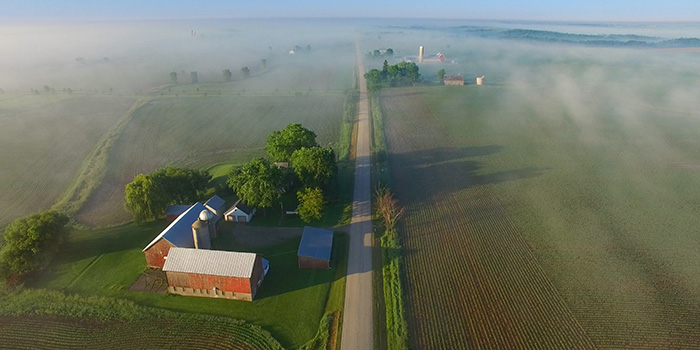 That different foods provide different essential micronutrients (such as calcium, vitamin A, and folate) isn’t news. But now we know which farms produce the most. New research published in the inaugural issue of The Lancet Planetary Health is the first to map production of micronutrients worldwide on farms of different sizes, spanning 41 crops, 7 livestock products, and 14 fish groups.

The study was led by Mario Herrero, of the Commonwealth Scientific and Industrial Research Organisation, Australia, and co-authors include Paul West, James Gerber, and Leah Samberg of IonE’s Global Landscapes Initiative. The researchers discovered that worldwide, small and medium farms (≤ 50 ha.) produce more than half (51–77 percent) of nearly all commodities and nutrients examined in the study. Other key findings include:

“We now have a broad view of which micronutrients are produced where, and what sized farms are producing them,” said West. This is a key innovation, because it’s estimated that by 2050 there will need to be a 70 percent increase in food availability to meet the needs of our growing global population. And increasing food quantity alone is not a solution: To achieve food security and nutrition for all, food systems must be agriculturally diverse and produce food of high nutritional quality.

“We can use this information to assess food and nutrition security,” said West, “as well as to develop and target incentives for supporting farmers and linking farming to improving human health.”

“Small and medium farms produce more than half of the food globally, and are particularly important in low income countries, where they produce the vast majority of food and nutrients,” Herrero noted to The Lancet. “Large farms, in contrast, are less diverse but their sheer scale ensures tradable surpluses of nutrients available to parts of the world that need them most. A sustainable food system that meets the needs of a growing population means we must focus on quality as well as quantity, and it is vital that we protect and support small and medium farms and more diverse agriculture so as to ensure sustainable and nutritional food production.”

A new interactive Food Matters report, Small Farms: Stewards of Global Nutrition?, complements the study and highlights the key findings. Published by the Institute on the Environment, Food Matters reports — including its graphs, infographics, and other data visualizations — are freely shared under a Creative Commons license.

Investing in the future of energy
Plan a sustainable schedule with these Fall 2017 courses!