Microgrids: Sustainability at an Affordable Price! 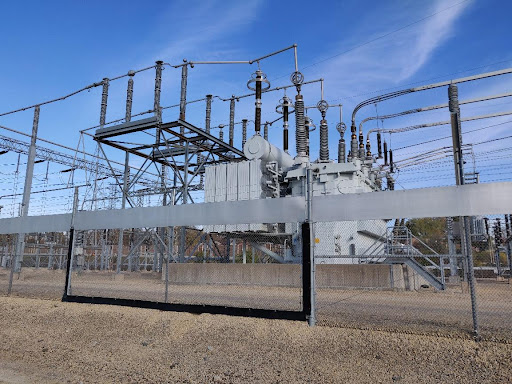 Pictured above is part of the Terminal Substation, in Minneapolis, MN. This facility provides and distributes power to a sizeable chunk of Minneapolis, but I’ll bet most of the residents couldn’t tell you what this actually is beyond “electricity stuff!”

People all around the US can’t imagine a life without electricity. The takeaway: nowadays, electric power and its comforts are far too often taken for granted. Millions of people across the world, beyond the scope of “my back yard” live their day-to-day lives without a speck of electricity, while those of us here in the US  are majorly setback and functionally inefficient in a situation without electricity.

In that vein, have you ever been left in the dark in bad weather? What if I told you it was possible to avoid these unexpected power outages, and potentially save money at the same time, in the same way?

It’s a hub that keeps everyone connected. A microgrid works in the same way as the large-scale grid, but typically with a single power generator. Microgrid as a term is somewhat misleading, as it tends to stir up thoughts of an enclosed system, which isn’t exactly wrong, but includes more than you’d think. A hospital operating on emergency power during a service outage is an example. This technically makes the hospital a microgrid, since it is now operating on a smaller scale with only itself within the system.

Now speaking of generators, we know there are many commercial locations such as grocery stores that use small, fuel-powered generators to provide electricity in the absence of grid service. Something that isn’t commonly explored is the use of renewables in microgrids.

Pictured above is the UMN Solar Pollinator Living Lab. Here, a large solar array was set up with the intent of also benefiting pollinators, most notably: bees. This solar farm is a microgrid microcosm itself; the curated habitat for insect pollinators stimulates flora growth, which in turn, leads to lower ambient temperatures for the solar panels, which will provide energy to us more efficiently! Even the bees can help! Although this isn’t a microgrid in the sense that it’s isolated from the grid, its significant contribution as a supplementary source cannot be ignored.

Back to the point, microgrids can be implemented with renewable energy just as well. With reduced dependence on large-scale utilities and incentives such as a solar tax credit, don’t you think having a local microgrid is a good idea? Not only can you lower your long-term energy expenses and get tax reductions, but you’ll have your own cushion to fall back on when the government fails you! In a country where everyone has their own car, wouldn’t it make sense that everyone can supply their own power as well? The difference here is that renewable microgrids would be a good thing, and could even push the transition to electric vehicles!

In some places, microgrids are already being implemented. One example is the St. Thomas Microgrid here in Minnesota, which uses a 48kW solar cell array and a 50kW biofuel generator. Remember, these don’t have to be standalone, microgrids are very useful as supplements to a larger grid as well! Microgrids wouldn’t work super well in places with no infrastructure in place, but they’d be ideal in places where infrastructure and utilities often fail. I daresay there is no place in the world that cannot benefit from a microgrid. So, what are you waiting for? Hop on the green train and help push the microgrid model now!

The first step is to connect with your local utility company and see what sort of renewable you can incorporate. Solar energy is almost always a possible choice, and even without a microgrid, using solar power for just your own home is a bigger step than you’d think!

I’ll leave you with one last thought: don’t you hate relying on someone else? Wouldn’t you feel better if you and some neighbors could supply your own energy? That’s a big benefit of microgrids, and I encourage you to do further research on your own!

What do we call this? A battery, right? We find these in objects we use every day, phones, remotes, and so on. They provide us with the luxury of storage. This is one of the biggest issues to tackle in implementing renewable energy and microgrids alike. I encourage you to take some time and think of ways to address this problem.