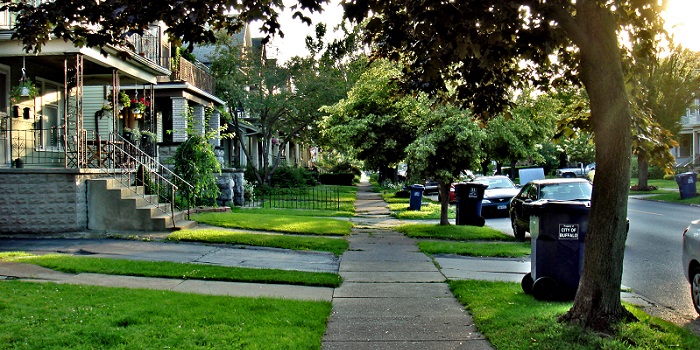 I grew up in a dense urban area in California, with minimal exposure to the outdoors, where neighborhood parks were both my only access to green space and a welcome relief from the heat that often radiates from city sidewalks and buildings in the summer. When I landed in Minnesota for my summer internship with the Natural Capital Project as part of the University of California, Santa Cruz’s Doris Duke Conservation Scholars Program, I embraced a chance to work on neighborhood parks in partnership with the Minneapolis Park and Recreation Board.

The Park Board was just launching a 20-Year Neighborhood Park Plan, including investments of $300 to $350 million to improve Minneapolis parks. I was intrigued and curious to hear how they would incorporate equity concerns. Correspondence with the Park Board provided insight into a data gap: There were few readily available neighborhood-scale analyses available in Minneapolis of key social and environmental indicators – such as walkability, green space and local microclimates – that would be needed to understand equity of the city’s neighborhood parks. With this in mind, I decided to focus my research on a neighborhood-scale analysis of urban heat and tree canopy, while taking into consideration social demographics.

A common definition of the Urban Heat Island effect or “UHI” is the heat measured in degrees above the baseline average temperature of a city or developed area. Expanding urbanization has increased the amount of built and impervious surfaces, which increase the absorption of solar radiation and exacerbate UHI effects [1]. UHI hotspots directly and indirectly lead to unsafe living conditions for people [2], including heightened temperatures and increased air pollution [3]. These effects are generally amplified during summertime when there is more solar radiation [2] and at night due to the slow release of heat absorbed by impervious surfaces [4]. Urban trees can mitigate UHI through shading, evapotranspiration and airflow, reducing temperatures and provide cooling benefits [5].

UHI effects and disinvestment in green space tend to have a disproportionate impact on certain communities and populations, leading to equity concerns [6]. During my summer internship, I sought to understand the relationship between UHI, urban vegetation, and social vulnerability in Minneapolis neighborhoods.

I used statistical analysis, including simple linear regressions, to compare nighttime UHI data from the Islands in the Sun Project with tree canopy cover, income and demographics, for each of the 87 neighborhoods in Minneapolis and created a poster to summarize my results.

I found that neighborhoods with greater tree canopy had lower UHI. These cooler neighborhoods were also wealthier and less diverse. In fact, I found that one in five or 20 percent of Minneapolis residents lives in areas where the nighttime UHI effect is greater than 2 degrees Celsius (3.6 degrees Fahrenheit). Forty-five percent of those residents are people of color; 30 percent are under the poverty line; and 11 percent do not have health insurance.

This study opens the door to numerous potential future research directions – including exploring other facets of social vulnerability to UHI such as age or availability of air conditioning in the City of Minneapolis. In addition to sharing my research with the Minneapolis Park and Recreation Board and this broader audience, I hope that I can develop future projects that stem from this initial analysis to ensure that cities, such as Minneapolis or my home city in California, continue to invest in equitable and accessible green spaces that help mitigate local impacts from urban heat and climate change.

Manisha Rattu completed a summer internship with the Natural Capital Project at the Institute on the Environment with a cohort of undergraduate students from the University of California, Santa Cruz Doris Duke Conservation Scholars Program in Summer 2017. She is a current student at Stanford University studying Earth Systems and Comparative Studies in Race and Ethnicity.

Read more about Manisha and her fellow scholars, who spent their summers at IonE, here and about IonE’s Natural Capital Project team here.