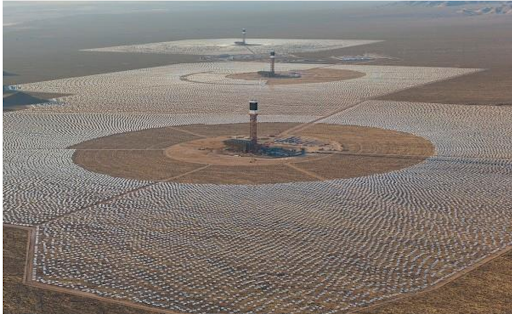 When looking into the future of renewable energy in the United States and in the world at large, the leading technologies being talked about currently are photovoltaic (PV) solar cells and wind turbines. While both sources of renewable energy are clean, reliable, and continually becoming more efficient, there are also other sources of renewable energy that are more efficient yet often get overlooked. One such overlooked source of energy is concentrated solar power or CSP. Like photovoltaics, CSP harnesses the sun’s light to produce electricity for the power grid. However, while photovoltaic cells utilize the quantum properties of semiconductors to produce electrical current, CSP uses reflection and heat to produce energy. While this may sound less exciting than the quantum mechanics of PV, CSP can be more efficient than PV cells and can continue to produce electricity when PV cells cannot.

In general, concentrated solar power produces electricity by using a mirror, or an array of mirrors, to direct sunlight to the water. The water is then heated up into steam by the sunlight, and the steam runs through a turbine to produce electricity. There are a few different ways to arrange CSP mirrors. One way is simply a single parabolic trough that concentrates sunlight on a tube of fluid at the focal point of the parabola. This can also be done with a dish-shaped mirror. Alternatively, flat mirrors can also be used to direct sunlight at elevated receivers, however these receivers are slightly less efficient as the mirrors are generally of lower quality.

While all those types of concentrated solar power are currently in use, the form of CSP that is the most efficient and produces the most energy is called a power tower. Power towers are tall towers with a heat receiver at the top. Arranged in concentric circles around these towers are hundreds of flat mirrors that automatically change their angle as the sun moves throughout the day. Using this single central heat receiver allows for operating temperatures of over 1000°F which is much higher than that of the other methods. The power output of these towers is similarly impressive. One of the largest displays of power towers in the world is called the Ivanpah Concentrated Solar Power Plant which is located south of Las Vegas just across the border into California. The Ivanpah CSP Plant contains three towers which produce a combined total of 392 MW of solar power which is enough energy to power 140,000 homes while avoiding 400,000 metric tons of carbon dioxide a year that would otherwise be produced with fossil fuel energy.

While these numbers are staggering, the largest benefit to CSP over PV solar comes from its ability to store heat energy once the sun goes down. Because CSP uses steam to produce energy, this allows for onsite heat and energy storage overnight. Even once the sun is down, the steam that had been heated throughout the day still remains at a high temperature, and thus can continue to be used for energy production throughout much of the night. The largest drawback to PV panels is that during the night when lights are on and a greater amount of electricity is needed for the grid, PV cannot produce energy. This requires immense battery storage or reliance on other sources of energy. However, CSP solves this problem, allowing for constant energy production all night, giving the power grid the clean energy it needs.

For places like Minnesota that are cloudy and don’t experience an abundance of sunlight throughout the year, CSP may not be the best choice for a source of energy. However, for regions of the world that experience high UV rays and low cloud cover, CSP might just be the energy source of the future. More efficient and more reliable than PV, CSP has already been working in places like California and the middle east, and more plants are currently being built. While PV solar will continue to become more popular and efficient as well, CSP is an excellent alternative for large-scale solar that can and should be used to diversify the power grid as we move towards a world of renewable energy.

Microgrids: Sustainability at an Affordable Price!
Nuclear Lies and Those Who Tell Them