The Sky is Not for Sale 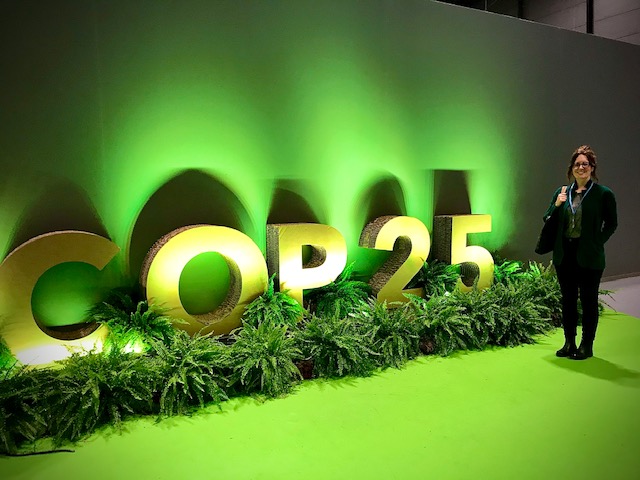 On this last day of the United Nations Climate Change Conference, December 13th, we bring you the wise words of Michelle Garvey, a faculty member teaching in Sustainability Studies and advisor to the Voices for Environmental Justice, a student group. She holds a PhD in Gender, Women and Sexuality Studies from the University of Minnesota, and her research focuses on frontline communities and intersectional issues. Her blog post is from Monday, December 9th.

I’ve arrived in Spain for week two of the UNCOP25 climate talks as part of the official UMN Delegation, and will be posting my observations here as part of my assignment.

The overriding concern driving my participation is the degree to which The Paris Agreement lives up to the demands of global frontline communities & climate justice goals. In particular, I will be watching for:

1) What’s going on outside official negotiations, where civil society denied entry to the UN makes their demands. Ten years ago in Copenhagen, I was part of this community, and we authored The Klimaforum People’s Declaration, “System Change, Not Climate Change.” It was a far more powerful and succinct plan of action than the UN Copenhagen Accord. These activists and Sky Protectors—including Friday’s 50,000 marchers led by Indigenous peoples from all over the world—have my attention.

2) Article 6 Implementation: I disagree with Article 6 of The Paris Agreement that carbon trading and offsets present viable pathways out of climate chaos. Carbon markets since The Kyoto Protocol have not only proven ineffective at diminishing GHGs; they exacerbate the vulnerability of frontline communities and fragile ecosystems. With Indigenous Sky Protectors, I agree the UN needs to “nix Article 6” because “The Sky Is Not For Sale.” Let us work toward ambitious carbon caps and taxation as fossil fuel extraction disincentives instead.

3) The Gender Action Plan (GAP). Women produce the majority of the world’s food; one-third of women’s employment is agricultural. Yet women only own 10-20% of Earth’s land. Climate change is a threat-multiplier: overwhelmingly marginalized, women and girls suffer first and foremost from wildfires, droughts, and rising sea levels. Indigenous women and girls suffer disproportionately when carbon market schemes kick them off ancestral lands. Conversely, when women’s agency—social & economic status, freedom to migrate, and decision-making ability—is improved, communities & families become more climate-resilient. How will the Paris Agreement “Act on the GAP,” especially when global dignitaries debating the future of our planet are overwhelmingly men? I will be using the Gender Climate Tracker (https://genderclimatetracker.org/gender-mandat…/introduction) as a litmus for assessing The Paris Agreement.

4) Green Climate Fund Reparations: pledges since the COP15 in Copenhagen made by “developed” countries—those who have historically profited the most from mining and burning fossil fuels—to compensate the most vulnerable nations via financing, capacity building, & debt-relief have, up to this point, remained hollow. Only 20% of the $30B pledged have been dispersed, and progress to continue reparations negotiations were reportedly blocked last week by U.S., Australia, the EU, Japan, and Canada. Reparations were made optional by The Paris Agreement; this week I advocate alongside so many Global South constituents for the “Polluters Pay Principle” and binding compensation commitments from the Global North.

5) REDD+: Though a firm believer in the potential and effectiveness of ecological restoration, Reducing Emissions from Deforestation and Forest Degradation, should it succeed, will be financed via carbon offsets. That is, communities will be paid by polluting corporations or countries to either preserve or restore forests that may otherwise be razed. Yet without stipulations against monocultured plantations, which are ecologically unsound, and without the ability for subsistence communities to continue sustainably tending their lands, REDD+ may only magnify climate chaos for frontline communities. Meanwhile, the value of carbon credits tends to remain lower than clear-cuts for ranching and other extractive development. And then, there’s the overriding problem of carbon markets as a whole: offsets provide excuses for industrialized nations to continue emitting-as-usual. In Copenhagen, I learned that “REDD is CO2lonialism.” This remains true, and I will be watching for significant reforms to this program.

Climate justice advocates, what should be added to this list? If your dream international Accord was universally ratified, what would it entail?

Bringing the Climate Strike to Campus
Capitalism and the Climate: Fault Lines at COP25