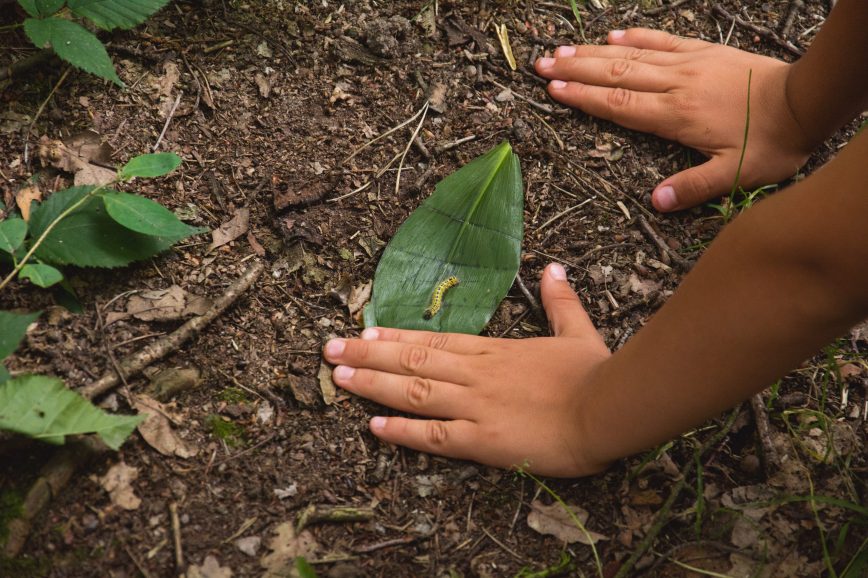 “Let’s take the children out of the classroom and put them by a tree…” opens a poem by Jonny Fluffypunk (aka Jon Seagrave) whose poem is featured in Hot Poets, a very cool project combining art and science that I learned about on the last day of my week at COP26 (the 26th United Nations Conference of the Parties Climate Change Conference). It was a perfect bookend to my week in Glasgow as a member of the University of Minnesota’s “week one” delegation, organized by the Institute on the Environment. On Day 1, I met Bran Howell from the Eden Project, a UK-based educational nonprofit and social enterprise that aims to create a movement that builds relationships between people and the natural world to demonstrate the power of working together for the benefit of all living things. Bran not only won me over by telling me how intentionally he uses the Research Digest that I co-produce with Ruth Wilson at the Children & Nature Network, but by expressing his and the Eden Project’s passion for engaging children, youth and families in nature in ways that build a strong connection to the natural world as the foundation for the development of an ethic of care for the Earth, adoption of environmental behaviors, and action and advocacy on climate change.

Connectedness to nature (C2N) – this strong emotional bond and sustained cognitive awareness of the interrelation between oneself and the rest of nature – has been demonstrated through research to be a necessary precondition for the development of pro-environmental attitudes. Those attitudes open us up to receive environmental information; then we can act by adopting environmental behaviors, advocating for climate policy, voting for candidates that support climate science, and more. Yet, I found discussion of the critical role of C2N to be absent from the discussions I attended, even those focused squarely on how we can develop environmental stewards through “education for sustainability.”

In one session, speakers from UNESCO and Education International offered an important, historic perspective on the role of education for sustainability in COP discussions. After decades of being very much on the periphery, education – though still under-represented in COP informational sessions and as a long-term climate strategy to which nations might make commitments – is beginning to receive more attention. Just as there has been progress here, speakers noted the important shift in the field from an emphasis on delivering environmental information to increase knowledge (which alone is not effective) to offering experiences that allow the application of knowledge to action through the development of agency. This is a major improvement.

I would argue though that the field, and the discussions at future COPs, have an opportunity to act on the evidence by more explicitly naming C2N as a foundational, long-term climate strategy.

Two intersecting trends illustrate why this opportunity must be seized. The first is “extinction of experience,” a term coined by Robert Pyle to describe loss of experiences in the natural world over successive generations resulting in greater alienation of the human race from the rest of nature. The second is the demographic shift toward greater diversity particularly visible in the US. People of color and lower income face barriers to access and engagement in quality natural places and nature-based programming. The implication of this demographic shift is that the communities expanding most quickly, and who will eventually compose the majority of the citizenry, are those least likely to have had the types of nature-based experiences early in life that ground a commitment to environmental preservation and climate action. This would pose a major impediment for the climate movement.

There are myriad ways to nurture children’s connection to the natural world. However, the UNESCO and Education International speakers made a strong case for policies and funding to support the integration of education for sustainability at all levels of formal education and across the formal curriculum – every student should be a climate student, every subject a context for climate knowledge and action. Such an approach could be transformative if an intentional approach to C2N – routinely involving meaningful and deep interaction with quality, biodiverse natural environments as part of the school day – provides the theoretical and pedagogical foundation.

Jonny Fluffypunk closes with a play on words giving a nod to the forest school with which he collaborated and was inspired by in creating his poem, “Let’s take the children out of the classroom and put them by the tree. Let the Forest School them, please.”