History in the Making: Standing Rock 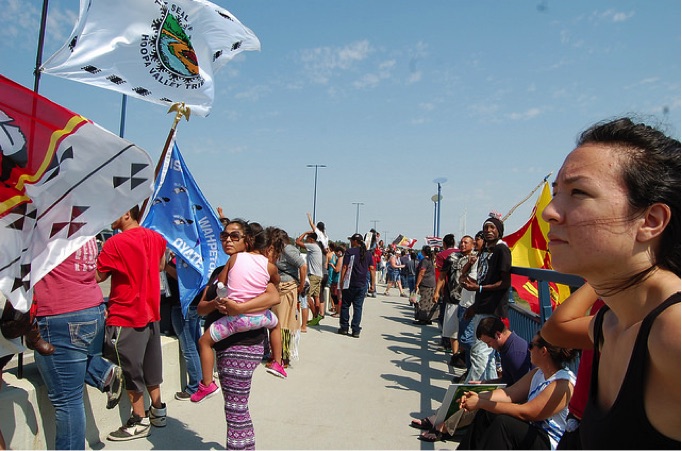 Back in August, my daughter Sora and I, both University of Minnesota seniors, spent four days at the Sacred Stone Camp near the confluence of the Cannonball and Missouri Rivers in Cannonball, North Dakota. The camp was started on April 1st by “Standing Rock Lakota Nation and ally Lakota, Nakota, & Dakota citizens, under the group name “Chante tin’sa kinanzi Po”, to block construction of the Dakota Access Pipeline (DAPL). DAPL would carry over 450,000 gallons a day of volatile fracked oil from the Bakken fields of North Dakota, running under the Missouri River, threatening the tribe’s only water supply and and sacred cultural sites. The camp has grown from a few people last April to about 1500 when I was there in August, spread over two camps, to estimates now of up to 7,000 people at any given time from all corners of the world, including celebrities like Mark Ruffalo and Shailene Woodley.

Just after returning from a Break Free Midwest action in Chicago with MN350 last May, I went to see some of the original camp founders speak at an event at the American Indian Center in Minneapolis. I just knew I had to go and commit my own personal time and energy to this issue that had brought these protectors from North Dakota, asking for help at a time when there were only a few people at the camp. Sora and I went to be allies of the tribes, to support efforts to protect the land and water from this pipeline and to keep fossil fuels in the ground.

We arrived at the camp after having to go 20 miles out of our way due to a roadblock north of the camp. Later, as white people, we would get right through, which was not the case for Native Americans. We pulled into the first camp we saw. I parked to look for a friend who was at the camp, and immediately encountered the feeling of entering someone else’s home or space, feeling out of place and having no idea if I was violating some unspoken rule. I thought to myself, how often have Native Americans felt this way? Or other minorities or marginalized people? I can, in no way directly compare my life as a white woman with that of a Native American person or person of color, but my discomfort was real, palpable and instructive. My friend was nowhere to be found and someone told us to head up the road to the second camp.

We pulled in the driveway of the Oceti Sakowin Camp to the security checkpoint and were told where to park and camp and that drugs, alcohol or firearms were prohibited. In four days at the camp, I saw none of those things. Sora and I gazed at the open spaces, waiting for someone to magically appear to show us where to go and not having any idea if we were “doing it right” or breaking any unspoken rules.We tromped through tall prairie grass, popping with fleeing grasshoppers and chose a spot. As we struggled to put up our tent in the prairie wind, it only took minutes for a few men to come over to help and let us know where to shower, eat, and get water and blankets. The hospitality did not let up the entire four days, with many offers to share meals with our neighbors – Louis, Charles, Fred, Lucas, Sonny and many more, mostly from the Lower Brule Sioux Tribe or Kul Wicasa Oyate in Lakota. As we struggled with how to navigate this camp community as non-natives, feeling awkward, unsure, out of place, we knew this was our time to be ok with feeling discomfort. And every time we pushed past our reticence or accepted invitations to share meals or fires, we were rewarded with magical new experiences and connection. Sora and I went to give support and be allies, and what we got in return was so simple and profound. We were the ones nurtured and supported in immeasurable ways.

There are a couple thousand people camping at the site at any given time, with over a hundred tribes represented, and supporters native and non-native from around the country and the world. I heard so many Native American languages, in prayer, conversation, celebration and in story. There was a fire every night in the main camp area where Sora and I would listen to elders and anyone who wanted to sing, drum, tell stories, or relay information about the pipeline and the environmental impact and process of stopping it – sometimes in English and often in their first language. We stayed as long as we could around the fire and then could hear them from our tent as we drifted off to sleep, under the clear sky packed with more stars than Sora had ever seen.

History was made at the camp, as representatives of the Seven Council Fires of the Great Sioux Nation gathered all together for the first time in 150 years. I feel privileged and honored to witness this remarkable time and to hear the amazement in the voices of the native friends we made, as they described this special moment. We got to witness ceremonies that are usually not open to non-natives, with friends helping us understand not to take pictures, cover our knees and that menstruating women could not attend due to their powerful effect.

We sat by our tent neighbor’s fire one of our first nights, watching a group of younger people play the Hand Game, a guessing game that predates recorded history and is played in two teams, using counting sticks (bones in the old days). I never figured out exactly how it worked, but it was mesmerizing to watch as one person drummed and sang in Lakota to accompany the game. I was generously offered a chance to look into another world.

Sora and I took a turn volunteering in the outdoor kitchen that feeds everyone in the camp three times a day from donations to the camp, that are streaming in. The head chef this day was Nantinki Young, or Tink, as she called herself. She blew me away with her skill, patience, and kindness as she organized meals with an always-shifting number of people to feed, supply of ingredients and volunteers. She stopped mid-shift at dinner to make all the volunteers a delicious tea from a leaf that she only described as powerful medicine. Tink reminded us to take care of ourselves as we volunteered, even as she moved nonstop through the evening.

Sora and I helped prep food for dinner and chopped until our hands blistered, as we listened to many languages and drumming groups honor, celebrate and tell stories throughout the day – one of the most remarkable of my life. Sora ended up helping to serve food to the hundreds of people at the camp until late in the night, along with many other volunteers. We had a seven-year-old helper, Tiana, and she stole my heart. She grabbed a knife and started chopping zucchini alongside Sora for the next two hours, as another girl assured me native kids learn to use knives early.

All the cooking was over fires, and in my photos you can see one of the giant soup pots they used, stoked by men continuously chopping wood. Any health department would have walked in and been wide-eyed at the lack of usual kitchen sanitation amenities, but no one got sick and everyone did their best to keep things clean – even when they butchered a donated steer quarter on a table behind the kitchen.

By now, news of the camp has spread worldwide and support from celebrities, citizens and activists is pouring in, at the same time that law enforcement activity has escalated. Construction gets closer to the Missouri River every day, as hundreds risk arrest with peaceful demonstrations. The day after our election, as our Clean Power Plan is threatened with repeal and many in our nation are in shock, I think of the words of my friend Kerry Wang: “For the first time, on a large scale, many of you feel the real threat of what Indigenous people all over the world and in particular in this country have endured since the beginning. But when we look at what is going on at Standing Rock, we see they are still there, still standing tall and strong, not backing down”. I feel strongly that we have to not back down in our protection of Earth, making sure fossil fuels stay in the ground and environmental justice prevails, for the people of Standing Rock and the future of humanity.

Video: Biodiversity is good for the economy
Wind and solar energy projects could bring 5,000 new jobs to rural Minnesota