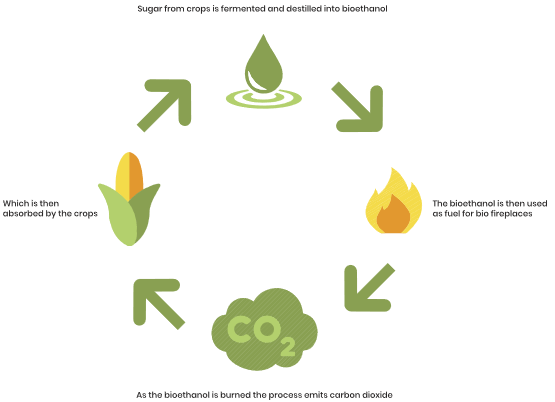 Biofuels are an effective alternative to gasoline. Biofuels not only burn cleaner than gasoline by reducing GHG emissions but are also cheaper with improved farming methods. With the implementation of biofuels, our green economy can shift to a low carbon-intensive environment. Many efforts are being made globally to diversify energy sources with biofuels and to reduce greenhouse gases from oil. Biofuels burn cleaner than gasoline by reducing GHG emissions. Ethanol is a biofuel that readily biodegrades without harming industries. On the other hand, ethanol can increase emissions through farming of biomass crops (corn-based ethanol). If we take this into consideration, we can mediate this issue with improved farming methods and renewable energy when producing biomass from crops. Advanced biofuels can be an even more effective alternative to gasoline through a trend showing that carbon sequestration outweighs emissions in energy crops in GREET Models.

There are 3 generations of biofuels. 1st generation biofuels come from food, so they also have to compete with the population’s limited food supply. 2nd generation biofuels come from non-food biomass, but is more elaborate and requires more energy and materials. 3rd generation biofuels are low-cost, high-energy, and completely renewable sources of energy. They involve using algae for oil extraction and biodiesel production. An advantage of this includes that algae can survive in almost any environment and this whole cycle is entirely renewable. In terms of biofuel technology, the positive economic outcome is determined by technology breakthrough in terms of liquid separation and ethanol recovery, effective production of bioethanol (continuous fermentative systems), production of fertilizer on remaining stillage/digestate (no waste generation), and any other additional outcomes (reduced GHG emissions, increased livestock and agricultural production, etc.).

Liquid separation is important in the purification of biofuels. Liquid separation can be done by two different techniques: 1) mixing of the phases in either purpose built equipment, mechanical mixers, static mixers where pressure energy is applied to increase the surface free energy of the fluids to produce droplets, or in shear flow of the fluid mixture in pipes or 2) The cooling of a saturated liquid below the solution point so that the solute phase condenses out of solution resulting in the formation of a second liquid phase.

When producing biofuels, such as ethanol from corn, improved farming methods need to be taken into consideration. There are many harmful effects with chemical fertilizers such as waterway pollution, chemical burn, increased air pollution, soil acidification, and mineral depletion. A huge first step in improving our agricultural methods is by taking a look at chemical fertilizers. Instead of using chemical fertilizers, fertilizer from manure can be a more natural method. By turning waste to value via high tech separation, a no waste generation production of fertilizer can occur. Fertilizer from manure adds organic matter to the soil which may improve soil structure, aeration, soil moisture-holding capacity, and water infiltration. With high tech separation, manure can be turned into fertilizer and pure water.

Effective production of bioethanol, through continuous fermentative systems, is the last step in having a positive economical outcome. With proper liquid separation and high value fertilizer, bioethanol can be produced with low cost and high efficiency. We can enhance the ethanol production with continuous fermentation in a two-tank system. Continuous fermentation with the feeding sugar concentration of 160 g/L at r = 0.9 and dilution rate of 0.2/h achieved the highest productivity with less than 2% of the unconverted sugar in the product steam. These various methods, reduced greenhouse gases, increased livestock and agricultural production, etc. can also result in addition to the effective production of bioethanol.

There are many benefits with using biofuels with decreased electricity through improved agricultural practices. Reuse of the same land, increased soil carbon sequestration, and reduction of fertilizer are all ways of improving biofuel production and reducing GHGs. Improvements that have already been implemented with biofuels have resulted in low carbon intensity, valuable byproducts, and are cheaper overall.

Air Source Heat Pumps: Installers and Homeowners
Utility Municipalization: Empowered by the People, For the People