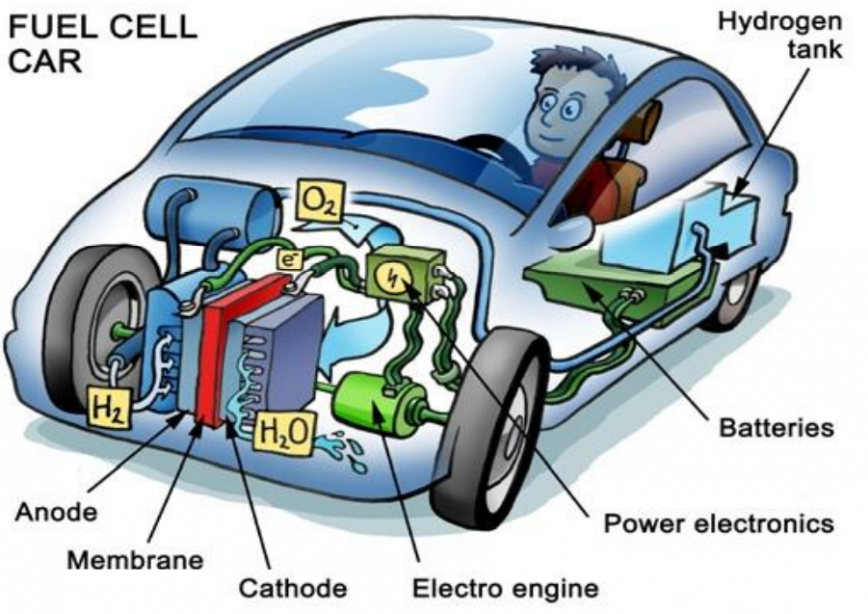 In our quest to move away from fossil fuel dependency, transportation is a critical component. Currently, the majority of vehicles run on gasoline, which is produced using fossil fuels, and which, unsurprisingly, is responsible for lots of harmful emissions and pollution. A quick look at cities with large vehicle densities like Shanghai, China or Mumbai, India and we could see that this pollution issue is not invisible at all – the dirty smog lingers and haunts the very air that people need to survive. But the world cannot stop moving, so we set forth to find better means of transportation. In that quest, vehicles powered by Hydrogen Fuel Cells offer what seems too good to be true: a car that runs on electricity whose only exhaust is water. While some have hailed these vehicles as the way to go, others have shunned them as nothing more than mere marketing ploys playing on sensations. And the latter seems to hold up well to an extent: despite its promises, Hydrogen Fuel Cell Vehicles are not as prevalent as Electric Vehicles (EVs) using Lithium-batteries, and it seems they have vanished from the public mind altogether after a few years. So, what are these vehicles and how do they fit in the transition of our transportation towards a greener direction?

As the name implied, a Hydrogen Fuel Cell Vehicle is a vehicle that runs on hydrogen. The main “fuel,” at least in the sense that gasoline is “fuel”, is hydrogen. Hydrogen, in the form of H2, is the gas that is stored in the fuel tank. The Fuel Cell itself is a unit that handles the reaction between the gaseous H2 and the airborne O2, which fundamental chemistry tells us will make the “colorless, odorless, and deadly at high dosage” Dihydrogen Monoxide – in other words, H2O or water. Here is a closer look at the fuel cell unit:

To keep the tech talk brief: The Polymer Electrolyte Membrane (PEM) separates H2 and O2; due to the platinum catalyst, H2 is broken down into positively charged protons (which can pass through the PEM) and negatively charged electrons (which is redirected through an external circuit); eventually, all these components must combine and meet O2 at the cathode and create the all too familiar H2O. It is the separation of the electrons that creates the electricity running through the external circuitry and powering the vehicle. It is technically correct to refer to a Hydrogen Fuel Cell Vehicle as an Electric Vehicle (or EV). The difference between this and a battery-powered EV is the source of the electricity, Lithium-battery vs. Hydrogen.

So, Are they any good, and where did they go?

It would seem on the surface that Hydrogen Fuel Cell EVs are clearly superior to their Lithium battery counterpart. There are two major, and that means MAJOR, advantages that PEM Fuel Cells have over Lithium-battery. The first one is weight: compressed H2 has specific energy of 40,000 Wh/kg, and in comparison, the average value for Lithium-battery is 167 Wh/kg; in other words, for the same mass, hydrogen gives 236 times more energy (Sammann). This is a huge advantage over Lithium-battery, a technology that drives designers and engineers to difficult trade-offs as the battery weight scales with the energy usage – more mileage means more energy, more energy means a bigger battery weight, which then requires more energy to carry around this extra weight. Furthermore, while Lithium-battery cars can take hours to be fully charged, refueling for Hydrogen EVs can take as little as 5 minutes (Sammann); the long recharging time is a huge deterrence to potential customers of EVs, and it makes sense that they would like to spend 5 minutes, not 3 hours, on refueling their cars.

So where are the Hydrogen cars?

As it turns out, there are several roadblocks when it comes to making Hydrogen EVs a reality. Currently, we have no efficient method of creating mass amounts of hydrogen on an industrial scale. Current methods such as steam reforming or electrolysis of water requires a huge energy input, which has to be generated from somewhere; for steam reforming, the hydrogen we end up with yields less energy than the natural gas we start out with, and for electrolysis, even if it can be fully powered by renewable sources, we are still looking at more energy required than steam reforming and a 30% loss (Sammann). Post-production, we are looking at several sinks of energy efficiency: the storage and transportation of large quantities of hydrogen (involving physical and chemical processes) vs. more efficient transmission of electricity (an electrical process through the grid), the conversion of this energy into the electricity for the vehicles, and finally the efficiency of the electric motors that directly enables the vehicles’ movement. Overall, calculations put the efficiency of Hydrogen Fuel Cells – that means effectively higher cost and lower viability, and thus the market discards Hydrogen Fuel Cells for Lithium-battery, at least that’s how it seems for now.

Does this mean the end for Hydrogen fuel cells?

Personally, I don’t think so. Even the superior choice, Lithium-battery, is running into its own roadblocks. In fact, a large part of the transition towards renewable energy is investing into research and development of new technologies. Remember Moore’s Law and how technology seems to be advancing on an exponential scale? Yeah, at that rate, it would be impossible to know what shapes future technology might take. Perhaps we will find an efficient way to harness the power of hydrogen and make this “car that runs on water” a reality. Or perhaps, with advances such as evolution of the supercapacitors, battery technology will come out on top and leave Hydrogen Fuel Cells behind. Maybe we will put hydrogen fuels in more situational uses, such as using it to power planes (which, if you think about it, might be a lot easier than using it on vehicles) and Hydrogen Fuel Cells could have its own place in the energy transition.

What can we, then, as individuals, do, as part of this transition? In my opinion, increased support for EVs will facilitate growth of the industry in that direction, so giving EVs a more fair, long-term consideration when deciding on your vehicle purchase would be a great start. That said, like with Hydrogen, let us do proper research and not sensationally jump onto catchy bandwagons like “cars that only emit water.” A sustainable future cannot be built on sentiments alone, only facts, science, and rationalism.

Fear of the Unknown Energy
Going from Fuel to Charge